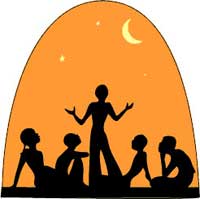 The art of oral storytelling reaches far back in history. Humans have told stories as instinctively as we’ve taken care of our most basic needs. But somewhere along the way, as family members migrated to distant cities, and modern inventions like the air conditioner drove us off our communal sidewalks and into our cooled, isolated homes, storytelling faded away from American mainstream culture.

During the last few years, thanks to the popularity of such programs as NPR’s This American Life, and The Moth, a non-profit literary organization, storytelling has experienced a bit of a renaissance. Download a weekly Moth podcast and hear a story about a man overcoming a childhood stutter, or a woman growing up with deaf parents. The stories are true and personal, and always about something the storyteller felt they had to share. Someone might relive a happy milestone, talk about getting fired from the perfect job, or share their pain at losing a loved one.

Or, even better than downloading a podcast, attend one of The Moth’s live events, a StorySLAM, where you can drop your name in a hat and be chosen to get up on stage to tell your story to an audience of about 200 people. The storytellers who end up on stage are not necessarily seasoned performers. While some are, others are people who just feel like they have a story to share, maybe to get the reaction of a crowd full of strangers, or for therapeutic reasons. The audience seems to understand the difficulty of telling a personal story to a roomful of strangers, and is always very supportive. As long as people are willing to follow The Moth’s three simple rules—tell a true story, without notes, and within five minutes—they can be a StorySLAM participant. For more information, check out www.themoth.org. If you have a good story to tell, and crave an audience to hear it, this is the place to be.

In smaller settings, trading stories with friends and family can remind us of the people and events that accompany us through our lives. I recently attended two weddings, both of which were fun and elegant, and full of love and well-wishes from family and friends, but the most distinctive element that bound these two events together was the role that storytelling played.

The first wedding finished early in the evening. Many local guests went home, but the out-of -town people changed into more comfortable clothes and gathered in the newly married couple’s honeymoon suite. Someone suggested that if anyone had a good story to tell about the bride or groom, they should share it. A college friend of the groom’s talked about a skiing trip they had taken together, and how they bonded over the dangerously high ski jumps. Then a coworker friend recounted how the groom made someone cry at work once, just by giving them a stern look. Up until that evening, I had gotten to know the groom mostly through the filter of the bride, so it was nice to get to know a different dimension of him through friends who knew his other side.

The bride’s friends began telling stories, and when her younger brother entered the room and heard what was going on, immediately started telling the group about how she almost let him drown when he was five years old. He told like it he’d been burning to tell it for his whole life, to set matters straight. He was the only one in the room who knew her when she was a small child, and his story painted a new picture for those of us who met her when she was already grown up.

At the second wedding, the bride, Nora, asked everyone who was attending the rehearsal dinner to bring a story. The resulting anecdotes were funny and touching, and each story seemed to spark another person’s memory of the bride or groom. Nora’s simple request helped people get to know each other better before the wedding day, and prevented that kind of lull that can happen when you gather people together from two different families who don’t really know each other.

There’s a storyteller in every group. My husband is one of these, and his talent extends to inspiring others to do the same, making people realize that everyone has a story to tell. Prior to their weddings, both brides had been part of occasions where he encouraged people to tell their favorite stories. The feeling of community and togetherness that evolved was a goal they both had for their own weddings, and they knew that sharing stories was one way to achieve that.

With the holidays coming up, it might be an interesting experiment to ask everyone to bring a story to the family or friend gathering. You might tell about something amusing you did when you were younger and never had the nerve to tell your parents before, or a story about a sibling you think they may have forgotten.  It could be a travel story, the tale of a broken-heart, or an anecdote from some crazy job you had in college.

Certain families lean naturally towards storytelling when they get together, but for others who don’t, it might allow members to break out of the prescribed roles we have grown up with and often find hard to escape. No one’s family is perfect; everyone has complicated family issues of some kind, and maybe it’s the most complicated families that could benefit from this. It might change the family dynamic in a positive way, giving that talkative aunt an outlet for her idle chatter, or a lending a voice to an odd uncle who never says much. Either way, it’s likely to bring everyone together at least to listen, and remind everyone, like it or not, how deep their connections are.