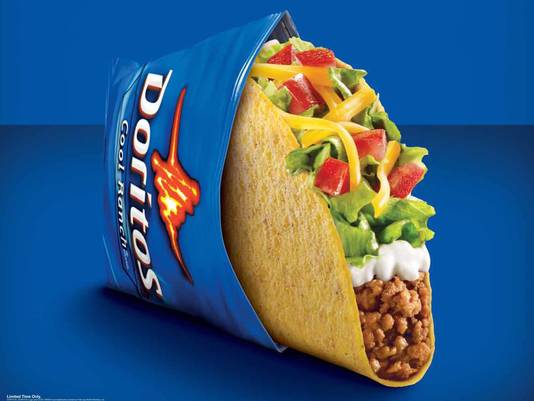 Taco Bell has dropped another food bomb on American culture with the launch of their Cool Ranch Doritos Locos Taco earlier this month. This newest creation made of beef, lettuce, tomato and cheese stuffed into a taco-sized Cool Ranch Dorito has once again sent junk food lovers into a state of gluttonous food ecstasy. Taco Bell already achieved rock star status after the Doritos Locos Tacos became the fast food giant’s most popular product ever after it premiered in 2011.

“Why not!” Taco Bell executives seem to be screaming from their corporate tower, whose walls are papered with money from the 325 million Doritos Locos Tacos they sold in 2012. That works out to one million per day and because of it, Taco Bell plans to open 2,000 new restaurants over the next ten years. People went so nuts over the Doritos Locos Tacos that the company will have to hire an estimated 15,000 taco slingers, and as a result, some people are saying that Taco Bell can save the economy.

Cool Ranch Doritos Locos Tacos are a classic American example of taking innovation just a bit too far, not understanding that just because you can do something, doesn’t mean you should. And with a straight face, Taco Bell advertises this pseudo-Mexican mishmash along with their slogan: Live Mas, and recommends pairing it with Mountain Dew Baja Blast, so that if the taco doesn’t immediately send a freight train of grease to your heart, the syrupy sugar blast will help it to speed up. At least the slogan encourages people to live more, not longer.

What happened to food? Nutritionists and food journalists have been exposing for some time the consequences of the standard American diet. Everything has too much salt and grease, and is laden with unreadable processed chemicals, so that even when the label says it’s healthy, it’s not. Go-Gurt? If your kid has to squeeze a tube into his mouth for consumption of anything, it’s probably not the most nutritious.

What I’m really afraid of is that, pretty soon, people will forget what real food tastes like. Lettuce or carrots or even whole wheat bread will fail to produce feelings of satisfaction or fullness in people who are used to a more neon-colored, fat laden diet.

This first world problem we have of always inventing new and more dangerous foods has led to the diminishment of real food and the increase of what food journalist Michael Pollan calls “edible food-like substances,” products like mashed potato flakes, canned pork and beans, and the king daddy of sponge-cake longevity, Hostess Twinkies.  These are foods that, even though they are edible, contain very few ingredients that can be identified as actual food.

And if this, then what next? Why stop here? Why not toss all your favorite junk food together and never have to go without it again? How about a buffalo chicken wing sandwich with two slices of pepperoni pizza instead of bread? Or an ice cream sandwich using donuts instead of those boring brown wafers (OK, this is already being done and Holey Creme should be arrested, or awarded the Nobel Prize).

Let’s leave Taco Bell’s newest creation where it belongs—to the realm of late-night drunk food, which people can enjoy moderately at an early age and then hopefully develop the common sense to lay off. Let’s not let it be the thing that saves America.