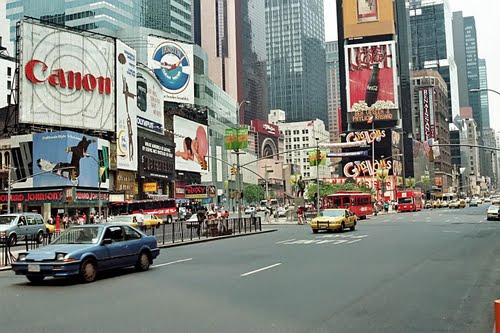 A new two-part exhibit from the New Museum functions as both a history lesson and an exercise in either nostalgia or retro-novelty, depending on what generation you’re a member of.

The first part of the exhibit, “Recalling 1993,” has transformed thousands of Manhattan payphones into living time capsules. If you pick up one of 5,000 phones stretching from the Financial District all the way up to 215th St. and dial 1-855-FOR-1993, you’ll hear a well-known New Yorker tell a story related to the neighborhood you’re calling from.

For instance, a payphone in Chinatown recounts the story of the Golden Vulture, a cargo ship that was smuggling 300 undocumented Chinese immigrants to the city when it ran aground near Queens, forcing people to jump ship and swim for their lives.

Further uptown, a phone at the entrance to the A train describes a 16-year old boy who faked his way into the subway conductor’s seat, completing almost the entire A train route before getting caught. He was arrested, but vowed to become a subway driver someday.

In conjunction with “Recalling 1993,” the New Museum, at 235 Bowery, is currently featuring an exhibit named after Sonic Youth’s album of that year: “NYC 1993: Experimental Jet Set, Trash and No Star.” According to the museum, 1993 was a turning point for the city, when progress began leaping forward in terms of lower crime rates, cleaner streets, and more adequate and far-reaching social services.

To put a tick on 1993 in your mental timeline, it was the year of the World Trade Center bombing. Pornography businesses in Times Square were shuttering up and making way for the blandness of corporate America. The New York Times announced the upcoming debut of the city’s first Starbucks, with an article that instructed readers on the ingredients and pronunciation of “latte.”  Politically, the city’s first and only African-American mayor, David Dinkins, was on his way out, and Rudy Giuliani was on his way in.

Babies born in 1993 are now college students name Tyler and Brandon, Brittany and Jessica, and have in all likelihood never had use for a payphone before.

This little scavenger hunt  for history reminds me of Antony Gormy’s 2010 public art instillation, where man-sized statues were perched atop the edges of a series of buildings in the Flatiron District. The effect was that, instead of the typical walking-while-texting danger, it created a similarly annoying but refreshingly different walking-while-scanning the skyline danger. Like the payphone project, though, it got people out of their heads for a minute to think about where they are in space and time, instead of living on another virtual plane altogether.

The exhibit reminds us to pay a little extra attention to our surroundings; it’s New York’s version of making us stop and smell the roses, even if those roses happen to be archaic relics from the Dark Age that is now known as life before cell phones.