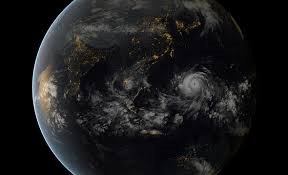 The Philippines, a country of about 97 million people, are all too familiar with devastating storms.

Typhoon Haiyan, a category five, made landfall in the Philippines early Friday morning. With winds reaching 195 mph and gusts as strong as 235 mph, Haiyan was most likely the strongest tropical cyclone to hit land anywhere in the world in recorded history. As of right now the death toll is expected to exceed 1,200 people, due to the amount of bodies washing up on beaches and littering the streets, and those who have been declared as missing.

Tacloban, one of the typhoons most damaged areas, is absolutely devastated. No building, in the city of 200,000 people, appears to be standing and intact and all communications, except satellite phones, were down. Medical supplies, food, and water were scarce and the promise of looters is very high at this time.   The storm has affected 4.3 million people in 36 provinces, and displaced more than 340,000 people from their homes. Haiyan is so large in diameter that clouds from it are affecting two thirds of the country, which stretches more than 1,150 miles. Tropical storm force winds are extending almost 150 miles from the typhoons center.

Haiyan, known in the Philippines as Yolanda, appeared to retain much of its force as it moved west over the country. In an interview with CNN, Governor Roger Mercado of Southern Leyte, a province in Eastern Visayas, said Friday morning that, “all roads” were impassable due to the amount of fallen trees scattered everywhere. “We don’t know the extent of the damage,” Mercado said. “We are trying to estimate this. We are prepared, but this is really a wallop.” Before the typhoons arrival, thousands of people had been relocated away from particularly susceptible areas in Tacloban City. Tacloban is situated in a coastal area of the region that took the initial brunt of the storm.

President Benigno S. Aquino III warned the nation that it was facing a “calamity”, as the storm churned towards the Philippines Thursday. “Let me repeat myself: this is a very real danger and we can mitigate and lessen its effects if we use the information available to prepare” Said Aquino. With all the planned evacuations and preparation of homes, and buildings, not much was saved. According to an initial report from an aviation officer, the Deputy Director General of the Philippines Civil Aviation Authority, said early Saturday, “bodies were lying in the streets of Tacloban, everywhere you look.”

Haiyan is far more powerful than Hurricane Katrina was before it struck the United States with devastating effects in 2005. According to the Weather Channel, if Haiyan were located off the United States East Coast, the massive storm would stretch from Florida to New York.

Haiyan is headed across the South China Sea towards Vietnam as a slowed down category three storm with 115 mph winds after devastating the Philippines on Thursday and Friday, according to Dr. Jeff Masters. Masters, a blogger and co-founder of the Weather Underground, has been following and blogging about the typhoon since it was first discovered making its way to the Philippines.  With a death toll of 1,200, which is rising by the hours, Haiyan is already ranked as the eighth deadliest typhoon in Philippines history.

The Philippines are no stranger to the extensive damages of natural disasters. This is the third time in the past year that the Philippines have set a new record for the most expensive natural disaster in history. They just cannot catch a break. The record, initially set by Typhoon Bopha of December 2012, was 1.7 billion dollars in damages. That record was beaten in August 2013 by the floods in Luzon, caused by moisture associated with Typhoon Trami, the amount eventually added up to 2.2 billion dollars.

Journalists who were in the area at the time have been posting video clips of high damaging winds, ripping through streets, debris blowing everywhere, and trees bending almost in half. Because there was no large land mass to slow down this beast, the typhoon ravaged through the island nation. Haiyan weakened on Saturday, giving the people of the Philippines a chance to assess the damages, giving way to very powerful, and saddening images of people who have been devastated by this disaster.

Though this disaster is overseas, it is important at this time for anyone who can’t physically be in the Philippines to help. Make sure you contact organizations who can do what you cannot. Big organizations such as UNICEF, Philippine Red Cross, and Americares are among the many who are excepting donations, and volunteers.