Why Is America in Love With The Celebrity Trainwreck? 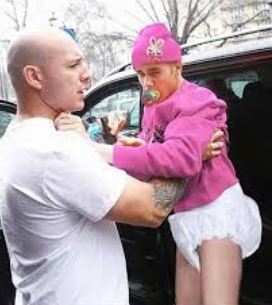 Can we please stop coddling celebrities when they act up? After this latest Justin Bieber scandal, two times for this brat, I have reached my breaking point with young celebrities acting like they can get away with everything. When Lindsay Lohan was acting out, we placed the blame on her mother. When Paris Hilton acted wild, we blamed her money. Britney Spears shaved her head, and we decided she was mentally unstable. Justin Bieber acts up, he’s just young. I was his age once, I never found myself in a yellow lambo high and driving drunk. Why should we make excuses for these people? They do nothing for us, but put others in harm’s way with their outlandish and inappropriate actions.

Justin Bieber is 19 years old, driving Lamborghinis drunk and high, and young girls are defending him because they believe in him. He’s a role model, we put him on a pedestal, and now we look like jerks for it. The more money we allow these young irresponsible kids to make, it seems the more mistakes they make. Every time Bieber gets a new endorsement or comes out with a new ‘catchy’ tune, we give him more money, which allows him to act even more spoiled and privileged.

We tend to give celebrities a lot of leeway when it comes to their actions and careers. It seems as though we treat them as superior to ‘regular’ people, and while they make more money and act out, we keep defending them. In the case of Lindsay Lohan, she got multiple D.U.I’s, stole a $2,500 necklace, and violated her probation repeatedly, but for some reason she got away with all of it, with only a slap on the wrist and two weeks of house arrest. By allowing these celebrities to get away with theft, drinking and driving, and excessive drug use, we are showing young people that this is completely acceptable behavior that is taken lightly.

Young adults these days tend to gravitate towards celebrities because of their flashy lifestyles and their ability to appear accessible because of social media outlets such as Twitter, Facebook, and Instagram. People are able to come closer to speaking to, and seeing their favorite celebrities outside of their usual spotlight, which makes the possibility of becoming a celebrity more appealing. Social media has allowed celebrities to be closer to us than ever, and we eat it up. Watching young celebrities ruin their reputations, and turn fame into a joke, has made it easier for me to turn away from gossip and entertainment pages. Instead of praising these people for their screw-ups, and laughing at their expense. We should be encouraging them to use their fame positively, by helping others, and not glorifying their bad behavior.

The real people in this world, who are helping others, and doing good for their society and their generation are the ones that should be praised, and talked about. As opposed to these young screw-ups who don’t receive consequences for their idiotic actions. There was a ninth grader in Pakistan who tackled a suicide bomber at the main gate of his school, instead of backing off he saved many lives, in turn losing his. This selfless act is incredible, but we don’t hear about it because everyone is more worried what Miley Cyrus will be wearing tomorrow. The 17 year old boy who noticed a car sinking in a reservoir, who dove in to save a 93 year old man from drowning, was overlooked because we care more about the Biebers and Lohans of the world.

Malala Yousafzai is the youngest person, at 16, to be nominated for a Nobel Peace Prize. Her courageous BBC blog about Muslim women living under strict Muslim rule gained her recognition. In 2012, she walked onto a bus that was soon after boarded by a gunman, who was sent for her, who shot her three times in her neck and head. Her incredible ability to use this as platform for her goals to change education in her country is inspiring and should be commended by all, and also get her that Nobel Peace Prize. Yet, most young people have no idea who this girl is, and don’t seem to care the impact it has on our world. Making strides in a direction of change, is courageous and dangerous, and seeing a 16 year old taking these steps is groundbreaking.

Having faith in the younger generations of today is dwindling for many, with the emphasis placed on celebrities, and ‘reality-stars’, the only hope young people have is outside of their gossip sites and celebrity social media. It is crucial that we stress to younger people the importance of kindness, and helping others. Or else we’re bound to end up with a lot of Justin Biebers and Lindsay Lohans running around, and I do not think I could stomach any of that. I’ve heard of the petition to kick Justin Bieber out of the country, while I find it hilarious, the answer does not lie in kicking him out, it lies within Americans who overexpose and allow this type of behavior to continue for the sake of our entertainment. Get the kid some help, or stop looking to him to show our younger generations how to behave.