Did Marius Have to Die? 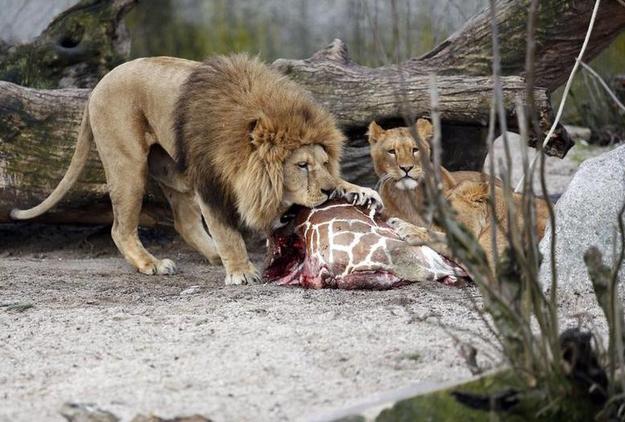 “We were open about it because we know the euthanasia was the right thing to do, if we’re serious about science, we can’t be led by emotion,” said by Bengt Holst, Copenhagen zoo’z scientific director.

I can’t even pretend I know the scientific reasoning behind capturing and breeding animals in zoos, and I will not bother to try. I do not wish to advocate the boycotting of zoos for the simple fact that it’s impossible to get anyone to rally behind that. The knowledge received, and the excitement of seeing a rare animal in person is a splendid gift that zookeepers, and scientists have given us. But the treatment of these animals is absolutely appalling and needs to change immediately.

After viewing the documentary Blackfish, and realizing how inhumane it is to keep such majestic and large animals in swimming pools for our own selfish pleasure, and discovering the terrible loss of a giraffe named Marius, who was publicly slain for ‘scientific purposes’, it is humans who should be ashamed of our disgraceful treatment of animals.

As I said before, I do not want to push inhumane circumstances on anyone, but these issues should not be ignored. In the Copenhagen zoo in Denmark, it is apparently custom to kill an innocent animal because its genes are too similar to other giraffes in the park. Natural selection at its finest. A staff veterinarian anesthetized the animal, before shooting it in the head with a bolt-action rifle. Not to mention this was televised and was also surrounded by dozens of spectators, including children. The giraffe’s body was skinned and carved up for tiger and lion meat.

According to Holst, in an interview with Time magazine, “I know the giraffe is a nice looking animal, but I don’t think there would have been such an outrage if it had been an antelope, and I don’t think anyone would have lifted an eyebrow if it was a pig,” he said.

Did Marius need to die? That is the main question needing to be asked to these scientific masters of the universe. According to Holst, Marius was part of an international breeding program whose bylaws prohibit inbreeding in an effort to maintain the health of the stock. The zoo said they, ‘had no choice’, but many gave them choices. Animal lovers everywhere, since the day the zoo made its plan known, by the thousands signed petitions demanding the zoo take other action concerning the baby giraffe. Holst received death threats, animal rights groups called for the boycott of the zoo, and two other zoos offered to take Marius. As with a trend with all zoos though, it seems the guarantee of saving one giraffe meant losing another, or selling the animal to multiple places.

It is my hope that people will see Marius’ story and take action against the inhumane nature of zoos. The need to breed and procreate. These beautiful creatures should not be for our entertainment, it should be for the preservation of a species that is hauntingly fascinating and should be studied from a far. Not in a lab, or scientifically engineered breeding ground, where scientists are scaring the hell out of these poor creatures.

The alternate to visiting a zoo is always a Safari trip, which seems a lot more enticing than going to stare at wild animals in captivity. The state of endangered animals is a real problem that should be addressed, and yet we seem to want to keep these creatures under lock and key until we figure out everything there is to know about them. It’s time to stop mistreating animals in the name of science, and learn to live peacefully on this earth with them. Otherwise, were going to start seeing a lot more situations such as the Marius one. We need less Bengt Holst’s in this world, and more people who are willing to stand up to them in the name of those who do not have a voice.