Waiting for It to Get Better

Jillian gives a little look into her mental state the past few months, and how things are going. 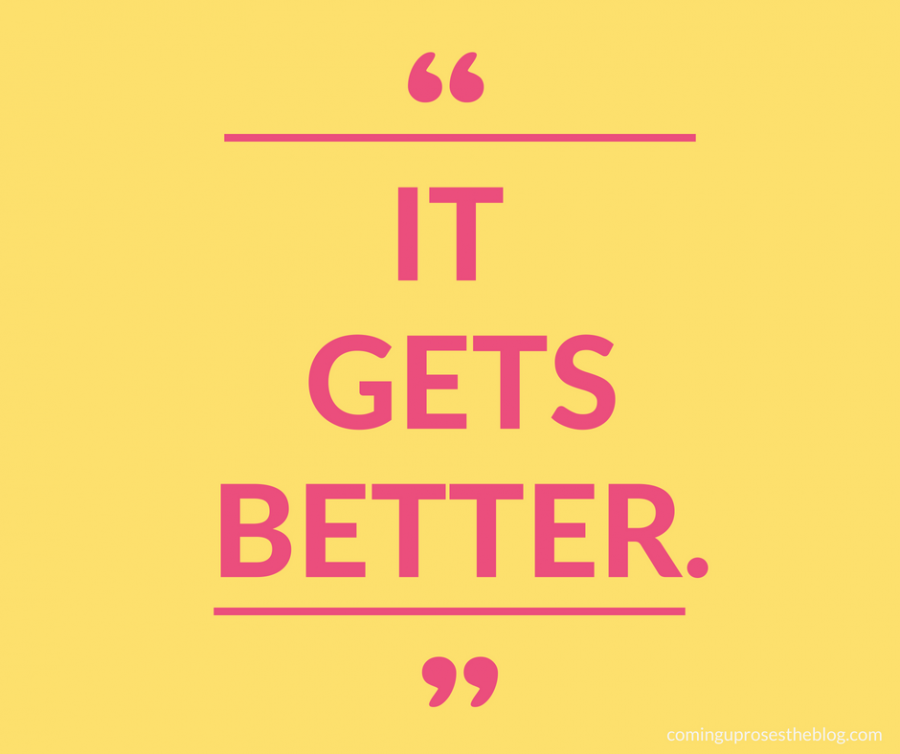 My entire college career has been smooth sailing, more or less. I’ve never struggled with classes or my grades, proudly keeping up a 3.4 GPA (which could be several points higher if it weren’t for the C that I unfairly got from my Art History professor, who made his test final unreasonably hard).

This semester is different. It’s the first semester of my junior year, and let me tell you, I am struggling hard this semester. I don’t know what it is. I’m behind by weeks in most of my classes, something I am not proud to admit. I mean, really, who gets that far behind in classes they’re paying for?

I’ve lost my drive. I don’t really know where it went, but it’s not with me. Nothing has really changed between this year and last year. I still talk to all the same people and even some new people that I’m beyond thankful for. I work the same amount of hours, I have the same amount of classes and classwork to do; I have even less practice time for the cheer team than I had before. But something’s different. I feel different.

Am I depressed? I didn’t think so.

I’ve been depressed before, and it lasted for years, but that was different. I was sad, I lost many people and it hurt, it hurt for years. I knew I was depressed, and I knew that I wasn’t doing well. But I also knew I wanted to get better. I was self-aware enough that I needed to see somebody for help, and I told my mom I wanted to go to therapy. I went to two different therapists in two years. One who I loved, who helped me so much and the other one who helped… sort of, but was a little less helpful and more so would just talk crap about the people I’d tell her about. The bad-mouthing felt good but I don’t think it helped me in the long run.

I was talking to my brother on Thanksgiving, and I told him there’s nothing that interests me or catches my attention anymore and he said without skipping a beat, “Yeah, that’s called depression,” and maybe he’s right.

Last year was probably the only year since I was 12 that I wasn’t depressed. I don’t mean to say I was sad like people do when they are throwing around a mental illness that affects so many people as a simple adjective. I was to where I didn’t care if I was alive or not, the only thing keeping me together thought that my family wouldn’t be able to handle it. My grades didn’t matter to me, my relationships didn’t matter to me, nothing did, really. I was hanging on by a thread, and I felt like nobody realized which only ever made things worse.

The thought nobody knew how I was feeling made me resent them. I was mad at my family for not knowing how much I was hurting, and I was mad at my friends for not knowing. I was angry with the people who knew and who did nothing to help me or about it, even though I’d swear to them it was okay. I was hurting and nobody did anything, and I think I was angry about that for a really long time and never realized it. I didn’t realize how harmful it was that nobody cared, or seemed to care, at least. But thinking back on it, I think I carried that with me for a long time. I resented the people who did nothing to help me, and it made me think those people didn’t genuinely care about me.

It took me a long time to realize that people are not mind readers, and just because someone doesn’t know you’re hurting doesn’t mean that they don’t care. It took me realizing that sometimes you don’t even realize yourself that you’re hurting.

I don’t think I processed what I was feeling until my brother pointed it out to me. It was classic signs, lack of interest in things, sleeping all the time, I don’t care about anything. I don’t want to feel this way either, so maybe that’s why I’m trying to act like I don’t. My self-care routine at this point is sleeping more because I feel like that’s the only thing there is to do anymore, even when I have a plethora of things to be doing. I don’t have any drive to do anything.

I know I’m not nearly as bad as I have been in the past, but I still don’t feel good.

I got a couple of weeks behind in classwork for one of my online classes, so I reached out to my professor to tell her I haven’t been doing the best mentally, and she reported me to the counseling center at Mercy, which was a nice thought but made everything so much worse. Talking to someone about what was wrong felt wrong with me because nothing should be wrong. Everything is good and nothing has changed from last year when I was at my best, yet everything feels different.

Some days are better than other days, and some days I want to do more than I do on other days. But some days are terrible. I sleep all day and when I finally wake up, all I can think about is all the stuff that I need to get done, which only stresses me out more and leads me to… Well, going right back to sleep to avoid that stress and responsibilities. I feel like that’s all I do anymore, sleep, stress and then sleep.

After college has been so easy for the past two years, I feel so much pressure to continue to do and I always have. It’s piling up on me, and perhaps that’s my issue right now.

Maybe I need the month-long winter break that’s coming up, so I can reset myself and get back to feeling normal. I’ll keep telling myself that the break will help, and I hope it does.

I’m painfully aware of me not feeling good and I feel like there’s nothing I can do about it. Even when people ask what’s wrong or what they can do, I don’t know what to say. There should be nothing wrong and it feels like everything is somehow.

All I know is that I want to feel better. I know what it’s like to feel better and to escape this hopelessness, and I can’t wait to get back to that, because I know it always gets better.