The Realities of Having a Tattoo Artist for a Brother 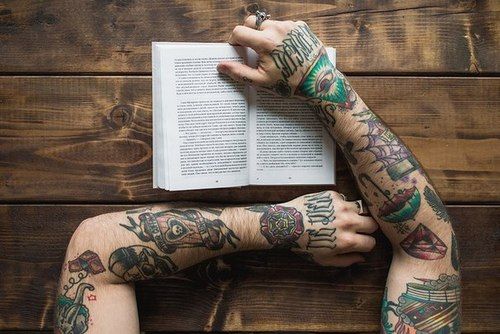 I love tattoos. I think they are magical pieces of artwork that we get to carry around with us at all times. They are reminders of power, uniqueness, and just plain fun. In recent years, tattoos have become more main stream than ever before increasing their demand and therefore the demand for artists. My brother jumped onto the tattoo bandwagon in the early 2000’s. Being so young at that time, I had no idea what that entailed. If I had known then what I know now I don’t think I would have ever thought that the job was glamorous.

Growing up, my brother was never there for the important things. He wasn’t there for the holidays, the birthdays, the big life changing events. The excuse was always the same. Work. It didn’t matter what time of year it was or even what day it was. He was always at work. See his work never ended and the seemingly worst days to get tattooed (holidays) were often the best days. Those were the days when clients almost always are off from work and can finally come in to get that little bird they always wanted or finish up that full sleeve. Those are the days that they give bigger tips because clients see that the artist isn’t with their family either.

Even when he was away from work he never really was away from it. His phone would constantly be going off. There would maybe be fifteen minutes maximum before another client would ask him when he was free to do a tattoo. Business always seemed like it was booming but something would always go wrong. Maybe a client didn’t show up. This would change the whole expectation of the day. That one guy who didn’t come in just cost my brother lunch and the $300 that just walked in that he had to turn away just in case his appointment actually was just running late.

Money was always tight and that was always very apparent. It wasn’t because my brother is a shitty artist. He’s tattooed some pretty well known people like John Mayer. Not having enough money had nothing to do with his skill set. Its always been about where the shop is or being at the right place at the right time. Money was and still is a huge factor in just being able to have some kind of relationship with my brother. For years he wasn’t able to come visit because of the expenses just to see my family. Every time he did manage to visit he either just worried about all the appointment he had to turn away or only came to visit because he needed money. This made our relationship nonexistent at points in time. There have not only been months when we didn’t talk about years, especially when I was too young to travel alone. After over 10 years of learning about how unpredictable his job is I’ve almost come to terms with how much the cons out weigh the pros.

The pros are very apparent. I love telling people that my brother is a tattoo artist. I’m also proud of him for it because it is a job that he has something to show for almost every minute of every day whether it’s a new outline that he’s drawn up or the physical tattoo on someone’s body. It’s rewarding. Most people just think of my brother as someone who will maybe give them their own tattoo cheaper than somewhere else, but that’s never the case. The most that I’ve been able to get out of the situation is two birthday present tattoos but that in itself was an obstacle. Days worth of travel were spent so I could sit through hours of pain, all in the name of sibling bonding. I’d still go to him even if I had to pay for the next tattoo. Just hanging out with him would make it worth it.