nobody realizes the importance of keeping a secret! 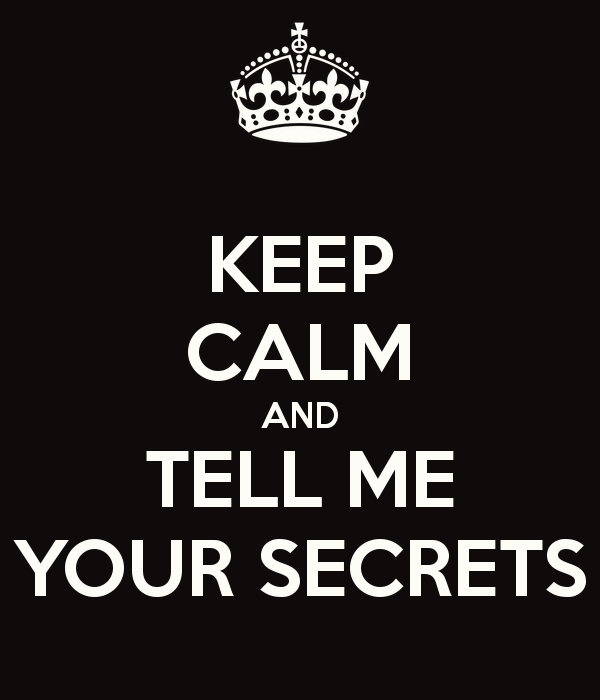 The definition of the word secret is to keep hidden from others: known to only a few people.  If you truly understand this definition then by now you must have realized that everyone has secrets!

Just think about it, some of the best conversations you’ve ever shared with your friends have usually started with the lines “can you keep a secret?”, or “if you tell anybody this I’ll kill you” or at least something to that effect.  But how many of us really actually know how to keep a secret? The temptation to tell somebody, anybody, depending on the urgency level of the secret, can be a real struggle to deal with.  Plus let’s face it, we never actually keep it to ourselves.

What we need to realize is that the person who is telling you their secret probably has an overwhelming amount of trust in you.  In today’s society trust is the foundation of any   stable relationship you make, whether it be at work, with the opposite sex, or even with your family at home.  By telling someones secret you are ruining the opportunity to maintain a stable relationship with that person. Also being known as an untrustworthy person is never good for anyones reputation. I have personally myself witnessed tons of relationships/friendships that have been terminated people cannot keep their mouths shut.

But why cant we just keep the shit to ourselves?

Last July David Eagleman wrote an article for bigthink.com that may have an answer to why we cannot keep a secret.  In the article Eagleman discusses the brain and the effect of what knowing a secret has on it.  In a quote from Eagleman’s article he writes “understand what a secret is, which is that a part of your brain wants to tell something and another part of your brain doesn’t want to because of the social consequences of it. That’s what’s required for a secret.”  In the article Eagleman goes on to speak about the stress levels of people who hold secrets and how their hormone levels go up, but as soon as they tell someone the secret their health improves tremendously.

I don’t believe that.

I think keeping a secret has everything to do with how you were raised and the type of person you have become.  I was raised to know the importance of a secret.  Because of that many of my friends feel more than confident in telling me their problems.  The fact that I am a trustworthy person has helped me bond and create relationships with people that I will have for a lifetime.  I feel like people who tell other peoples secrets are usually the ones who also spread rumors and lies as well.  Some people nowadays even use the secrets they know about a person as power.

But what about the bigmouths who can’t keep a secret?

There are some instances where telling a secret was the right thing to do.  Take for instance Mark Felt.  He is the one who leaked the information to the Washington Post about the Watergate scandal, which led the Nixon’s resignation.  Felt went under the name anonymous for 30 years, until he finally revealed himself in 2005.

Other circumstances such as you knowing your next door neighbor is a serial killer or an axe murderer my also tempt you to tell, which would be totally acceptable, but in most cases telling someone’s secrets is not something that is socially acceptable.  The phrases “snitch” and “rat” will forever be associated with people who told secrets they knew about something or someone.  Don’t get me wrong, every secret isn’t as devastating as Watergate, or as serious as telling the cops on your friend that committed a crime, but revealing someones secret or a secret about something can prove to have there own consequences.

We are currently living in a society where the only media that gets praised is gossip.  Revealing the rich and the famous’s deepest secrets are now used for the average person’s entertainment.  Im not talking about investigative journalism either because half of the things we hear about stars are usually fabricated by a public relations person.

America has become a place where exposing a persons secrets can become a lucrative job.  I believe that this is a big reason why nobody can keep a secret anymore.  The social acceptance of airing out someones dirty laundry has become so popular its hard to trust anybody.

Be careful the next time someone says “ don’t worry, your secret is safe with me”.