Too Smart for Your Own Good 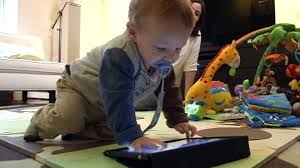 In 2007, a show named “Are You Smarter Than a Fifth Grader?” aired on fox throughout homes across the nation.  The game show consisted of 2 contestants attempting to answer a slew of questions taken from elementary school textbooks, from grades 1 to 5.  Upon answering the most questions correct you could ultimately win the grand prize of $1,000,000 dollars.  Throughout the shows 3 year existence only 2 people ever won the grand prize.  Whether this show proved if adults were smarter than fifth graders or not I really couldn’t tell you.  The reason I thought about this particular show was the fact that I walked into the Apple store the other day, and what I happen to witness was quite amazing to me.

A group of 6 children, no older than 5 years old were all gathered at a table.  They really didn’t notice me staring at them in astonishment because they were all too busy playing games on their ipads.  The one thing that shocked me the most was that these group of children knew how to navigate and control the ipad better than I did! That made me think about when I was a child and how I never had anything close to an ipad to finagle with.  It was coloring books and Lego’s for me growing up, now children are presented with many different types of hi-tech gadgets and smart devices and are able to understand them and use them nearly to their full potential.  I remember my mother buying our first computer off the Home Shopping Network.  It was called a Tandy 1000 and me and my brother didn’t even know how to use that shit.  It was amazing to us.

Then I thought to myself maybe these children growing up now are smarter than we were growing up back then, but then me being the sore loser I am thought of something else.  These kids are cheaters!

What happened to the days of actually having to read a book with a cover and actual pages.  Or rushing home to catch your favorite show.  You know the show that if you miss it you might never get to see the episode again.  Or what about your parents helping you with your math homework and they pull out that huge solar powered calculator.  Nowadays these kids have all that plus more right in the palm of their hands, or should I say the tips of their fingers.  Children can read their favorite books, watch their favorite shows and even get help with their school work, all in one device. That’s pretty impressive, but does knowing how to use an ipad or any other smart device at such a young age necessarily make you smarter?

According to an article written last April for ABCNEWS.com titled “Toddlers Obsessed with iPads: Could It Hurt Their Development?” a group of child development experts from Barnard College’s renowned Center for Toddler Development did a study where they were observing several young kids and monitoring their reactions to traditional toys versus an iPad, taking note of how the kids reacted after the iPad was taken away.  What the study revealed was that toddlers were much more active when the ipads were taken away, but while using the ipads the toddlers were very much distracted, some not even answering when their names were called.  Also the study discovered that a toddlers imagination needs to be exercised like a muscle in order for creativity to be developed.  Researchers also discovered that excessive time in front of an ipad can cause behavioral problems down the road.

It’s obvious that technology isn’t slowing down either. 2 years ago, San Francisco-based nonprofit organization named Common Sense Media surveyed families with children 8 and under, and found out just 8 percent owned tablets like ipads. That number has now jumped to 40 percent. And the percent of children with access to some sort of smart device or tablet has jumped from half of those surveyed to 75 percent.  You have to believe that as technology advances, these numbers will increase more, maybe till everyone owns a ipad or tablet!

In this generation, where they rely on technological advancements to make humans do less and machines do more, when dealing with children I feel like parents should regulate the time spent in front of any smart device.  In  no way am I saying deprive your child of playing with an ipad or any other smart device, but just be mindful of how much time your child spends in front of his or her device, because you do not want your child being dependent on it.