Shoveling For The First Time 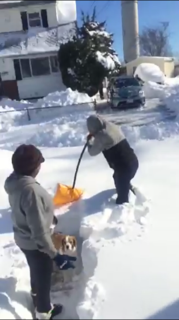 Sunday morning I woke up to the aftermath of the second biggest blizzard in New York . Blizzard Jonas took me by surprise, I looked out the window and there was snow everywhere. I spent the night over my friend Jinea’s house in Elmont Long Island. There was 26.8 inches of snow outside and her car was buried beneath it . She told me if I wanted to go home I was going to have to help her mother and her shovel her car out of the snow.

This was going to be my first time shoveling snow. I was excited because it never snows in Southern California. But I was also a bit hesitant to shovel because I saw on the news a family in Long Island had died from shoveling snow that morning.

As I opened the door to walk outside my friend’s mother Miss Lisa shouted, “no don’t open the door”. But by that time I’m afraid it was too late. I opened the door and the snow came into to the house quickly, I did not have time to shut the door.

She was not that mad I let a good amount of snow into her house. I did not know what to do so I just started to throw the snow out with my hands because I did not want it to melt in the house.

When I finally went outside, the snow was up to my thighs. Every time I took a step my boot would sink into the snow. I glanced down the street to see the neighbors shoveling their driveways.

As I walked further into the street struggling step by step to walk through the snow, I noticed that the snowplow did not plow the street. But he plowed the other streets because they were not dead ends. We were on a cul de sac and we were trapped with no way to leave.

We wanted to walk to the store but it was freezing outside I could not imagine walking anywhere.

I was determined to get home because my cat Samantha was by herself I started shoveling the porch with Miss Lisa. We shoved the porch and walkway quickly, which took about 20 minutes. Jinea finally came out the house, she was in hiding because she did not want to shovel her own driveway.

After an hour of shoveling my forearm began to hurt, my toes were ice cold because I did not have on the proper boots on. My nose was running and snot was dripping out of my nose. I put tissue up my nose to stop it. I knew then I had to take a break.

I went into the house and Miss Lisa was so kind to make me sunny side up eggs, toast and sausage.

After I ate breakfast, I went back outside to shovel, but I was tired because after I ate I had the itis.

I started to play James Brown off of my phone to motivate me to shovel.

Miss Lisa looked over at me and smiled because she could not believe that I was playing James Brown. We sang along to James Brown as we shoveled the large amounts of snow.

Jinea’s car had so much snow on top of it. I knew it was going to difficult to shovel her car out. I shoveled the front tires out first because she has front wheel drive. I asked Jeff the neighbor for some salt to put underneath her tires to break up the ice.

Jinea let her dog lucky out the house to go to the bathroom.

Out of all the places for him to use the bathroom he decides to go right where I am shoveling.

But for some odd reason his pee was breaking up the ice where he used the bathroom. Its bad enough he was peeing where two feet from where I was standing he starts to poop.

When he finished I put snow over his poop because I could not bear to smell or see his poop.

Jinea came outside to help me finish shoveling her car out but I was all most done.

After her car was shoveled out of the snow, and it’s about 5pm, and the snowplow still has not plowed the street.

The neighbors are in an uproar. They have been calling all day for the snowplow to come and it has not come.

They are so frustrated, that they go to the beginning of the street to start shoveling. It started off as four of the neighbors shoveling to ten of them.

This was very interesting. I stood on the side and observed as they had such a difficult time shoveling their street.

This was my first time shoveling but I knew they were not going to be able to shovel the thigh high snow. They attempted to shovel for 30 minutes and gave up. As they were getting to the bottom of the street where there was ice. It was so thick, that they could not shovel anymore.

My toes were frozen from shoveling for four hours. It was time for me to call it a day.

I walked into the house to take a nap. An hour into my nap, I heard to snowplow coming.

The whole street came outside to watch him plow.

After being trapped for a day and being cooped up in the house everyone was eager to leave their homes.

That night I went home to see that Samantha was fine.

With relief, I made myself some hot chocolate and went to bed.

My first time shoveling was fun but I know I don’t want to do it again. Thank heavens for sunny, California winters. 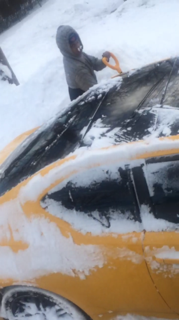