They Were Out To Get Me 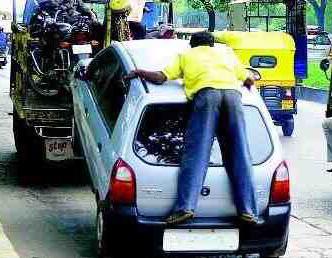 Nothing is worse than going outside to get into your car and coming to realize your car has been towed.

It’s a devastating feeling. I was so upset but I could not even cry. I literally had no emotion to my car being towed for the second time in six months.

I started walking in the direction of the court. It’s a 20-minute walk from my house but it felt more like two hours because I was walking like a snail.

I just felt so sad this happened to me again.

Ever since I moved to Yonkers, the parking enforcement has been out to get me. They search for my car from 9 a.m. to 6 p.m. at night.

They target my car because it has a California license plate. They know giving me excessive tickets will make their lives a little easier to reach their quota.

I have spent over 2,000 dollars paying for parking tickets and getting my car out of the pound. All that money thrown away because the parking enforcement are vultures.

I keep getting tickets because I have a California license plate and to the Yonkers parking enforcement, I have an improper registration. But my registration is valid, it’s just not a car registered in New York.

I would have switch my license plate to a New York one but that’s going to cost a bunch of money. Then, I’ll have to change my insurance to New York insurance and that’s more expensive than California insurance. Also, I would have to surrender my California license. That’s a long and complicated process I do not want to go through because I’m not sure if I am going to live in New York after graduation.

Prior to moving to Yonkers, I lived in Sleepy Hollow, New York and I never received a parking ticket while living there. The police never pulled me over for having a California license plate. I was not harassed and preyed upon. When I go to the city, I never receive parking tickets for having a California license plate. It’s not an issue anywhere I go but the city I so happen to live in.

I finally arrive to the Yonkers courthouse.

The clerk takes her time looking at documents while sitting at her desk. She has no sense of urgency to speed up this awful process.

There are three people in front of me before I can see the clerk. After waiting 30 minutes, I am finally being helped.

I take my license out of wallet and I slide through the bullet proof glass window.

She comes back with a piece of paper with all of my tickets.

When I saw how much I owed, I could have broken down in tears like the last time my car was towed but I stayed composed. Crying my eyes out was not going to help this situation.

Every ticket says “improper registration displayed” or it says” no front license plate.”

I do not get tickets because I double-parked or parked somewhere I was not suppose to.

Looking at the paper thoroughly, all of my tickets were for stupid reasons.

I asked the clerk “Can I see the judge?”

She said “No you can not see the judge, you saw him two weeks ago.”

I said, “I know that I was trying to resolve this ticket situation before my car got towed and nothing was resolved.”

I said “No, I would rather try to resolve this one more time before I pay all of this money”.

I added “ How do you expect me to pay this money I am a college student who just started a new job 1 week ago”.

Feeling very frustrated and wanting to just go bananas I simply asked her,”Can you give the number to the towing company that has my car?”

She gave me the number and I called the tow company immediately.

I really wished there was a tree that grew money because I really needed it.

I walked up the hill to my apartment after a hellish day. I could not do anything but pace back and forth in my apartment trying to figure out where am I going to get this money from.

I just so happened to remember that I was supposed to receive a refund check from financial aid this semester.

I called my Nana and asked her to check the mail to see if there was a check for me.

The stress melted away and I sat down to process the blessing I just received.

But just when I thought things were going to get better, there’s always a catch to something.

My Nana put the check into my account but it will not be available until Friday and today is Monday.

But the bank does allow a small portion of the check to be released into my account everyday leading up to Friday.

On Wednesday morning, I started my journey to the courthouse to see the judge in hopes that he will reduce the $1,140 I had to pay in tickets. 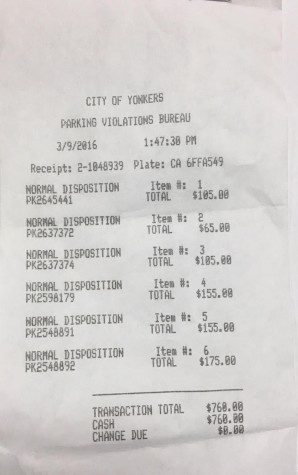 Once again I am waiting in line to see the clerk.

A couple of people in line were sharing their stories of how their cars were towed.

I paid $760 to see the judge. I was praying he was a different judge from two weeks ago. Judge “Patch Eye” was so mean  and I knew he would not help me.

As they opened the doors to let everyone in for their hearings, I was trying to see which judge was in the court.

Thank God its not Judge “Patch Eye.” It’s a short judge today so I felt lucky.

An hour and a half went by and finally he calls my name.

I explain to the judge I am a college student who just started working.I went in depth about my situation  and being from out of state. By the way the judge was looking at me, I did not think he was going to help me.

I said “Thank you your honor.”

I rushed to the clerk’s window because I knew she was trying to leave for lunch.

When I got to the window, I looked at the paper the judge gave me and it said I must pay $200.

The guy who went after me said the judge reduced his tickets from years ago down to $100 and my tickets were only weeks apart.

I had to wait another hour just to see him. I felt that I was at the DMV rather than court.

I knew there had to be an error. When I saw the judge again I told him there must be a mistake because you said $100 but this paper says $200. 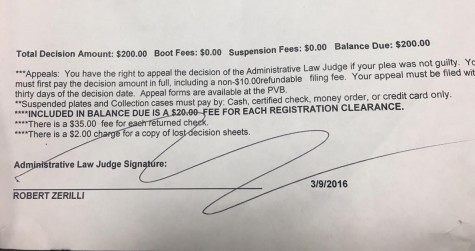 He said, ” There’s not a mistake that’s what you have to pay because its on the paper”

Feeling irritable, I rushed to the clerks window again. I handed the clerk $200.

She counted it and said your missing $2.

“I asked her could I just pay the $2 later, by the time I go home to get $2 you guys will be closed and my car will be more expensive to get out of the pound.

She said” I’m sorry I can’t help you. You can come back tomorrow.”

After all that I have dealt with in this dreadful situation, I was just hoping I could catch a break. Just a small break but that was not happening.

I left the courthouse and started my long journey up the hills of Yonkers to my apartment.

Today is Thursday it’s a new day let me rejoice and hope that I am able to get my car today.

I called my brother and asked him to send me $47 because that’s how much more I needed to get my car out of the pound.

I had to be at school today at 2:50 for class and time is precious.

Instead of walking today, I decided to ride my razor scooter my 10-year-old brother gave me.

As I ride my scooter through the raggedy cracked streets of Yonkers, I’m attracting the stares of adults.

They are looking at me like I’m a crazy for riding a scooter.

I get to the courthouse in 10 minute’s.

Of course there’s a line and it takes 30 minutes for the clerk to see me she still moving like molasses. I paid the $200 to the clerk. 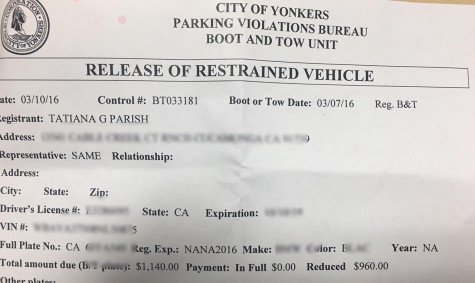 She says “Have a nice day see you later.”

I laughed and said I pray I will never have come in this building another day in my life.

In a hurry I left the court and got on my scooter and road down to the bank.

My brother was taking forever to send me the money I needed.

I asked the teller could she release $47 of my check that was pending in my account. I told her my car was towed but she still would not help me.

I only asked because the bank has given me money from my check they have held in the past.

A woman who was at the teller next to me overheard my story. As I was leaving the teller she said “I know exactly how you feel they towed my cars, I’ve been taking cabs ever since”.

Normally I would not take money from strangers or anyone but I knew I was desperate and needed they money.

I told her “Thank you so much I really appreciate it.”

I insisted on paying her back so I wrote down her information and told her I was going to pay her back tomorrow.

Feeling that I had finally caught a break. Its good to know that there are giving people in the world.

I would take me 30 minutes to get to the pound. On my way there I see this long hill on north Broadway.

My GPS said it’s a quarter of a mile walk up the hill.

I’m an athlete but I knew that walk was going to figuratively kill me in 76-degree weather. So I decided to take a short cut through the hood.

As I’m riding my scooter on Locust Hill Ave I see a couple of women strung out on drugs begging the neighbors for money.

I keep riding until I get to the end of the street and I’m on Ashburton Ave. It’s a huge hill going downward.

I was soaring down the hill, within 10 minutes I’m on the Saw Mill river road.

Only 5 minutes away from getting my baby back.

I paid the tow company $517 for my car. The nightmare was finally over. As I’m walking out the office a tow truck driver says “You know I towed your car, there weren’t even that many tickets on there.” 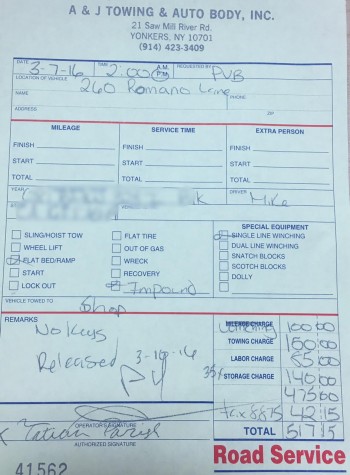 “The guy who booted you told me but he said since he gave me these last two tickets that’s why I had to take your car”.

“Don’t think you’re the only one who gets your car towed, my car was towed and I’m the one who usually tows peoples cars. Trust me they tow the policemen and fire fighters cars no one is sparred”.

I got my baby back and I rolled the sunroof down and turned my music all they way up.

The weather is fantastic and I feel so happy I can enjoy the rest of my day.