Are you a Jerk? Let’s find out! 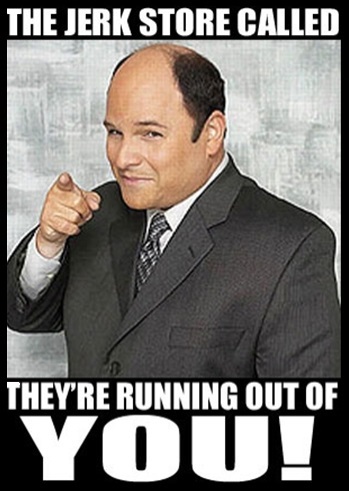 Have you ever thought of yourself as an inconsiderate, thoughtless person? There’s nothing wrong with admitting it, some people go through life thinking they’re a gift to the world.

We deal with a bunch of inconsiderate a-holes in our lifetime. There are those who only think about themselves, those who constantly whine about themselves, and then there are people who walk obliviously through life without knowing their arrogant habits.

I’m sure you can recall plenty of times where someone who was blatantly rude to you or someone else. If you can’t, then you’re probably the person I’m talking about. So, here are a list of things that can define someone as a jerk. Just know that this for your own good.

1. Do you hold the door open for people? – Do you at least look behind you to see if someone needs the door held open for them? Please, don’t make the conscious decision of not holding a door open for someone if they really need it. Even if they really don’t need it, it’s a very nice gesture that someone will be grateful for. It’s the thought that counts.

And, the consideration doesn’t stop at the door-holding end. If you notice someone holding open the door for you, and you’re close enough to accept that kind gesture, you better walk through that damn door.

2. Do you chew with your mouth open? – This is the ultimate pet peeve. I didn’t know some people needed a handbook on how to chew their food. I guarantee you it takes more effort to chew your food with your mouth open then it does when it’s closed. So, stop it. Stop it now!

3. Do you cut the line? – Seriously, what’s your problem? Did you not see there was a line forming in front of you? You’re not special. Nobody likes waiting in line, so what makes you think that it’s okay for you to not wait, just like everybody else? Maybe you were a little confused by the language. The “beginning” of the line is at the end. Don’t worry, you’ll get the hang of it (hopefully).

4. Do you blast your music in public? – I promise you, NO ONE wants to listen to your music blasted by the tiny speakers in your phone. Or through your enormous $300 Beats by Dre headphones. Just because you don’t care that you’re destroying your ear drums through your obnoxiously, loud music, doesn’t mean we have to witness it.

5. Do you use your speaker phone in public? – Just because Kim and the rest of the Kardashian’s do it, doesn’t mean you should. They do it because people watching their show actually care who is talking to them on the other end of that phone call. The rest of us don’t want to hear your personal business.

6. Do you knock before entering a bathroom? – I’m talking about a one person bathroom. Do you knock, or do you try to break down the door because your bladder has taken control of your brain? I get it, you have to pee. Do you know who else has to pee? The person currently peeing who would probably be mortified if you found them in a compromising position. So please remember to knock!

7. Do you use your turning signal when driving? – It’s really simple to do. Plus, people will genuinely appreciate it. Even if you’re weaving through traffic like the jerk that you are, everyone cursing at you as you zoom by them will probably say “At least they had their turning signal on.” You may think that you’re a great driver and know what you’re doing, but the rest of us don’t. So, you can either telepathically communicate your lane change to us or use your turning signal. The choice is yours.

8. Are you a bad tipper? – If you received bad service, then it’s completely okay to tip your server less. Leaving no tip at all should only be under rare circumstances, and if the service was that bad, you should really speak to a manager. If you’re the kind of person who believes it is okay to leave little or no tip every time you go out, then you’re the problem.

A server shouldn’t be punished for the things they can’t control. Aw, poor you, is it super busy on a Friday night? Did somebody accidentally spill water on you and then gave you a free refill out of an act of kindness? Get over yourself and give that server a decent tip.

9.Are you always late? – We’ve all been late for something. But, being late all the time will eventually get someone really angry. Some people will take it personally if you’re late, even if it’s not your fault. People won’t like it though if they’re constantly waiting on you. It all comes down to your word. If you say that you will be at a certain place at a certain time, then you better be there.

10. Do you pull out your phone for everything? – This trend is growing. When something happens right in front of you, instead of helping them, you decide to record it so you can put it on your stupid Vine account. Instead of taking “selfies” or making Vine videos for the rest of the world to see, try interacting with people without your phone.

These everyday behaviors that you should consider not to be rewarded for, but because being considerate for others is just the right thing to do. Hopefully, these tips will make you a better person. Now, go learn how to chew with your mouth closed.