What Would Saint Patrick Do? 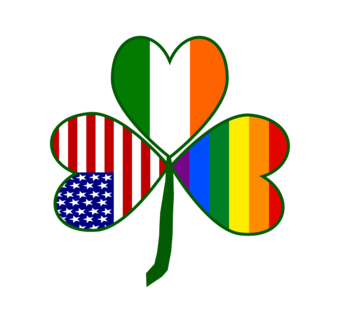 St. Patrick’s Day, March 17, 2014. The Irish have marched up 5th Avenue in New York City for more than 250 years. To be exact, this year will be the 253rd time. It is a celebration of the Irish coming to and flourishing in America and a point of pride, an invitation for everyone to be Irish on St. Patrick’s Day and march with your respective county or organization. An invitation to everyone but the gays.

This year Mayor Bill De Blasio will be boycotting the parade because of the ban on gay rights groups being allowed to march. Boston Mayor Martin Walsh had threatened to follow suit for the advocacy of a group of gay veterans that were not allowed to participate up until this past Saturday.

Those who run the NYC St. Patrick’s Day parade do not want any distractions from the very traditional pomp and circumstance they’ve become so proud of.

Who is in charge of the parade? That would be a committee of established persons in the Irish community throughout the city and the Archdiocese of New York. Cardinal Timothy Dolan to be precise.

Banners for each county and organizations such as the Ancient Order of Hibernians and high schools are held high with esteem and when the FDNY walks by, the crowds bellow their overwhelming thanks and support. Every group from the NYPD Pipes & Drums to the Irish step dancers march and dance their way up 5th Avenue to boast their pride of their Irish culture and all are received with a resounding cheers. Yes tradition is a great thing indeed, when there is common sense involved.

Wars have been waged over conflicts in religious beliefs since religion was a thing. Interpretations of sacred passages written by four dudes who were probably the only ones who could write at the time are misconstrued by everyone and anyone who is pious enough to consider themselves a viable source.

Catholicism in itself is a term usually associated with historical beliefs in theology and doctrine and while Pope Francis may have a more lenient attitude on the issue, other church leaders are quite adamant to keep gays out of the parade.

One may wonder, why? Why should any influence be had over a parade of all things by an institution that covered up the sexual abuse of minors for decades?

These wars stretch beyond the differences between any two faiths and there are many examples of how a line needs to be drawn on the church’s influence over state matters. A tale as old as time, the separation of church and state has had varying boundaries throughout history, homosexuality being an argument for the ages.

Let us take a step back and consider the church’s history and how deep it’s leaders were in the hole of corruption for centuries along with how the Irish themselves were treated when they first came to this country. It seems just the teensiest bit ignorant to not allow gay rights groups to march with their own banner showing their pride and individuality amongst their fellow countrymen.

My parents are both from Ireland and I have marched in the parade many times. I know a fair amount of Irish folks of all ages and I get mixed emotions from all on the topic. There is a pattern of opinion with these people and it is usually based on one of two things, their intelligence and their faith. Some folks that I have spoken with who agree with the ban have led me to believe their opinion is based on plain ignorance with their arguments.

I get that tradition is important but more so is change. Faith is a valuable thing to have but more so is tolerance. The Irish left home and migrated to Ellis Island back in the day with the faith that they would make it in a new country. Bet you they were praying for a little more tolerance when all the jobs said, “No Irish need apply.”