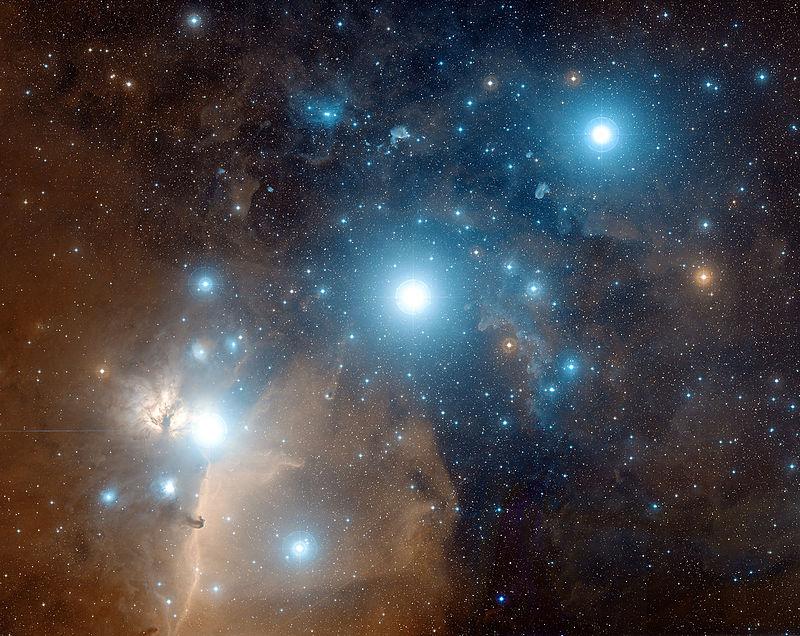 What do, Cleopatra’s Needle in Central Park, the Worth Monument Obelisk and the Emmett Obelisk in St. Paul’s Chapel all have in common? They’re obelisks in Manhattan.

An obelisk is the word for a tall monument, which tapers at the end to form a pyramid from the width of the four sides.

Contained in St Paul’s Churchyard, in Lower Manhattan, stands an obelisk for the New York State Attorney General Thomas Addis Emmet, who died in 1827. The second obelisk stands at 25th street, opposite where Broadway and 5th dissect. Besides containing a time capsule, this obelisk stands a top the body of General William Jenkins Worth, hero of the Mexican American war. The obelisk known as Cleopatra’s Needle arrived in New York’s Central Park from Egypt in 1881.

So why is this relevant?

Well, these three structures are lined up on earth, with the Orion Belt Stars. Pretty cool, right?

And what do they point to?

Only the glimmering Statue of Liberty, the feminine goddess of Venus-Isis brought over from France. What these structures point to could be the representation for the brightest star in the universe.

But back to The Orion’s Belt.

The Belt of Orion, also known as the Three Kings or Three Sisters, is a constellation or asterism that consists of the three bright stars Alnatik, Alnilam, and Mintaka.

And if you’ve ever looked up in Grand Central Terminal at the ceiling in the Main Concourse, maybe this shape is familiar to you. As you may or may know, the celestial figures are painted backwards. One of the artists, Charles Basing, has been criticized for the order being unorthodox and painting them the wrong way. Ironically, medieval manuscripts orthodoxly showed the heavens as seen from the outside looking down on Earth, as does the ceiling’s mural. 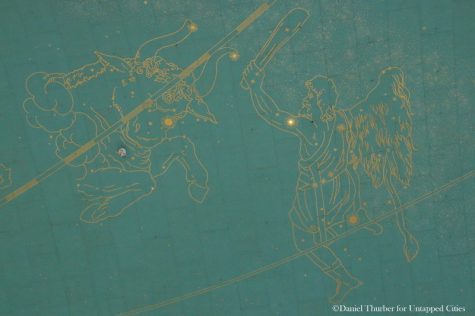 So either we’re gods, or we’re just that imperfect.

An allegory is a story, poem, or picture that can have a hidden meaning, usually one with moral or political undertones, like a parable i.e. The Lord of the Flies by William Golding or Animal Farm by George Orwell. They can have several meanings but at least one will be literal and one will be symbolic. When the Vanderbilt family was asked about it they were indifferent. Either this is an accidental happening, a purposeful act, or a creative and meaningful proceeding. Could this be a simile for human imperfection; like the center one of the Pyramids of Giza that is slightly out of order with the two, almost perfectly mocking Orion’s Belt also? By any means, this strategic placement can serve as a portal for creative thinking and excitement.

Another cool thing about Orion’s Belt is that is points to the brightest star in the nighttime sky, Sirius in the constellation Canis Major and the Greater Dog. In ancient Egypt, Sirius was referred to as the Nile Star or the Star of Isis.

In any event, this invites new ideas to the table. The view from above versus the view from below could also be the symbol. This could have been a reminder that perspective gives us our edge as humans.

The Orion constellation is one of the most prominent features of the sky. According to Egyptian mythology, the gods descended from the Belt of Orion and Sirius, the brightest star in the sky. The ancient Egyptian civilization firmly believed that Orion and Sirius came in the form of humans, Isis and Osirius, and that they started the human race.

The city of Teotihuacán is also aligned to mimic the sky. The front wall of the Pyramid of the Sun is exactly perpendicular to the point on the horizon where the sun sets on the equinoxes. Our ancestors really were superb Earth schedulers. Check out the photo below from the History Channel. 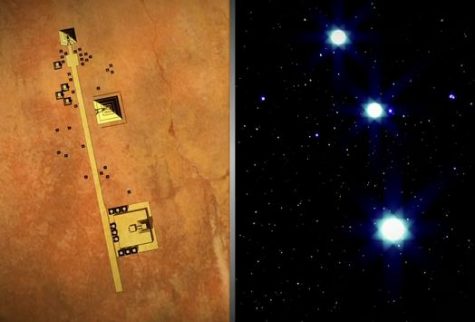 The marriage of mathematics, geometry and astrology in architecture, infrastructure and modern day life is hiding in plain sight. Maybe, if these obelisks are imperfect we are too. Orion is more than a constellation of stars in the sky, but a vehicle of communication from the first inhabitants of the Earth. There is much to learn and miracles to be observed from what has been left behind and what is right in front of our eyes for a glance up or around.