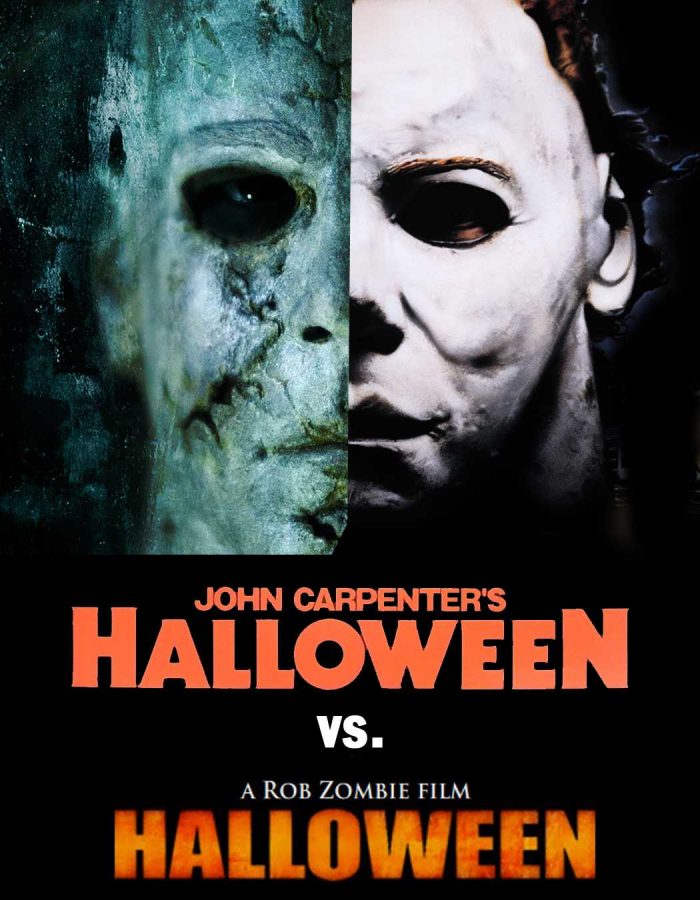 Horror films are built on the foundation of society’s fears and function by making them into a reality. Alongside this basic rule, the classic tropes of Horror come into play, as well as new contemporary tropes discovered throughout the history of the genre. Halloween (1978) created the sub-genre of Slasher films, while also becoming a classic stable within the cannon of the entire Horror catalog. Halloween (2006) on the other hand firmly sets itself as a refined horror that encapsulates everything the classic phase of the genre has to offer, as well as incorporating the contemporary tropes expected of today’s typical scary movie.

In the 1970’s there was a massive babysitter boom, and it was the target audience for Halloween (1978). Most of the tension and fears came in the form of stalking, being alone and the potential danger of the child most characters had in their care, as those are primarily the fears of anyone who is babysitting. Also, babysitters in the 70’s were mostly female, and stalking with no one around to help is a very realistic fear of a female. As such, mostly every victim killed in the film are women. What is stressed the most however is how realistic and dangerously possible the events in film are likely to occur in real life.

Even worse is having that danger come in the form of a seemingly emotionless, silent man, who is unwavering in his attempt at dismantling his victims. The original interpretation of The Shape—Michael Myers, is of a man with little to no history; a man as blank as the mask he chooses to wear. He has no explained method to his madness, and is described by his psychiatrist Dr. Loomis almost as if he’s possessed by evil. Because he is represented as an evil with no explained motivation, he is an unsympathetic killer, heightening the fear of his character. As his nickname insinuates, he is just a shape in the darkness. The darkness, along with a lengthy kitchen knife and slim build, is what Michael uses to his advantage. A stealthy, unannounced killer silently stalking in the darkness for innocent teens to slaughter all but adds to his ominous persona. As a result of the usual conventions of horror, such as teens obsessed with sex and innocence triumphing over all, Michael seems to morally represent punishment, while the teens represent sin. It is as if Michael’s goal is to snuff out all the sin that surrounds him, and when he comes across Laurie, arguably the most innocent character in the film (besides the children), Michael is defeated.

There is a scene in which Laurie is sitting in class watching Michael watch her from outside the window. Off-screen, Laurie’s teacher can be heard talking about destiny and how everyone is destined to fate. When questioned, Laurie replies that fate is like an element that isn’t contained by religion. Fate, described by the teacher, is unmovable and that it doesn’t change. This is meant to foreshadow the unspoken relationship between Laurie and Michael. It indirectly gives some weight as to why Michael wants to kill Laurie so badly, even if the reason is metaphysical.

Since this was an independent film with a limited budget, most scares relied heavily on the use of sound. From the unmistakable theme music, ominous tones used to suggest stabbings, to the sound of crickets and owls created to represent isolation; these elements all set the tone for a scene. There is also a distinct lack of gore present in the movie, which made the sound play all the more of a pertinent role.

Halloween (2006) took an entirely different direction and based its fear on a more contemporary and intimate scare. In the remake, the approach of scare was the notion that a great evil lurks among the rest of society unknowingly, and that this person could be someone very close to you. It also deals with tragedy, creating a galore of sympathetic characters, and focused on the theme of losing a loved ones. This approach is very prominent in today’s society, as there are countless incidents, like 9/11, or the Afgan War, where families have or are losing loved ones every day. As opposed to its original counterpart, Halloween (2006) has a noticeable mixture of victims, as this contemporary fear is universal and is not bound by one specific gender.

An explanation to Michael Myers and his motivations on killing are explained in this iteration of the film. Michael comes from a broken family where his step-father verbally and physically abuses him, has an older sister who belittles and shows little to no interest in him, and has an abused mother who is the local stripper for their town, a fact that gets Michael bullied constantly in school. As a result, Michael abuses animals (an early sign of a psychopath), and takes to his infant sister, revealed to be Laurie, who is the only member of his family who doesn’t cause him pain. Because of these discoveries, Michael now becomes a sympathetic killer and relates to the audience as misunderstood; a young boy who desperately wants love—torn apart by his broken home life. Even the onscreen relationship between Michael and Dr Loomis (something missing in the original), shows yet another person in Michael’s life who let him down, as Loomis was unable to help Michael surface to sanity. This is the catalyst of his eventual escape from the mental institution.

His mask, originally used to further represent the hollowness of his character, now represents a way for Michael to hide himself from the rest of the world. The world of Halloween (2006) portrays a world corrupt by sin, and this time around, Michael represents that sin along with the teens and just about every other character. Laurie still represents light and innocents as one of the only goodhearted characters in the film, but instead of attempting to kill that innocence, Michael only wants to become a part of it. He tries desperately to make his sister realize she was adopted at a young age and that they are siblings, but when she doesn’t understand and stabs him, all of Michaels hopes are diminished and he sees her as just another ugly person full of sin.

The film plays around with popular modern day Horror tropes such as “the creepy kid” trope, which encompasses Michael during the first half of the film. The film also maintains the “unmovable villain” trope as it did in the 1978’s version. Instead of lurking in the shadows to quietly take down his teenaged victims quietly, he uses extreme physical force to ravage his prey. He is also given an extremely bigger build and an almost superhuman possession of physical power. Instead of being portrayed as an entity in the night that can’t be stopped, here he is an unbreakable force that won’t stop even if one possessed the abilities to stop him. That sort of force is what this generation of Horror uses to scare its audience, as opposed to the original adaptation where evil came at a much more swift and subtle approach.

Gore and the sheer brutality of each killing is what’s mainly relied on to scare the audience. Gore and brutality, much like the Saw and Hostile films of the same decade, is a new trope used to strike fear to those watching. Realism in death is what propels modern day Horror films. The violence is supposed to feed off the sense of realism and what an actual murder may look like. Jump scares, while utilized in the original, is scarcely not too far and in-between during each unnerving scene. Given that this film was rewarded a much higher budget than its 1978 counterpart, gore comes in abundance. Also, given the maturity of film, language and adult themes are stretched far and wide throughout the movie.

These changes from the original seem to have come from the sheer adoration of the franchises fans. A more in-depth explanation as the why Michael is a killer is given because it has always been wondered. Myers is also more foreboding in size because it would make the idea of killing or disabling him harder to grasp. Finally, he is given a more sympathetic persona simply because of the fact that he is the most beloved character in the franchise. It makes the audience more likely to relate or give sympathy to the character, despite that character being a ruthless serial killer.

The foundations of Horror will always be built upon contemporary problems in society. The tropes may remain the same, or evolve if the current fear of a nation predicates the action. However, Halloween (1978) and Halloween (2008) will always reflect the fears and phobias of society during its time. The 70’s saw a more niche approach of specifically scaring a particular group of people, while the 00’s gave an attempt to hit every facet of audience member with a fear that hits a little bit closer to home. Both these films will always show the difference on what the viewers expected out of a Horror movie. What will always remain the same in any Halloween film however, is a daunting killer in a white mask, an abundance of horny teenagers and a short man in a trench coat obsessively following a serial killer’s every footstep.