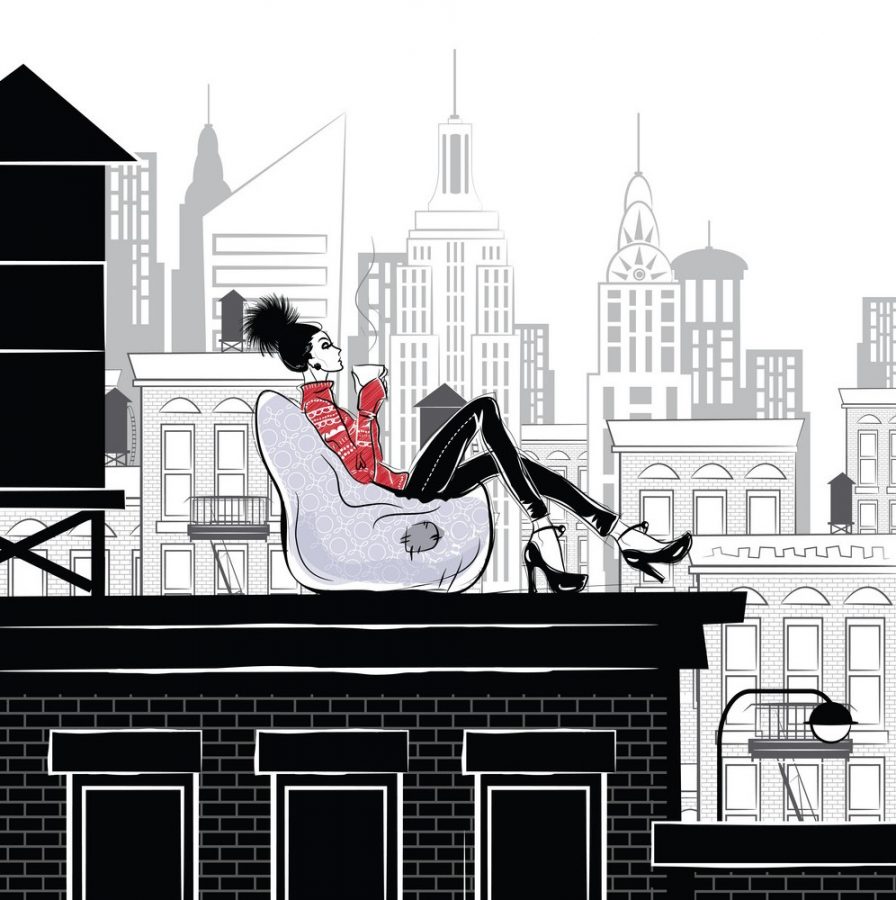 Fashion girl in style sketch on the rooftop in New York

If you take a girl out of the city, can you really take the city out of the girl? I don’t think so! I moved “upstate” from Manhattan when I was 12-years-old and it was such a transition. Now, when I say “upstate,” some of you may freak out because technically it isn’t to be considered “upstate.” I live in Yorktown Heights in Westchester, New York. To be fair though, if you grow up in the concrete jungle with Central Park as the closest sign of nature, then Yorktown feels like the sticks!

The transition was rough for me. I didn’t have any friends up here yet, I didn’t have a phone to communicate, and I couldn’t go anywhere. Since I couldn’t drive, it was like I was on house arrest. I was used to just walking around and going places on the streets, but you can’t really do that in the suburbs. It takes a really long time to get used to. Honestly, almost 10 years later, I still prefer the city in most ways. The freedom a place like Manhattan gives you is hard to live without. A walk in any direction or even just a 20-minute train ride will introduce you to new and exciting things. It always amazed me how the same street could have many different things to see and experience daily.

The first school I attended in the suburbs was my high school. It was super weird to be picked up by a yellow bus and taken to school. Also, there was a bell in between classes, something I never experienced in the city. I felt like I was in a high school movie or something. I actually hoped my high school experience would be exactly like a movie, but I guess life just doesn’t end up that way.  The other thing that made it difficult wasn’t just the new environment, but a new attitude was needed.

See, I grew up in the hood; Upper East Side of Manhattan; Spanish Harlem. For lack of better terms, I had never really seen many white people outside of television. Now, I’m not saying that people who grow up in the hood are “ghetto” and “problematic,” but things are just different there, and honestly, I was a bit of those things. I tend to dislike a lot of people and handle it by yelling at them, and where I grew up, people argued and fought about things daily, and it was very cathartic.

But not in the suburbs, no-no. In the suburbs, if you have a problem with “Jenna”, then you tell “Sally”, “Ashley”, “Ryan”, “Becca”, and 75 more people. Then, you let it stir, and nothing happens… I realized quickly, that very rarely in this new environment will someone actually say something to my face, and if they never knew how to handle it when I do it to them. It is very weird. So I didn’t have a lot of friends because I thought most people were stupid and I yelled at them.

I did find solace with the adults. They seemed to have less drama. The principals, teachers, and cops became my crew. Actually, my high school introduced me to a cop who is now one of my best friends and helped me create a lasting relationship with the local department. I did soften up a bit. I try to be a little less mean here in the suburbs, but I miss my city life and who I was back then. I’ve gone back to live there and enjoyed it, but I’m not the same person I was when I was 12, which I guess is good because I was a kid, but outside the fact I was a child, I was pretty badass. I often think about how different I would be if I didn’t leave, and how different I am now.

I still love city life. I find it way more rewarding and when the time comes, I want to move back. I hope Manhattan will be waiting for me just as passionately as I’m waiting for it. I wonder how much of the city I still have in me.

I guess that’s for others to see and let me know. But I truly don’t think you could ever really take the allure and bright lights of the city out of this girl, no matter how hard you try.