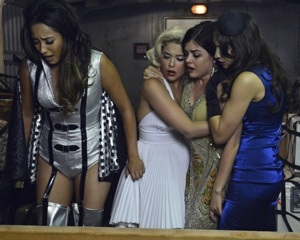 Whoa! That is all I had to say after Tuesday Oct. 23’s episode of Pretty Little Liars.

In this episode the liars, Emily, Spencer, Hanna and Aria, go aboard a Halloween party train ride. The ladies attend the party along with their love interests, friends, and foes.

It was an episode filled with tricks and treats and as usual, left us PLLers on the edge of our seats and a head filled with confusion and excitement.

Who was going to die was the big question a lot of us were asking. About two weeks before the episode was going to air, ABC Family revealed a list of 13 characters and stated that one of them was going to lose their life in the Halloween episode.

Through out the train party, Adam Lambert performs, Aria goes missing, Garrett gets murdered, Spencer learns some interesting facts regarding Aria’s father and Alison’s death, Spencer gets attacked, somebody pretends to be Caleb, and last but not least…a body bag falls out of the drink stand.

Who tried to hurt Aria? Who killed Garrett and was he telling the truth to Spencer? Who attacked Spencer? Who pretended to be Caleb? And is that Alison’s body in the body bag?

Well, let’s break all of these events down and get to the bottom of it, because I have some theories! I don’t know about you, but I was sure left awfully confused and stunned.

In the middle of the episode, Aria is sitting by herself on the train. Adam Lambert then comes over to her and talks with her for a brief minute and asks what her name is. Aria writes her name on the train window when Lambert could not hear her voice over the passing train. When Aria does not pay attention to her soda for a minute, somebody in a Queen of Hearts costume walks by and sneakily places a powdery substance in her drink, I’m assuming a drug.

The next time we see Aria, she is tied up and duck taped in a wooden box next to Garrett’s dead body. Then, they pan back to the window where Aria wrote her name and all the letters are all crossed out, except “A.”

I don’t know about you, but I really thought that that was it for Aria. You hear two voices struggling with the wooden crate Aria and Garrett are held in. It sounds like one boy and one girl, but no one is certain at this point. Towards the end of the episode, the rest of the liars come to Aria’s rescue when the crate almost fell off the back of the speeding train.

Okay, now on to Garrett. Not too long after the episode begins we see somebody, in that commonly seen baby face doll mask, grab Spencer from behind and bring her outside of the train. Shortly after, we see it was Garrett. He tries to help Spencer by telling her all that he knows…or apparently knows. He tells Spence that Aria’s father Byron was having a confrontation with Allison the night of her murder.

But that’s not all. Garrett then tells Spencer (well, us as the audience see the flashback of the actual event) that Jenna thought Garrett killed Allison, but he didn’t…he only pretended to.

Spencer goes and tries to find Aria and the other liars so Garrett could confess this to them as well, but when she returns…Garrett is no longer in sight. Spencer spends the whole train ride in search for Garrett; to then later find out he was dead since the minute she left his side.

A little further into the episode, Spencer gets attacked by the person in the Queen of Hearts costume, the same person who drugged and most likely kidnapped Aria. This mysterious attacked tries to strangle Spence until Paige, Emily’s girlfriend, comes to her rescue. The only clue they have to this mysterious, violent person is a fake nail that latched onto Spencer during the conflict. Spencer and Hanna decide that the fake nail looks too big to fit a woman’s hand. Hmm…could this mean a male suspect?

Now, as for Hannah…somebody completely creeps on her. Caleb, Hanna’s boyfriend, told Hanna he would not be able to make it to the train party, and then showed up there to surprise her. In one scene of the episode, somebody in a Phantom of the Opera mask (the same mask Caleb is wearing by the way) comes up behind Hannah hugging her and kissing her neck.

Hanna believes it is Caleb until she looks up and sees that Caleb is actually all the way across the room. Hanna then turns around and rips the mask off of the phony and sees that under the Phantom of the Opera mask, they are wearing an Alison DiLaurentis mask. The phony then runs away.

At the very end of the episode, we see Mona in her hospital bed at Radley. The camera then pans to under Mona’s bed, where we see the Alison mask. Does this mean Mona was the one pretending to be Caleb? Or was she just hiding the mask for somebody else?

However, before the Mona scene, there is a very important scene where the Liars, Toby, Lucas, Jenna, Noel, and Jason are all in one car of the train waiting to be questioned by the police. I find it odd that Caleb and Paige were not there, but maybe that is because they are completely innocent in this series? Not too sure.

What I also found odd, was the Ezra made an appearance at the end of this episode. He told Aria in the beginning of the episode that he was not going to be able to make it to the party due to some author meeting. However, Ezra “heard” somebody got hurt on the train party and followed the train until it stopped. Hmm…I find that hard to believe.

How would anybody but the cops have known something happened that soon? Also, Ezra looked a little be fumbled, as if he just did something he never thought he would do. Try to kill Aria perhaps? I guess we will have to wait until January to find out!

Anyways, Noel exchanges some rude words with the Liars and Toby defends them. Toby and Noel then start fighting and Toby pushes Noel into the drink bar. A black body bag then falls out from the ice onto the train car floor and Jason, Alison’s brother, realizes it may be his sister’s body.

My theory…I believe that Lucas or Jason were dressed as the Queen of Hearts, drugged Aria and attacked Spencer. I believe Mona was dressed as the Phantom of the Opera, with an Alison mask, killed Garrett and grabbed up on Hanna. I believe that Jenna and Ezra were the ones moving the wooden crate, but I’m still pretty unsure about that. I believe that the body bag does carry Alison’s body and that Toby, now that we know he is part of the A-team, intentionally pushed Noel into the drink bar knowing the body bag would fall out and be discovered.

All the PLL lovers do not forget that new episodes start on January 8th on ABC Family!

What do you guys think? Opinions, observations, or theories? Let me hear them.