Power of the Eyes 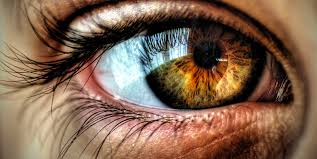 When a gorgeous face starts, then those sparking eyes start to pierce. Looking back deeply and no words have to be said. You feel an instant connection. Then see ones true beauty. Each set of eyes unique and special in it’s own way. William Shakespeare once said, “The eyes are the windows to the soul.” It is no surprise that the eyes can affect our behavior. The eyes hold great power but also leave many unanswered questions. Why would the windows come in so many different colors? What does it mean? Why is eye contact so powerful?

Those brown eyes are beautiful. Why are they brown?

Accordant to http://www.eyedoctorguide.com, Brown eyes appear brown due to the pigment known as melanin the same pigment that causes skin to tan. The darker the eyes the more melanin it contains and the lighter the eyes the less melanin. Melanin can protect the body from some types of cancers. Research suggests that those with brown eyes are less likely to have melanoma cancer or better known as skin cancer. Without that pigment the brown eyes would be blue.

Where did those brown eyes come from?

It has been said that over thousands of years ago everyone had brown eyes. Brown is the most common eye color. In many parts of the world, people only have brown eyes like in Asia and Africa. Scientists believe the brown eye gene is dominant over blue and  green eye genes.

So what about blue eyes?

It has been said that all blue-eyed people may have a common ancestor. Accordant to http://www.allaboutvision.com/conditions/eye-color-blue.htm Blue eyes come from a genetic mutation in a single individual European. Blue eyes have only been developed in 6,000 to 10,000 years ago according to researchers at the University of Copenhagen. Hans Eiberg associate professor from the Department of Cellular and Molecular Medicine said, “A genetic mutation affecting the OCA2 gene in our chromosomes resulted in the creation of a ‘switch,’ which literally turned off the ability to produce brown eyes.” The pigment of melanin in the iris was removed to create blue eyes. Green eyes are the diluted version of the pigment but still have some melanin.

The mystery of the eyes have ben asked by many individuals. It is commonly told to make good eye contact. In an interview eye contact may hold the key to getting the job or not. But why and what makes eye contact so important?

Eye-to-Eye contact can cause arousal. Studies have shown that staring directly into someone’s eye bring out arousal reactions. The arousal can be interpreted in many ways. Depending on the parties involved it can feel like love, sex, fear or friendship. A strangers eye contact can be interpreted as a threat and give you a fear response. While the gaze of a potential sexual partner causes arousal and is interpreted as a sexual invitation.The gaze can make you feel sexy.

Mutual gaze can be a sign of love. Starting into each other’s eyes can give feelings of being in love.

Eye contact can also let you know if a person is faking it. One can know if a smile is real or not from the eyes. When a person smiles for real the eyes narrow and create lines or crows feet at the outer corners accordant to Psychologist Paul Ekman.

Eye contact can also indicate deception. A person assumed to be lying wouldn’t look the person he or she is lying to in the eyes. Or a liar may try to overcompensate on the eye contact in order to appear truthful.

Why are the eyes so important?

Not only can you see the world with your eyes. The eyes allow people to connect with each other in many different ways. The eyes do hold power. The way we see the world and others, can impact a person and the ones around them. Physical appearance is more then what the eye can see. The eyes can allow people to really look. The eyes help one to understand the world and the people in it. The eyes can surprise us and challenge what we believe to know as real. The eyes can play tricks on a person and make a person view things one wouldn’t always see. The beautiful thing about the eyes are that one can never real see what another one sees. Ones interpretation of the world is left to themselves. People cannot experience the same vision. People may have eye but they all can’t see. Some can see with the eyes but not see what other believes to see. Eyes allow people to develop their own perception. Eyes let people view the world from their perspective. Eyes are each different and unique. The way a person sees, the colors they see, the colors of their eyes alongs them to create a vision of themselves. Also developing the image of who they are and thier very purpose of life. Do you understand the power of your sight? How powerful are your eyes?