The Legend of Santa Claus 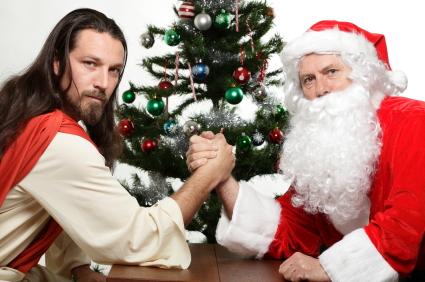 The myth goes like this, a jolly man in red climbs down your chimney at night. He gobbles down the milk and cookies. He leaves you a gift, he decides if you are worthy or a lump of coal goes under the tree. Though no one really knows him, due to his secret layer in the North Pole, his impressionist’s are in shopping malls around the world during this time of the year. But who really is Santa Claus?

The legend starts off with a monk named St. Nicholas. This man was linked to being alive during 280 A.D. in Patara in what we call today Turkey. He was known for his kindness. It has been said that he gave away all of his inherited wealth and traveled the countryside helping the poor and sick. Nicholas’ popularity spread and was known as the protector of children and sailors. His feast was celebrated on the anniversary of his death, December 6. It become a lucky day to make large purchases and to get married. This popularity sprung from Europe.

American popular culture got their hands on the St. Nicholas story around the end of the 18th century. In December 1773 and 1774 a New York newspaper reported Dutch families honoring the anniversary of his death.

The name Santa Claus came form the shortened vision of Sint Nikolass (Dutch for Saint Nicholas) turning into Sinterklaas. In 1809, Washington Irving popularized the story of Sinterklaas by referring St. Nicholas as the patron saint of New York in his book History of New York. Thus becoming a part of American culture.

The celebration was rejuvenated in the early 19th century. The story was made to advertise Christmas shopping in 1820 and by 1840’s newspapers had holiday advertisements. Thomas Nast is further believed to be responsible for the modern representation of Santa Claus as a jolly, rotund man in a red suit, and to be the first to have suggested that Santa could be found at the North Pole and that kids could send him their wish lists there.

Is Jesus Christ and Santa Claus the same person?

Has white hair like wool (Rev 1:14) Santa also has white hair.
Has a beard (Isaiah 50:6) Santa is also known for his beard.
Comes in red apparel Isaiah (63:1-2) Santa also comes in red apparel.
Hour of His coming is a mystery (Luke 12:40; Mark 13:33) also comes in mysterious times in the night when sleeping
Comes from the North where He lives (Ezekiel 1:4; Psalm 48:2) Santa lives in the North Pole.
Is a carpenter (Mark 6:3) Santa is a carpenter of toys.
Omnipotent — all powerful (Rev 19:6) knows all and is Ageless, Santa can deliver all the toys of the world in one night, knows if every single child has been good or bad, for the entire year, sees when you are awake or asleep. Has to be everywhere at once to be able to deliver all the toys in one short night. And is said that he Lives forever.
Jesus Giver of Gifts (Ephesians 4:8) Santa also giver of gifts.
Commands children to obey parents, Santa tells children to obey parents
Everlasting Father (Isa 9:6; Heb 12:2) Santa is Father Christmas
God says, “Ho, ho … (Zechariah 2:6) Santa says, “Ho, ho, ho…”
Sits on a throne (Rev 5:1; Heb 1:8) Santa also sits on a throne.
Lives in men (1 Cor 3:16; 2 Cor 6:16-17) Santa Lives in the hearts of children
Worthy of Prayers and Worship (Rev 5:14 Hebrews 1:6), Santa is worshiped by children.
Prince of Peace, the Image of God (Isa 9:6; Hebrews 1:3) Santa is symbol of World Peace, the image of the Christmas Season

So are Santa and Jesus one in the same? The legend of Santa Claus continues. And it gives kids the concept of rewards for doing good deeds. So the principle behind what Santa Claus is, is what’s important. Happy Holidays!