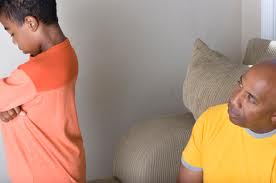 My father and I were never particularly close as I grew up.

He worked at Ford Motor Company as a fork lift operator which entailed unloading parts and materials from incoming trains and trucks for distribution to various places in an automobile assembly complex. He typically worked the afternoon shifts for most of my younger days, so the only times I would really see him would be on weekends, holidays and the occasional times that he would work a day shift.

I can’t say that at the time I was really bothered by the fact I did not see much of him because frankly, I did not like him much then.  A lot of the times when he was around, it felt like the happiness in the room was sucked out and regurgitated back into the space in the form of a dank, sinister, life depleting force that tried to consume me.

He never seemed to be able to just cut loose and have fun. His aura would make Bambi curse like a trucker and bite like a lion.

I often wondered if being drafted to serve in Vietnam had something to do with his objectionable disposition. I know whenever he got mad, it seemed that he would always make some type of reference to his time in “Nam.” I would simply roll my eyes (thinking here the F***, here we go again) and try my best to not let him see me doing it. If I was caught, his anger would intensify because now I was being disrespectful and dismissive about whatever he was going on about.

Fact is, I really could not tell if he was an a**hole before he went off to the conflict or if what he experienced there made him that way.  Regardless I didn’t care; I was stuck with the end result.

But for all the anger I had towards him about who he was as a person, I can never dispute who he was as a father. He was an excellent provider (always made sure to tell us that) and did what was expected of him as the leading male figure in the household. He always made the attempt to do things with me that a good father does with his son, even if it ended up in a total mess.

I knew he loved me in his own way.

I owe much of who I am as a man to his continuous efforts to share with me his interests and knowledge regardless of whether or not I was receptive to it.

There was a part of my life that I totally despised my father. At times when I was an adolescent, as much as I hate to admit it, I wished he would simply just go away and never return like a rock thrown over the side of a boat in the middle of the Atlantic. As I think back, I am sure he could feel the contempt I had for him but despite that, he tried in his own way to overcome the barrier that I put up.

Don’t get me wrong, I’m not sitting here writing this as an admission of guilt to clear my conscience of wrong doing towards him because I truly feel he deservedly was a jerk at times. However, I do say that I wish I was a little more understanding of him back then.

This feeling was really apparent when I recently completed a story about him for my Feature Article II class. I decided to interview him about his life just before he left for Vietnam. He was drafted at 18, married to my mother with child (me) by 20, and turned 21 while in Vietnam.

Though we have talked before about his childhood and life just before he met my mother, this time I really listened. It spurred conversation that far exceeded what I included in my paper and I really felt that I got to know and understand a part of him that I never did. It was a great experience and I totally enjoyed it.

Through my adult life, my father and I have had our ups and downs. It will probably be this way for the rest of our lives, but one thing is for sure; despite what happens you will only have one set of biological parents… one mother, one father. However you choose to process that is up to you. For me, I am thankful that I had both in my life and that regardless of what may have happened, they both were there for me and loved me in the best way they knew how.

Dad for you in particular, I want you and the rest of the digital world that may come across this to know…

Now find your way to let someone in your life know you love them. Trust me, it won’t hurt.