The Herd of America 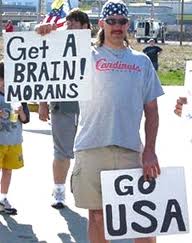 I have a phrase I use called “don’t be a dumb American.”

What do I mean by that? Well let me explain.

First of all since I am an American citizen, I use the word “American” as a reference to me personally. You could easily substitute the word for, Australian, Canadian, human, cat, dog or any other descriptive term that seems fit or that you identify with.

The phrase, simply put, should just say don’t be ignorant I suppose. However for me, I believe that far too many Americans today are simply herded sheep that go along with the masses without truly looking at the facts and making decisions based on their own cognitive efforts.

And that is a shame.

I believe  you are a dumb American because you actually believe that people such as Bill Maher, Oprah or any given Hollywood star have life figured out any better than you or me.

We make them who they are, not the other way around.

Take what you hear in the media with a grain of salt. Make sure that you know regardless of who is saying what, somewhere there is a bias behind what is being presented to you. Try to look beyond the obvious.

Don’t be a dumb American.

Try an experiment with a couple friends; ask them what political party they align themselves with and why so? Do they give known generalizations in line with that party believes in or do you get a response that is solidly entrenched in a foundation based on philosophical facts?

Or worse yet do you get a person that says simply “I don’t care…I don’t even vote!!!

Fair enough, the major political parties all seem to be corrupt bullshitters anyway. With the sensationalism of media today, its easy to see why a lot of people don’t believe in the system because frankly you don’t know what to believe.

God knows I feel that way at times.

But that is more of an excuse for laziness than anything else. In this day and age, how can anyone align themselves with a particular political party because they all seem to overlap one another so much.

Just because I am a black man, should I have to be a Democrat? Just because you are a Democrat does that mean you are a full blown liberal that thinks all conservatives are right wing extremist?

My answer is no to both of them.

When it comes to making decisions regarding party affiliations and candidate endorsements, make sure that you understand that lines are blurred. Our very own democratic president does not support gay marriage. Last year, Senator Roy J. McDonald publically voiced his support of gay marriage.

He my friend, is a Republican.

Don’t get me wrong, one agenda that aligns with the belief of a particular group does make a candidate the best pick overall for said group; but I give this example to show that it is always in your best interest to ensure that you make an informed decision. You never know never know what lurks in the mind of a particular person.

Agree with me or not, just don’t be a “dumb American.”

Now I am not some type of extreme political activist. Quite the opposite, I get tired of all the squabbling that goes on between and within political parties.  Most times would just rather watch old reruns of classic Three Stooges (the real Moe, Larry and Curly thank you very much).

I try my best to be open minded with things in life.

But in order to do so, you must be somewhat in step with what is happening in the society that you are part of or you will be nothing more than a sheep following the herd.