A New York State of Driving 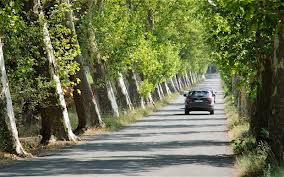 I was driving on my way to a Sunday lunch with a friend. The birds were swooping through the trees doing whatever it is that they do with a furiously intense enthusiasm, much more than I had at that time.

The rays of the sun were just barely warm enough to burn away the morning dew on that young fall morning. I had managed to place the cares of my life on the backburner of my consciousness as I swayed my head gently back and forth to the smooth harmonies of one of my favorite groups, British soul/jazz band Incognito.

I sang out loud, imagining in my head that I was on stage at some intimate lounge, captivating my audience with my smooth as silk melodies.

Of course in reality, my singing could not have been more bad and off key.

But I didn’t care, I was lost in a beautiful Sunday moment and life could not have been better.

This was one of those rare times that I was actually doing the speed limit, perhaps even a mile or two below.  That day, I was one of those people that I normally blow by so quickly I see their car rock in my wake through my rear view mirror, as I scan to make sure I had not just swooshed by an unmarked police vehicle.

Admittedly, it was nice to actually drive and not worry if a local traffic constable or state trooper was waiting around a bend or over the crest of a hill nuking me with a radar gun.

I could actually just drive, no worries. Amazing!

At one point, I even managed to ignore a guy at a light next to me poised to take off like he was at the national drag raceway finals. Yep, just let him rev his motor and take off in a rush of tire smoke and turbo exhaust whoosh.

Nope, I didn’t let him goat me into an impromptu quarter mile drag. Though it would be a betrayal of honesty to say that my foot didn’t quiver momentarily in contemplation of nailing the gas pedal to lock wheels with him for a moment, but I stood fast.

I eased into the accelerator and just leisurely went about my way. I was proud of myself. I just kept singing my smooth jazz hit to my mental audience to the roar of approving applause and soft shouting. I was going to keep pace with my peaceful early Sunday mood.

I had just got off the Taconic State Parkway where my drive had been void of traffic. Of the few vehicles I did encounter up to that point, all waved and smiled as we went by one another. Ok well, at least they didn’t give me the one finger salute or holler explicatives which seem to be a normal part of the frantic pace on the Taconic during the weekday rush.

As I drove north on route 9, I noticed a sign for a tag sale. I figured that I would stop and take a look at “what was doin” and maybe pick up a couple things I didn’t need that someone otherwise was going to throw out. Why not, I was running a few minutes early and had time to burn before my lunch date.

Now, this section of route 9 is a twisty two lane each direction (north and south) road separated by a guard rail. During the week, this is a road that you want to avoid if possible during either morning or evening rush hours because of traffic. Since this was close to midday on a Sunday, it was flowing beautifully and continued with the great sentiments that fellow travelers seemed to have on the Taconic minutes earlier.

I pulled off route 9 onto a side road and spent a few minutes rummaging through the garbage…errr…items, in front of the house having the tag sale. I picked up a couple things that I did not know I needed, and headed back for route 9. Not more than 15 minutes had passed since I left route 9. I now was waiting at a stop sign to turn back onto the north bound side of route 9. But in those 15 minutes, the climate had changed and instead of the peaceful flowing love drivers seemed to exhibit earlier, It seemed that the infamous Hatfields and McCoys now operated every other vehicle.

Where did all this traffic come from I thought. It was moving frantically and compact like salmon swimming upstream during breading season. I waited there for what seemed an eternity trying to seize an opportunity to jump into the fast flowing traffic.

My Sunday morning silkiness was turning to a cheap grade of coarse corduroy. I turned off the radio because the smooth melodies of Incognito begun to patronize me now. I hurled a guitar from the band I was lead singing for in my head at a lady that sat in the front row, nailing her square in the forehead, knocking one of her oversized hooped ear rings clear across the crowd.

My quaint lounge atmosphere had now transformed into a mosh pit as I prepared to jump into the audience feet first, smashing anyone in my path.

To make matters worse, an old lady driving a Toyota Rav4 with a brush guard so senselessly huge, the front of her toy SUV sagged down from the weight came up behind me. She pulled up so close to the back of my car I could see the gaps in the glue between her dentures and gum line as she yelled at me and violently motioned for me to make the turn.

I yelled “what the f**k do you want me to do lady” as I waved my arms on the verge of punching the glass out of my sunroof.

A gapped opened up and I punched it!

The horns from the traffic lit up like a symphony as I made my courageous leap into the sea of flowing traffic. I was crazed with anger at this point. My peaceful Sunday drive had went up in flames with my patience.  I turned the radio back on and started listening to the playlist on my IPod I titled Raging Rock. The first song up was a gitty little tune called Sleep Now in The Fire by Rage Against The Machine.

I got caught at the next light. My right hand firmly holding the stick shift lever, my left foot gently easing the clutch up and down as the car rocked back and forth while my right foot took heavy stabs at the gas pedal, causing the little turbocharged 4 cylinder Chrysler to shout out in angry protest.  I glanced over at the guy next to me in his shiny tricked out and slammed Honda Civic. I could have sworn I heard him listening to some random tune of the 90s new age singer Enya.  He seemed to be whistling and gently swaying his head to the music. What a putz I thought.

The light turned green and I dropped the clutch and floored the gas pedal. In a small cloud of blue smoke and front tires screeching with insanity I was off. The speed climbed as I shot passed the 45 mph speed limit…50…60…70…80…I was on a mission. What it was I did not know or care…there was only one thing on my mind.

I hoped there wasn’t a cop sitting on the other side of that next bend.