The Red, White and Blue Reality 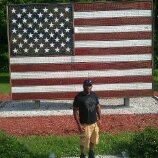 Back when I joined the Air Force in 1985 (which is amazing because I’m only 25…really!), the world was a much more stable place. By that I mean, the United States was not involved in all the police actions that have become an obligation forced upon us or taken on unsolicited.

For me, the threat of war seemed like a distant possibility, and I figured the Air Force would be a great place for me to get independence from my parents and pay for college.

In all actuality, things started to change soon after joining as we attacked Libya in response to the bombing of a dance club in Berlin. Gaddafi had already been stirring the pot with his anti-Israel support of extremist in the Palestinian territories and Syria. Throw in the threat that under Gaddafi, Libya occupied Chad (which was rich in Uranium), there was a fear that Libya could become a nuclear threat.

Libya also had close ties with the Soviet Union, whom we were already deeply entrenched in the Cold War with, so U.S. leaders felt something had to be done.

Ronald Reagan was president, and I don’t care what political party you were aligned with, if you were a member of the military during those days, Reagan was someone you admired for his fortitude when it came to defense of our country and support of the military (Reganomics be damned!)

As an 18 year-old Airman, the world was a place that I had just started to embark on getting to know. Being in the military during the Cold War days, the threat of nuclear war was a staple of your career. Everything we did was in preparation for a nuclear war with the Soviets.

We were taught everything from how to put on our chemical warfare uniform (including gas mask) to surviving the different stages after a nuclear attack while continuing to do our military job. We all hated having to take the yearly class along with all the associated training in-between, and honestly considered it more of a pain in the ass rather then something that might really save our lives.

I always thought what a joke it all was as we played war for training and my young mind never equated the seriousness of the situation to actuality. That is until we would see the training videos about the after effects of a nuclear strike and the propaganda videos we would have to watch about the “Soviet Threat.”

I must admit that after watching these videos, I was scared straight into paying more attention about how to survive a nuclear attack. I think that was the intended purpose actually. It actually worked…at least for a short time.

Yes, soon after the class would be over and I went back to my job, hanging out with my friends/co-workers (one in the same for us in the military) and having the attention span of the typical 18 year old, I would have back shelved everything.

The Soviet threat eventually faded away and the country seemed to be like a prize fighter with no opponent to go up against for a stretch of time. We still did our training, but it just seemed that we were preparing for a battle that would never be fought.

Then Sept. 11 happened. Though we were involved in more conflicts such as the invasion of Panama and Desert Storm, things had been relatively quiet up until that point in my military career.

It’s obvious that the Twin Tower attack was a pivotal shift for our country and her military. With all the subsequent actions as a result, it was the first time the reality that my comrades in arms and I were being faced with real loss of life.

It may seem silly to some that after being in the military all those years prior to the 2001 attacks, I would just start to embrace the very real possibility that I could lose my life to protect our country.

To that I say in my defense, until you actually start to see your brothers in arms returning home with life changing injuries or worst yet in flag draped coffins, things seem far removed.

It is no simple decision men and women that enlist into the military these days face knowing the climate of instability that is the world today. Despite their motivation for joining, there is no doubt that in this day and age your life could very well be loss defending this country and its interests for us all.

I salute each and every one of you, for without you we are nothing as a country.