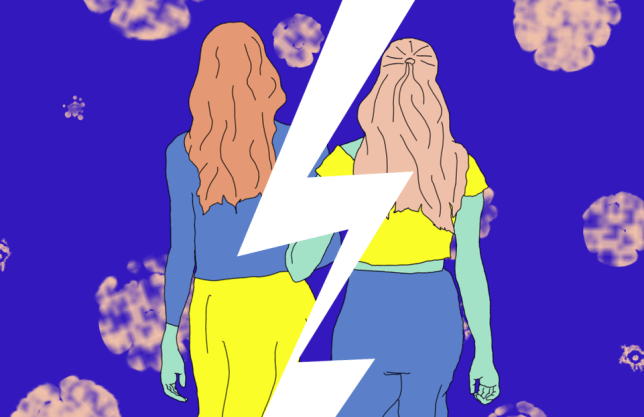 It is very common to hear stories of heartbreak, abandonment, endings of a couple’s relationship… But rarely do I hear honest stories about why friendships ended. And yes, I broke up with my best friend two times in my life. I don’t really know what will happen in the future, but I still think about it a lot.

I had a friend in my life that remained more than a decade, a friend with whom I shared a genuine affection. We met in the summer when I was 15 when she started attending my church. There was a connection between the two of us; we became family by choice.

Although we did not go to the same school, we saw each other often since she lived a block away from me. I was an open book with her. I knew I could trust her. And well, we did everything that best friends do: Talk for hours, go shopping, go for a walk with her dog, meet for a drink, sleepovers, go clubbing, and we even had our favorite TV shows that we could not see without each other.

One day my friend moved out of the country, but that was no barrier to continue with our established and chosen sisterhood. We did not spend many days without talking. We were always updated on our lives, and we supported each other from the distance.

During that period, my best friend met a guy, and they started a relationship. I was very happy for her, of course. On a visit that she made to Spain to see her family (and I guess me), she asked me to help her make a video for her boyfriend’s birthday because her internet wasn’t working. She left me her phone so that at 12 a.m. I could send him the video.

What happened next I don’t really know how to explain. I always had a lot of trust in my friend and never suspected that something was happening. I also don’t understand where the need to do what I did came from… but I did it.

I went back to her WhatsApp and wrote my name in the search bar to see in how many conversations she had mentioned me.

To my surprise, the first conversation that had come out was with a girl (a friend of hers) that I never quite liked; I always felt that she was kinda rude. In their conversation, the two made fun of me, insulted me, and I even discovered that she was talking crap about me the day before, while I was helping her with that stupid video. She also was criticizing me with her boyfriend, which felt really, really weird.

What the hell? Since WHEN has she been feeling like this with me? I started crying. I was so confused and angry. That really hurt me. I didn’t want to read much because… Man, my best friend.

The next day she came to grab her phone. I was so nervous and furious. I knew I wasn’t going to be able to talk without crying. I told her: Here is your phone, now leave. She was like, “What’s going on? I don’t understand.” She wouldn’t leave.

I told her to read her conversation with her friend to refresh her memory. She tried to do the, “have you been reading my messages!?” type of move. Listen, I am not the kind of person who does that, ever. It is not my business whatever she had on her phone, but this… was directly affecting me.

I was so angry, and I started crying. I was constantly asking her to leave my house because I didn’t want to make a scene with my siblings in there. She didn’t move, so I left.

I went for a long walk. While I was walking, I knew I didn’t want people to know about this. I didn’t want to involve anyone because our families were very close. I hated that situation.

After half an hour or so, her mother calls me. She tells me that I was wrong reading her daughter’s messages, that that’s her privacy and all those things. Obviously, my “friend” deleted the messages, and her mother didn’t know what was really happening. I guess guilt made my “friend” need support.

I wasn’t going to disrespect her mother, but I told her that she had to talk to her daughter and not to me. I also asked her not to get involved in this argument. This was between my “best friend” and me.

The drama continued that day. They called my parents while they were working. I was so upset about that. When my parents got home, they wanted to talk to me. I told them what happened and that I didn’t want anyone to get involved. They understood.

I was 18 at that time. I recently finished Hight School and I planned a trip to London to work and study English, so my last three weeks there were very weird. She stopped coming to church, but not her mother and her siblings. They tried to talk to me but, honestly, I didn’t want to listen to anyone’s opinions and comments. I was very upset and hurt. My best friend, the person I was the closest to, even more than my sisters, seemed to hate me with those messages I had found.

I moved to London and forgot about the whole situation. I had to find a job, pay my bills, find a school, and I didn’t have time for anything else. I lived there for eight long months and when I went back to Spain, my “friend” was back too. She wanted to talk to me.

By that time I didn’t have harsh feelings towards her. Honestly, I didn’t care anymore. I didn’t trust her but I wasn’t mad. I guess living alone by myself for the first time in my life in a different country changed my mindset of things. I saw things differently and for sure, I appreciate more the things I had at home. My eight months living in London were very hard and I was just happy to be back.

We went to get ice cream. She asked me about my time in London, and I asked her about her life. I waited for her to bring the conversation up. And she did. She recognized the things she said and apologized. She told me she didn’t know what happened inside of her. She tried to blame her rude friend. She said that her friend used to start talking bad about me and she would follow. Whatever happened, I didn’t care and that argument didn’t work for me. She said that she really missed our friendship and she wanted us to be friends again.

She started messaging me sometimes to go out. In the beginning, I would say no most of the time, so I would see her at church only. I would act weird, cold, and not interested in spending time with her at all. But surprisingly she was persistent. She told me multiple times that our friendship was very important to her and that she was going to give me my time to feel comfortable with her. I give her credit for that. She really tried to make things better.

So with time, we started being friends again. Maybe even closer than before. I totally forgave her and moved on. And for six more years, our friendship was stronger than ever. We both moved from Spain, and have really good, and bad experiences in different aspects of our lives, but we had each other every day. Until now.