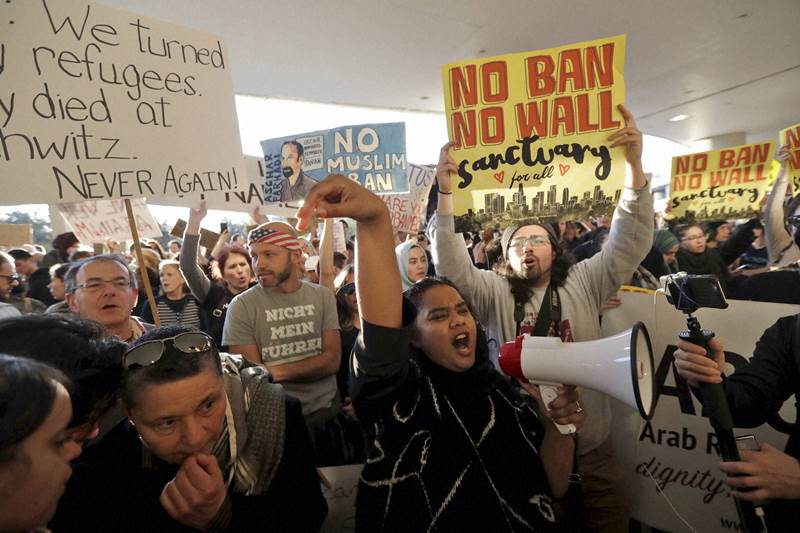 On Friday, President Trump signed an executive order stopping all refugees from entering the country and banning all visas from seven countries in which the population is primarily Muslim. Although this initiative was discussed during his campaign, it took the world by surprise, mainly because of how fast it was put into place without any warning to travelers.

This ban resulted in anxiety, confusion and families being torn apart.

This new restriction will require refugees to take a religious test. Can you imagine anything less American? People being turned away because of religious beliefs?

When I think of America, I think of a cultured, rich country, not only because of it’s history, but also because of it’s habitants. America is a land of immigrants. Some came generations ago, but nonetheless, are immigrants who came to this country for a better life. America is supposed to be the land of the free, where all religions and all races are welcome. It is a place where everyone is free to celebrate and represent their culture and what they believe in as long as it doesn’t hurt others.

And yet here we are, with a man who is and has been openly racist as president.

Fear and racist stereotypes have led to believe that Muslims are dangerous and will hurt you, when in reality you are more likely to be hurt or killed by an American.

There are extremists who have hurt this country deeply. Lives have been lost over nonsense and dangerous religious ideas. However, how can we possibly blame over a billion people for the actions of the few that have done malicious acts?

The world doesn’t blame all Christians for the KKK and it’s horrible actions. The world understands that those were extremists who don’t represent the entire religion. So why can’t we have the same views towards Muslims?

Let’s call the situations for what they really are. This ban is unconstitutional, racist and discriminatory. It puts those trying to escape a horrible ongoing war in great danger, and legal residents not being able to return to what they now call home.

Protests erupted around the country shortly after the ban was announced, and criticism from both Republicans and Democrats were heard. Even vice president Mike Pence disapproved of the ban months before the election. The truth is, these protests are the only suitable reaction to something like this. As long as you do it peacefully, it is your right and responsibility as a citizen.

Travelers were being detained and deported without a proper trial, while thousands protested outside of John F. Kennedy airport.  A federal judge blocked part of the ban, preventing immigrants detained at airports from being wrongfully deported. However, this is proof of this administration views and values, and what America will have to deal with for the next four years. Stephen Miller, senior adviser to the White House said, “Nothing in the Brooklyn judge’s order in anyway impedes or prevents the implementations of the president’s executive order which remains in full, complete and total effect.”

With the possibility of terrorist ties, security measures are needed. This however, does not mean that this is the way to go about it.

So, to all Americans: don’t forget that this nation was built by immigrants. Don’t forget that your family most likely has migrated here at some point in hopes of a better life and that makes you an immigrant as well. Don’t think that because a situation like this doesn’t affect you directly; that it is not your place to express your opinion and do something about it. Don’t forget that change comes from inside, and ending racist stereotypes will change how Americans view muslims. Don’t forget that America is supposed to celebrate and welcome different cultures. Everyone has the freedom to express, embrace and represent their own beliefs.

Don’t be afraid of something just because it is not familiar to you and what you know. Don’t forget that your culture is different to others as well and they don’t judge you because of it. Don’t let irrational fear and racist views cloud your judgment. Educate yourself and look at the facts.

And lastly, appreciate the privilege you have by being born in this country, many don’t have that privilege. Also realize that we are all humans and we’re all not that different from each other.