Be Your Own Luck 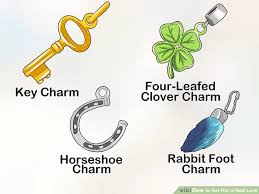 I’ve always wondered whether there are  signs or if it’s just a coincidence. Like if opening an umbrella indoors or seeing a black cat is bad luck. Or if seeing a four leaf clover is good luck. Is any of that even real or is it just something that humans made up to try to make situations for themselves better?

For a while I was a believer that black cat was bad luck until I continued to see more black cats frequently. At that point I refused to believe that I was that unlucky. Nothing drastic was happening to me so I didn’t think anything of it anymore. I also don’t believe that if you open an umbrella indoors that it means bad luck because I’ve never seen anyone have a valid enough reason to open an umbrella indoors. As far as four leaf clovers, I’ve never seen one before and maybe that’s why they are lucky. Who knows.

The only suspicion that I, for some reason, believe that at 11:11 P.M. you can make a wish. I heard that back in middle school and ever since then I do it every chance I get. I feel like the only reason I do it is so I can continue to have hope on the things I really want to happen. Sometimes they do come true so that’s why I keep doing it. There are other times like 1:11, 2:22 or 4:44 that have significant meanings. Almost every single day I always catch 1:11. It’s supposed to mean that everything in life is heading the way it’s supposed to. Whether that’s true or not it gives me hope. Maybe that’s why we believe in a lot of things that give us faith that everything is going to turn out okay. I’ve also heard that if you keep on catching the time with the same numbers that’s also good luck.

I know that some people have a lucky piece of clothing, jewelry, hat and other items. They will wear or bring that specific item to whatever event it is so they’ll have the luck with them. I have never had that happen to me. For some reason I think that’s really far fetched. Which is ironic coming from someone who wishes for something at a specific time. But, I do find it hard to believe that things turn out well for people just because they have this item. I think that’s when the idea of luck being fake comes in. I believe that people may naturally perform well but since they are wearing that item they think it’s all in the item but it’s just them.

Maybe that’s just how life is. We all do the best we can do and we make all the luck ourselves. Maybe luck is just this other type of hope that we think the universe is giving us. Of course we all want everything to be fine in the end or just for the tiniest bit of hope that it will. Since no one can 100 percent be sure of the future people just look around for signs of luck.

The more I think about it, the more I think that there is no luck. Everyday we try to work as hard as we can with the resources given to us and the outcome of anything that we do is what we put in. There is no such thing as failing as all your tests and then by the stroke of luck you pass the class. That’s not how life works. If it was then we all would depend on luck to get us where we want to be. We have to depend on ourselves, not luck. If we put all our trust in luck then we stop working as hard as we should. At the end of the day we are our own luck.