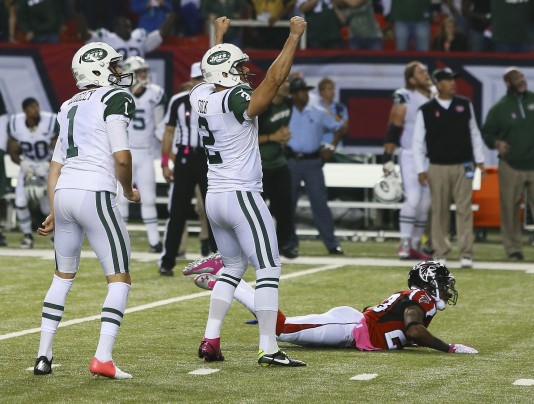 Nick Folk sent the Jets home with a thrilling victory

Numbers are misleading. Before the Jets took on the Atlanta Falcons down in Atlanta on Monday Night Football, the Jets were ten point underdogs. When all was said and done, the Jets certainly did not look like a team that was a huge underdog.

Playing in the loud Georgia Dome is not easy for any quarterback ,but it is even tougher for a rookie who has never faced a crowd so riled up before.  The Atlanta fans were pumped up and loud right from the first snap, but it seemed that Geno Smith did not even hear them. Smith went out and played his best game in his short five game career in the NFL.  He finished an impressive 16-20 with 199 yards and 3 touchdowns.

The young QB was strong all night. With the Jets playing without there best wide receiver in Santonio Holmes, people had doubts that Smith would be able to have a good night.  Receivers Jeremy Kerley, Stephen Hill, David Nelson, Clyde Gates, Jeff Cumberland, and Kellen Winslow all stepped up in place of Holmes and had very productive games.  With the Jets down 7-3 early in the 2nd quarter Smith drove down the field and hit Cumberland on a beautiful back shoulder throw that not many rookie quarterbacks are supposed to make.

Just four minutes after that touchdown, Smith once again drove the Jets down the field and connected with slot receiver Jeremy Kerley for big 16 yard touchdown.  Kerley was able to break a tackle on the 7 yard line, and leap into the endzone right before a Falcons safety was able to get to him.  With 12 minutes to go in the fourth quarter, Smith connected with veteran tight end Kellen Winslow for a 1 yard touchdown pass off of a play action fake to give the Jets a 27-14 lead.

Up to this point in the game, the Jets defense was impressive.  The Jets defensive line may be the best the NFL has to offer. Throughout the game, Jets Mo Wilkerson, Shelodn Richardson, and Damon Harrison were creating havoc, and shutting down the Falcons running game.  With two seconds left in the first half, the Falcons decided to go for it on the one yard line on fourth down. Down 17-7 at the time, coach Mike Smith was trying to cut the lead to 17-14. But the Jets defense was having none of it. Jets linebacker Quinton Coples was able to break through the line and bring running back Jacquizz Rodgers down before he was able to get into the endzone.  This was a huge momentum boost for Gang Green heading into halftime.

One issue for the Jets all night was stopping future hall of famer Tony Gonzalez. Gonzalez said before the season that this will be his last year in the NFL, and is hoping to leave with a super bowl trophy. Gonzalez was a matchup nightmare for the Jets all night. In the fourth quarter, Gonzalez and the Falcons were able to come back from a 27-14 deficit and take a 28-27 lead with just 1:54 left in the game after running back Jacquizz Rodgers was able to burst off a 19 yard touchdown run, and QB Matt Ryan was able to hit Levine Toilolo for a three yard touchdown pass.

With 1:54 left, the Jets offense took the field at their own 20 yard line with 3 timeouts needing at least a field goal to retake the lead. This is the part of the game where Smith showed his confidence and poise. Smith connected with Kerley for a 12 yard gain, than hit Stephen Hill for two huge first down receptions that brought the Jets to around the 50 yard line. After Smith ran for 10 yards and got out of bounds, and running back Bilal Powell ran for another firs down, the Jets ran the clock down to three seconds and than called a timeout. After the timeout, the game was in the hands of Jets kicker Nick Folk. Folk already had one game winner this year, after he hit a 48 yard field goal to beat the Buccaneers week 1. This time Folk was asked to hit a 43 yarder to give the Jets a victory. Folk put the kick right through the goal post, and the Jets walked away with a huge Monday Night Football victory to move them to 3-2, and just one game out of first place in the AFC East.

On Sunday the Jets take on the winless Pittsburgh Steelers in hopes of improving to 4-2.