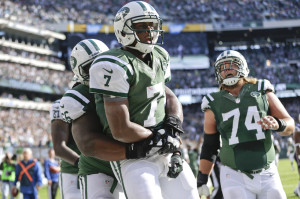 It sucks to lose, but especially to the Jets” was what New England Patriots QB Tom Brady said following Sunday’s afternoon loss to their division foe in the New York Jets.  Earlier in the season Brady had a record going of where he had thrown at least one touchdown pass in 52 straight games. Unfortunately for Brady and the Pats, Brady had not thrown for one in two of the last three games, and this trend kept up on Sunday.

When the Jets played the Patriots earlier this year in Foxboro, the heavy rain really took a toll on the play of both teams, and thus resulted in a very sloppy game. A game in which Jets QB Geno Smith struggled mightily all night, and the Jets receivers had issues just simply catching the ball. On Sunday though, it looked like a new Jets team. Geno Smith showed poise and confidence all day, and did not get rattled at all. As the season continues, the improvement in Smith is quite evident, and it seems that the Jets may have finally found their Quarterback of the future.

Aside from one poor pass from Smith in which rookie cornerback Logan Ryan returned for a touchdown and put the Patriots up 14-7 early on,  Smith played a very solid game.  A main reason for his success was in large part due to the great game his wide receivers played. Reliable Jeremy Kerley had his best game of the season, constantly torching the Patriots on crucial third downs for the Jets. Kerley was also able to haul in the first touchdown of the game on a laser pass from Smith in the corner of the endzone. David Nelson had only been a Jet for two weeks, but Nelson looked like a seasoned veteran on Sunday. Nelson made a spectacular catch on a deep pass from Smith on a third down conversion that allowed the Jets to continue their drive. Nelson also had many key blocks that helped Jets running back Chris Ivory have some nice runs.

Speaking of Ivory, the former New Orleans Saint had his best game as a Jet on Sunday. Ivory had 34 carries for 104 yards, and ran hard all day. With the Patriots defense all banged up from injuries to three key starters, Jets Offensive Coordinator Marty Mornhinweg took advantage and had the Jets run the ball over 5o times.

While the offense had a nice day, the Jets defense knew it had its hands full facing future hall of famer Tom Brady and crew. To make matter worse for the Jets, pro bowl Tight end Rob Gronkowski made his return from an injury that had sidelined him for the first six weeks. The Jets defense did give up some big plays, but overall the defense did its job.

Coming out of halftime, the Jets were down 21-10, and the Patriots had the ball first.  With the ball inside the twenty yard line, Brady dropped back and tried to connect with Gronkowski, but Jets second year safety Antonio Allen was having none of it. Allen jumped in front of Gronkowski to intercept Brady’s underthrown ball and returned it 23 yards in style flipping into the endzone for a touchdown.  This was the turning point in the game, and gave the Jets all the momentum.

In typical Jets- Patriots fashion, sixty minutes was not enough to decide the winner in this game. In overtime, Brady and the Patriots had the ball first, but the Jets defense stood strong and forced the Pats into a 3 and out. Geno Smith and the Jets offense took over and moved down the field, but were stopped on third down, which et up the Jets for a 56 yard field goal.  Rex Ryan had called his kicker Nick Folk the “Folk Hero”for his clutch game winning kicks. While Folk had been perfect all season, this was the farthest kick he had ever attempted in his career. His kick wound up having the distance, but was wide left. The good news for the Jets was that there was a flag on the play. The Flag was a controversial call on Patriot lineman Chris Jones, who pushed his teammate forward in hopes to block the kick. Unfortunately for the Pats, that is a penalty that would cost that 15 yards.

After all was said and done, Nick Folk was in position to attempt a 42 yard field goal to give the Jets the win. Folk put the kick right through the middle of the goal post. Gang Green had beaten the Patriots 30-27 in thrilling fashion. While it ended much different than many had expected, the “Folk Hero” came through again.