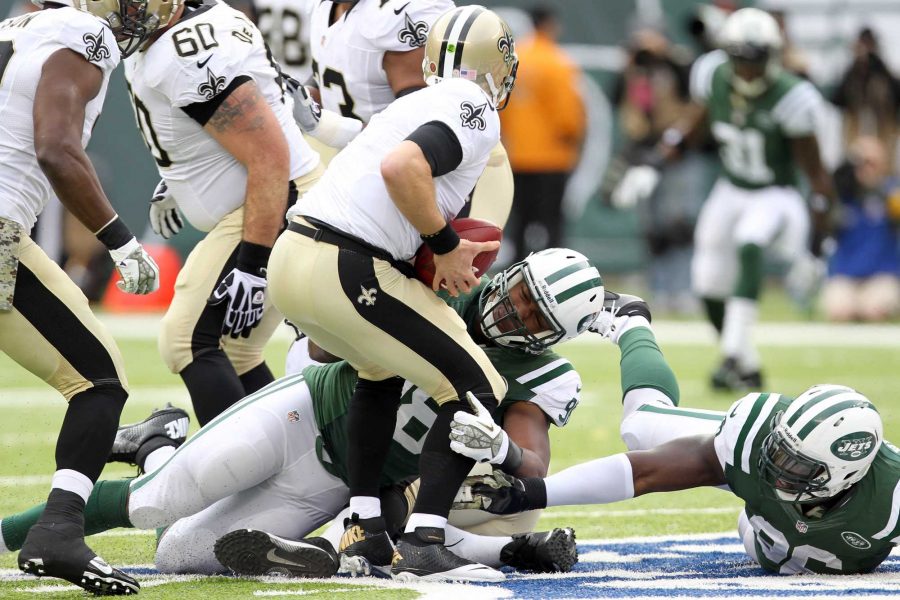 After being embarrassed by the Cincinnati Bengals, in a game that I was in attendance for of course, the Jets had a shocking 26-20 victory against the 6-1 New Orleans Saints at Metlife Stadium on Sunday. The win brought the Jets record to a very respectable 5-4 record heading into the bye week.  Before the season, people were predicting that the Jets would be lucky to win 5 games all year. Through 9 weeks, the Jets have already matched that mark. The Jets season up to this point has been nothing short of a roller coaster. One week they look like a playoff contending team, and the next week they look like a team that is one of the worst in the league.  Against the Saints, the Jets were able to prove why they are legit contenders.

The Jets formula to success is pretty simple.  If they play great defense, run the ball efficiently, and Geno Smith does not turn the ball over, the Jets more than likely will win.  On Sunday, all aspects of the game were clicking for the Jets.  While Geno Smith did not have his best game of the year, throwing for less than 200 yards and attempting only 19 passes, Smith was used as a game manager all day for the Jets.  Smith was able to run in a huge three yard touchdown before halftime to give the Jets a 20-14 lead. The real story of the game though was Jets running back Chris Ivory. The former Saints running back had the best game of his career against his old team rushing for 139 yards on 18 carries in a touchdown. Ivory had 100 yards after contact, which is an incredible performance by any running back.  Ivory was ran like a man on a mission a day, busting runs for 50 yards and 30 yards that set the Jets up in great field position all day.

While the Jets offense did its job, the Jets defense had a tough task trying to stop Drew Bress and the Saints high powered offense that had been almost impossible to slow down all year. Rex Ryan and his defense were ready to play though, right from the first snap. The strength of the Jets defense is their strong defensive line, and the defensive line was the key factor in the game Sunday. They were able to shut down the Saints rushing attack, limiting them to under 50 yards, while outing pressure on Drew Brees, and confusing the future hall of famer all day.  Jets Antonio Cromartie and Demario Davis were able to intercept Brees, which was a result of great play by the defense.

Towards the end of the game, the Saints were faced with a 4th down and inches to go. After a timeout, the Saints decided to run an end around to their tight end, but the Jets were not having any of that. Linebacker Quinton Coples read the play perfectly and tackled the tight end in the backfield, resulting in a turnover, and allowing the Jets offense to get back on the field. This turned out to be the biggest play in the game. The Saints were able to get the ball back one more time at the end of the game, but the Jets defense once again was up for the challenge, On 4th and 19, Coples was able to hit Brees and force an incompletion that just about ended the game.

This was a huge and needed victory for the New York Jets. This is the type of win that can change the course of a season, and after the brutal loss to the Bengals, this team needed this win if they want to have any hopes of making a playoff run. It is going to be a very interesting last seven weeks of the season.