It is time for the NFL Draft 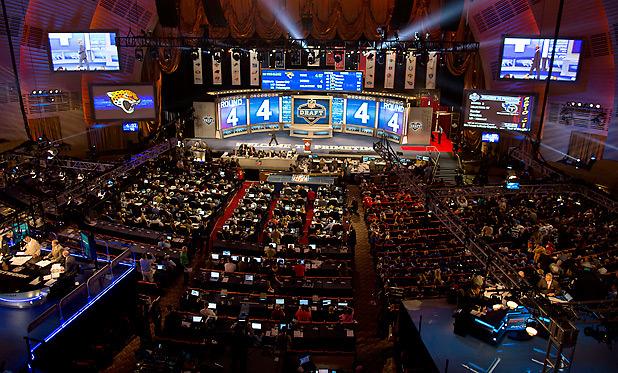 To be quite honest, I have already started my own countdown to when the NFL Draft begins. Ever since I was little, I have always had a serious interest in the draft. Even at the young age of 12, I remember sitting on my couch waiting anxiously for the next pick.

Now that I am older, not much has really changed, I love watching the draft, and anxiously waiting until it is the Jets turn to select a player and finally make their dream come true of being drafted into the NFL.  In terms of the draft this year, this could very well be the most important draft for the Jets in recent memory. The team has many holes they need to fill, predominantly at the skill positions of the offensive side of the ball. The Jets are in dire need of wide receivers and tight ends to help young quarterback Geno Smith continue his growth in becoming a solid NFL player.

Lucky for Gang Green, this draft is loaded with wide receiver and tight end talent. Depending on what the team decides to do in free agency in terms of adding certain players o fill holes, the Jets should be in a great position to add an offensive playmaker at pick number 18. In recent years, the Jets have drafted mainly defense in the first round, but in my opinion, that needs to change this year. While they have holes at the linebacker position, as well as a safety, the need for offensive talent is much greater. Jets General Manager John Idzik will have around 12 picks in this years draft, and with those twelve picks he has the chance to really improve the Jets team. With so many picks, Idzik also has the option of trading up in the draft, and grabbing a player he feels would significantly help the Jets in the long run.

Last season, at least in my opinion, the Jets had a very strong draft class. First round pick Dee Milliner struggled early on, but really stepped up his play towards the end of the season.  With the Jets other first round pick, they chose Sheldon Richardson, who was an absolute beast for the Jets. Richardson was arguably the most impressive rookie in the entire NFL. Geno Smith was the Jets starting QB for all 16 games, Brian Wainters started 12 games at Left Guard, and 7th round pick Tommy Bohanon also started every game at the fullback spot.

If I had to predict one player who I feel the Jets should take if he I available at  number 18 is North Carolina tight end Eric Ebron. Ebron is very similar to all pro tight end Vernon Davis who plays for the San Francisco 49ers. Ebron would be a huge boost to the Jets offense, and would instantly become the Jets best playmaker on the offensive side of the ball. If Ebron is off the board, adding a wide receiver would be a smart decision. A guy like Odell Beckham jr, or Marqise Lee would be nice selections for the Jets, as both of those guys are big time playmakers that the Jets have not had at the receiver spot for years.

All in all, this is a huge opportunity for John Idzik to turn the Jets into contenders in the AFC. Is it  May yet?