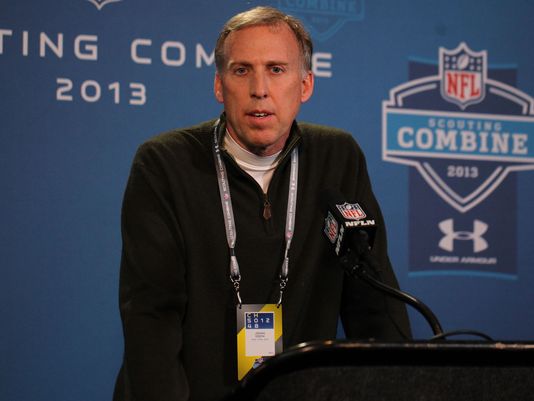 The claim among Jets fans was mostly the same. ” How can the Jets not bring back Revis for just 13 million dollars??” . ” We have a hole at cornerback, why not bring back Revis?”. To me, the answer is pretty obvious, John Idzik has a terrific plan for the future of the New York Jets.

Signing Revis would have given the Jets a star cornerback for just one year. Would Revis help the Jets in 2014? Absolutely, since Revis is still considered one of the best players in the entire NFL. On the flip side though, signing Revis would not have been a move for the future. The Jets already went through the headache of Revis just last season, before he was traded to the Tampa Bay Buccaneers, who have already moved on from him. Yes John Idzik wants to win in 2014, but he also wants to create sustainable success.

Sustainable success is something the Jets have not had in a very long time. While just a few years back, the Jets were one win away from reaching the Super Bowl, the moves made by former General Manager Mike Tannenbaum are why the Jets have struggled the last few years.  ,Tannenbaum’s ultimate philosophy was to ” win now”. Tannenbaum gave lucrative contracts to young QB Mark Sanchez and highly criticized wide receiver Santonio Holmes, both who are no longer on the team. The problem was these contracts severely hindered the Jets ability to add more players to the roster since they did not have the cap space from those contracts.

What John Idzik has done has been a breath of fresh air. Instead of going ” all in” for the 2014 season, Idzik has built the foundation for the Jets to have success for years to come. The Jets have a league high 12 draft picks in the NFL Draft this year, which is more than they ever had under Tannenbaum.

What fans need to understand is that the Jets are not just one star player away from becoming instant Super Bowl contenders. The Jets have many holes on the roster, including cornerback, wide receiver, and tight end, that desperately need to be addressed. While Idzik could have gone out and spent money on free agents to fill those holes for a year or two, Idzik has said numerous times that the Jets will rely heavily on the draft, which is a much cheaper option.

A prime example of the Jets relying more on the draft than free agency is the pursuit of cornerback Dominique Rodgers-Cromartie. After all was said and done, it was down to the Jets and the Giants as to where he would land. While the Jets offered him a contract, the Giants contract was much for more years, and more money. Why did the Giants offer so much? It is simple, the Giants had a brutal 2013 season, and their window of wining under Eli Manning is close to coming to and end. That is by no means a shot at the Giants, but just a fact. Eli is not a youngster anymore, the Giants need to do everything they can each offseason to build the best team possible to go for the Super Bowl, and they have had a tremendous offseason adding over 20 players.

That is the differences between the two teams, the Jets still have a young QB in Geno Smith, who is entering just his second season in the league. The Jets would be foolish to go ” all out” with such a young team.

Despite the scrutiny, John Idzik has done a nice job this offseason improving the Jets. He added the number one wide receiver on the open market in Eric Decker, the number one QB on the market in Michael Vick, and signed a young, and talented right tackle in Breno Giacomini. Just yesterday, Idzik signed WR Jacoby Ford, and CB Dimitri Patterson to low cost one year deals. Both players will provide good depth at their respective positions.  Idzik has done a nice job adding quality pieces in free agency, while not breaking the bank, and without hurting the Jets for the future.

While the Jets have been on the back pages for always being the center of attention, what John Idzik has done is getting the Jets to once again be respected.  With Idzik relying heavily on the draft, the future of the Jets is in great hands.