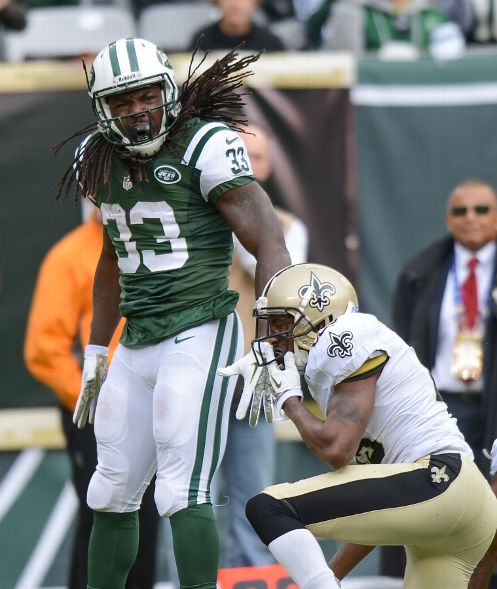 A few years back, the New York Giants had a trio of running backs that were called ” Earth, Wind, and Fire”. The ” Earth” was Brandon Jacobs, the ” wind” was Derrick Ward, and the “fire” was Ahmad Bradshaw.

Going into the 2014 season, it is very possible the New York Jets will have a similar version of ” Earth, Wind, and Fire”, and no I am not talking about the band. Come September the Jets may have Chris Ivory, Chris Johnson, and Bilal Powell as the three main running backs on the team, which would arguably make one of the best trios in the entire league.

The ” Earth” of the running back group would be Chris Ivory.  Ivory was traded to the Jets last year from the New Orleans Saints in exchange for a 4th round draft pick in the 2013 NFL Draft. That trade turned out to be a steal for Gang Green. Ivory enjoyed a breakout season in his first year for the Jets staying relatively healthy all season for the first time in his entire NFL career.

Ivory is a hard, downhill runner who is a load for any defender to bring down. Ivory is exactly the kind of runner that thrives in a Rex Ryan style offense. Last season , Ivory started off slow out of the gate, but really came on strong as the season went on. Ivory is a very capable back who is able to play on all three downs. What Ivory really needs to work on is catching the ball out of the backfield, which would really add a different dimension to his game.

The ” wind”of this group would be Chris Johnson. While CJ2K is not a Jet yet, he is in Florham Park meeting with John Idzik and the Jets today, and according to multiple sources, there is a mutual interest for both sides to get a deal done.  While Johnson is not the same player he was a few years back, there is no denying the type of player CJ still is. Johnson has world class speed, and his style of play would complement well with the game of Ivory. Johnson has the ability to break a long run at any point, and constantly keeps the defense on their heels.

An underrated part of Johnson’s game is his durability. Despite suffering a leg injury early in the 2013 season, Johnson did not miss a game all season long. Johnson is also a huge threat out of the backfield, which would be a huge addition for the Jets offense. A part that has been lacking from the Jets offense in recent years has been the screen game, but with the addition of Johnson, the screen game would get a huge boost. It would be a huge addition for the Jets if they are able to land Johnson.

Bilal Powell would be the ” fire ” of this group. Powell is not a flashy player, and does not excel at just one thing.  What Powell brings to the Jets is invaluable, he seems to do a little bit of everything. Powell is a very durable and reliable running back who is a perfect guy to come in and give the other running backs a breather. Powell can be relied on to catch out of the backfield. What Powell also protect the quarterback. He is a very good blocker, and is very valuable to Geno Smith.

If the Jets are able to lock up Johnson, they would have arguably the best trio of running backs in the entire NFL.  It is not out of the question that ” Earth, Wind, and Fire” will make a return to the NFL in 2014.