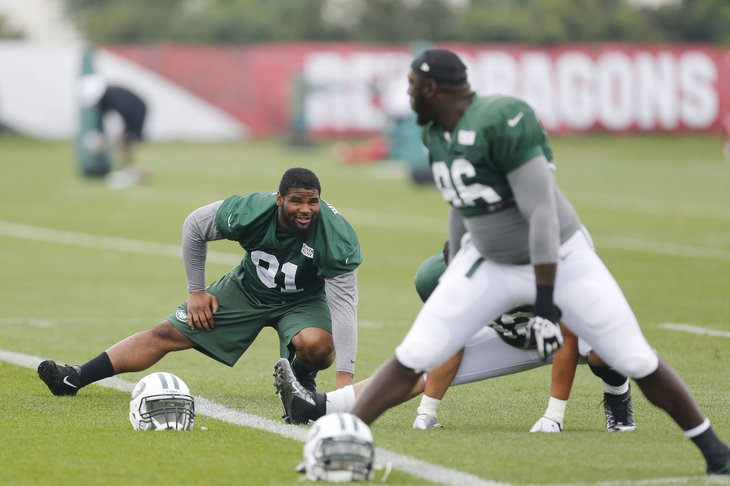 Back in the 70’s and 80’s, the Jets had one of the most dominant defensive lines in NFL history. Joe Klecko, Marty Lyons, Mark Gastineau, and Abdul Salaam were the members of that defensive line that were called ” The New York Sack Exchange” for how often they caused havoc on the opposing quarterback. While that group truly was dominant, is it possible that the defensive line the Jets have now is even better? You better believe it.

The members of the Jets defensive line are Muhammad Wilkerson, Sheldon Richardson, Kenrick Ellis, Damon Harrison, Quinton Coples, and Leger Douzable. While all are a big part of the rotation Rex Ryan loves to use, the four ” main” impact players are Wilkerson, Richardson, Coples, and Harrison. All of these guys are under 25 years old, and are just entering the prime of their careers.

The ” leader” and ” veteran” of this staff even though he is just twenty four years old is Muhammad Wilkerson. A first round pick for the Jets back in 2011 out of Temple University, Wilkerson has been a tremendous player for the Jets ever since he arrived. So far in his young career, ” Big Mo” as coach Rex Ryan loves to call him already has 18.5 sacks, with 10.5 of those coming during the 2013 season, which he was the first Jet since John Abraham in 2004 to record double digit sacks in a single season. While Wilkerson’s stats are impressive, he brings even more to the table.  Wilkerson is viewed as a leader for not just the defensive line, but the entire defense, which shows a lot about the character of Wilkerson, and how much he is respected by his teammates even though he is only twenty four.  Wilkerson had his best season as a Jet last season, but do not be surprised if he has an even better season this season with the continued growth of his teammates, which would force the defense to leave Mo one on one with a lineman. In that case, advantage Wilkerson.

Speaking about the growth of Wilkerson’s teammates, it is scary to think that Sheldon Richardson was only a rookie last season for the Jets. While Sheldon was the best rookie on the defensive side of the ball last season with him winning defensive rookie of the year honors, he was one of the best defensive lineman in all of football.  While mainly playing over the center, Richardson was a force to be reckoned with all season long. Richardson excelled in blowing by the center and shutting down the opponents running game, with him having an impressive 78 tackles from the defensive tackle spot. Richardson was also able to get himself 3.5 sacks, which he hopes to improve upon in the 2014 season. When recently asked about his play, Richardson said ” You’ve yet to see the best of Sheldon Richardson” which is music to Jets fans ears, but trouble for opposing running backs and Quarterbacks.

Damon Harrison has been a feel good story ever since he arrived in NY. An undrafted free agent out of William Penn, Harrison over came the odds and not only made an NFL roster, but he is now one of the best players on the Jets. Harrison is known for his dominance in stopping the run. While “Snacks”, a nickname given by Rex Ryan, is terrific against the run, Dame also is a threat in terms of rushing the passer. He recorded the first sack of his career last season against Patriots QB Tom Brady, which you can bet is a moment he will never forget.  Just 25 years old, Harrison is just entering the prime of his career.  With a year under his belt starting for the Jets, look for Harrison to have an even better 2014 season for the Jets.

The final piece of the Jets dominant defensive line is Quinton Coples. While Coples was moved to OLB before last season, he still plays with his hand in the dirt more often than not. Coples is arguably the most physically gifted player on the Jets team. Now entering his third season as a pro, Coples is finally looking to give the Jets a double digit sack season that he is certainly capable of. Coples is known for his pass rush, and is a nightmare for offensive lineman due to his great speed and strong bull-rush ability. Coples had 4.5 sacks last season, although the number would likely have been more if Coples did not suffer an ankle injury early in the season. With Coples finally fully healthy, it is trouble for opposing teams offenses.

The most impressive thing about the Jets defensive line is how young all of these guys are. All four of these guys are just entering the prime of their NFL careers. As they continue to play with each other and their chemistry continues to grow, this group has the potential to be one of the best defensive lines in football for years to come.