Fascinating Moments in History: Julius Caesar and The First Triumvirate 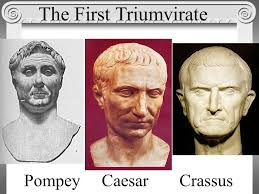 Several days ago, March 15 to be exact, was the Ides of March. The Ides of March is notorious for one specific reason, and while most people would be familiar with the individual behind the day’s infamous history, most will not know as to the reasons why.

So, what exactly did happen on the Ides of March that gave an ordinarily mundane day such a notorious legacy?

The assassination of dictator Julius Caesar.

But the fascinating history of Julius Caesar is not limited to his violent demise, in this column, we will dive into one of his most fascinating moments, The First Triumvirate.

It began in 60 BC when Caesar sought election to the consulship for 59BC. Caesar was ultimately successful.

Caesar was in many forms of debts, both financially and politically. One of the people he was indebted to was one of Rome’s most prominent generals and statesman, Marcus Licinius Crassus, who had helped alleviate some of Caesar’s debt earlier in his career. Crassus was also the man who defeated legendary gladiator turned general Spartacus. In return for settling some of Caesar’s debt, Caesar was to aid in support of Crassus against his rival Gnaeus Pompeius Magnus, or Pompey.

Ceasar, being the crafty tactician that he was had begun to sow the seeds of a potential partnership between himself and the two rivals Crassus and Pompey when he ascended to Consul.

This political powerhouse became known as The First Triumvirate.

During Caesar’s one-year stint as Consul, the political aristocracy had begun to see a potential threat due to the Triumvirates attempt at a law to redistribute land to the poor, one that would be completed with force if necessary, Pompey even filled the city with his troops to intimidate rivals.

In an attempt to curtail his power, they gave him allotted the pastures and wooded areas of Italy rather than awarding him a Governorship which would enable him command in the military. With the power and influence of the First Triumvirate behind him they overturned the law.

Caesar secured Governorship of Northern Italy (Cisalpine Gaul), and Southeastern Europe (Illyricum). This also awarded him immunity from prosecution for another five years, the term of a Governor, due to irregularities during his one-year stint as Consul.

Despite this, Caesar was still in severe debt. However, the Governorship allowed numerous opportunities to secure financial benefit, one of which was war.

Caesar’s regions were bordered by hostile Germanic and Gaelic tribes. Rome’s Germanic ally the Aedui tribe had been massacred by their rivals the Sequani and Arverni tribes. After securing Governorship of Southern France (Transalpine Gaul), Caesar, who had four legions at his disposal, used the threat of unconquered Gaelic territory bordering his regions as an excuse to begin a conquest of Gaul.

Caesar immediately began his conquest of Gaul and subsequently subjugated the region, one of his legions also began a conquest to the far north of France, setting himself up with an excellent staging point for an invasion of Britain in the process.

Gaul was effectively conquered in 52 BC when, at the Battle of Alesia, Caesar won one of the most decisive victories in military history over the Gaelic commander Vercingetorix.
Caesar’s success had begun to splinter the Triumvirate, both Crassus and Pompey had become zealous of Caesar’s success and the Triumvirate’s opponent Clodius had been undermining the already frayed relationship between Crassus and Pompey back in a Rome that was enveloped in chaos.

In response, the Lucca Conference was held between the three Triumvirs in 56 BC that briefly patched the cracks, the meeting saw that both Crassus and Pompey would see joint Consulship in 55 BC, once they had they would extend Caesar’s Governorship by another five years. Following their Consulship, Crassus would assume governorship of Syria, and Pompey would keep Hispania (Spain).

Pompey’s support was secured in large part by his marriage to Caesar’s daughter Julia, whom had died in childbirth in 54 BC while Caesar was in Britain during his conquests.
Just a few months later, over in the east, Crassus was defeated by Parthian Spahbed (General) Surena at the Battle of Carrhae, one of Rome’s greatest defeats.
Crassus was killed in the ensuing attempts at a negotiation, ones that failed and turned violent.

In Rome, the threat of Civil war due to friction between Caesar and Pompey, the latter of whom was deeply jealous of the former, forced the Senate to name Pompey as the sole Consul.
Pompey subsequently married the daughter of Caesar’s rival and in 53 BC, Caesar’s political alliance had crumbled into oblivion.

By 50 BC, Caesar’s Governorship had come to and end and he was beckoned back to Rome while being ordered to disband his army.

Caesar, who had the threat of prosecution looming over him from some of his nefarious deeds during his earlier political days feared his future without political immunity that he no longer had.

Because of this, he refused, and Pompey formally accused him of both insubordination and treason.
Caesar, who still had four fiercely loyal legions at his command only brought on with him, Legio XIII Gemina, when he crossed the Rubicon river in the frontier boundaries of Italy on January 10th 49 BC.

Militarily, Pompey greatly outnumbered Caesar, the catch being his troops were a newly formed unit with no overwhelming sense of loyalty to him while Caesar had one battle hardened legion ready to die for him in tow.

Because of this Pompey had no intention of meeting his partner turned rival on the field of battle and subsequently fled Rome with a large sum of Roman Senators with him.
Rome belonged to Caesar.

However, Caesar remained steadfastly behind Pompey and attempted desperately to catch him before he escaped, although he failed.

Following Pompey’s escape, Caesar turned his attention to Pompey’s governorship territory in Hispania and left Rome under the watchful guise of Mark Antony. After a twenty-seven-day march, Caesar routed and defeated all of Pompey’s lieutenants and immediately turned back east towards Illyria for a climatic confrontation between the two legendary generals.

Unfortunately for Caesar, The Battle of Dyrrhachium did not go Caesar’s way and despite the loss Caesar avoided perhaps a catastrophic defeat and only left with an undecisive victory for Pompey.
Before the battle, a siege of Dyrrhachium began. Pompey was in a tactically excellent position as he had his rear to the ocean and his front blocked by a terrain loaded with hills and uneven ground. Caesar used an old strategy he used at Alesia and attempted to build walls and blockades in an attempt to trap Pompey by the sea, to which Pompey did the same preventing Caesar from getting to him. The result was a no mans land that rivaled trench warfare in the first world war.

With the lands picked clean and fall approaching, both sides became somewhat desperate. Pompey made the decision first to break from the siege. In a huge break, two Gallic auxiliaries were caught stealing pay from Caesar’s legionaries but escaped and reached Pompey, in the process giving Pompey the details to Caesar’s weakest point. The weakest being a section of Caesar’s wall that hadn’t been completed.

Pompey launched the assault with six legions toward the wall and attacked Caesar’s IX Legion (the famed legion that would go missing in Caledonia or Scotland). Pompey also sent light infantry to attack towards the sea. The weakened wall collapsed and IX Legion was forced to pull back due to heavy casualties.

Caesar ordered a counter attack under Marc Antony (who had recently joined him from Rome) of about four thousand men (equal to twelve cohorts). The counter attack was successful as the confused forces under Pompey began to lose ground. Caesar followed this up by sending thirty-three cohorts towards an abandoned camp that Pompey had occupied several days earlier. However, Pompey had reinforced the camp and outnumbered Caesar’s forces two to one. With Mark Antony’s forces at the breach faltering and the forces at the camp outnumbered, Pompey ordered a large group of infantry and upwards of three thousand cavalry to flank Caesar’s right wing. With the failed camp counter attack and the threat of being outflanked, Caesar ordered a retreat that broke down into his troops routing.

Had Caesar been outflanked, his destruction would have been inevitable.

Caesar resigned himself to the defeat and began to rethink his strategy. Pompey did not pursue Caesar, believing him to be decisively beaten.

After both forces re-grouped and re-habilitated, they met once again at Pharsalus, in central Greece.

Pompey deployed his men in three lines, with himself and Legions I and III on the left, legions from Syria under Scipio in the middle, and Cilician and Spanish auxiliary forces to the right. Pompey organized his entire cavalry under Labienus along with his archers to his left.

Pompey’s plan was called a “hammer and anvil tactic”, allowing Caesar’s forces to charge at him while they remain sedentary, tiring Caesar’s forces out in the process. Pompey’s massive cavalry would proceed to overwhelm Caesar’s much smaller cavalry and then flank the infantry leaving them stuck between Pompey’s infantry to their front and his cavalry behind them.

Caesar was aware of his numerical disadvantage, a traditional line consists of ten men deep, Caesar was forced to disperse them evenly leaving only six men deep, to appear equal. To Caesar’s left, his war torn IX Legion along with Marc Antony and his VIII Legion. The center was commanded by Roman General Domitius and gave Sulla his preferred X Legion on the right. Upon seeing Pompey’s formation, Caesar felt uneasy and opted to thin his lines even more to form a fourth unit. The fourth unit would be hidden in an attempt to aid in countering Pompey’s cavalry.
Caesar ordered his X Legion under Sulla to not advance unless ordered.

At this moment Caesar revealed the hidden fourth line and they attacked with their pilas, which were normally meant for hurling at the enemy infantry, effectively making them spears. Labinius’ cavalry panicked and suffered massive casualties before fleeing from the battlefield, leaving the left flank of Pompey completely vulnerable.

Caesar then gave the order for his X Legion under Sulla to attack the left wing, eventually giving the order for the rest of his reserves to charge.

One by one Pompey’s lines faltered and fled, eventually forcing Pompey to see the inevitable and flee himself. Pompey ordered his few remaining men to defend him while he gathered gold, and his family to escape, leaving behind his general’s gear.

Pompey would then flee to Egypt where he would be promptly assassinated on the orders of Egyptian co-Pharaoh Ptolemy XIII. He was be-headed and his severed head was sent to Rome as an attempt to win Caesar’s favor, however Caesar’s reaction was the exact opposite.

We will explore further in Part 2.