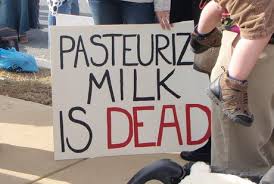 We are all drinking poop with every glass of milk. We are also drinking fat.

Well, that is only partially true. Usually, the milk undergoes processes before it goes in your fridge, but can you really trust the dairy companies?

First, lets discuss the living conditions of a lot of the cows. Many of them are kept in stables and the stables aren’t kept 100% sanitary. How does this affect our milk, you may ask? Well, I’ll tell you!

As the cows live in there own little ceils in the stables, sleeping isn’t the only thing that they in there. Pooping, peeping, feeding their calves and being fed; their whole lives are being kept in those barely well kept four walls. The cows are living within their own filth.

Because they are living in their own fecal matter, the matter is on their utters. Once they are milked, the bacterium within the fecal matter is being brought down with the milk. But as we know, the FDA exists, and they wouldn’t allow us to drink that, so what process does the milk undergo?

Boiling milk to kill the bacterium in the milk is a process called pasteurization. Cows milk is boiled for 15 second at 71.7 degree Celsius or 161.06 degrees Fahrenheit. I know that 15 seconds doesn’t seem like a long time, but because the boiling point of milk is close to 100 degrees Fahrenheit, 15 seconds of being boiled in heat is good enough to kill the bacteria within the milk. But, this isn’t something to fully praise.

That is because as it is being boiled, all the other things that milk consists of is boiled as well. The sugar in it, primarily lactose, is changed. Once it comes out of being boiled, the lactose is changed from normal lactose to what is called “beta-lactose.” While beta-lactise is the same, sugar, it is different because it is a broken down, smaller form of the sugar. This form of the sugar is easier to digest and cause a person to be hunger much quicker.

Also, did you know that milk naturally separates. The fat floats to the top, which is what cheese is made of. The fat floats because it is much lighter than the sugars and nutrients in the milk. However, this doesn’t happen once milk is pasteurized, it under goes another process called “homogenization.” Homogenization is the mixing of two unlike liquids and forcing them to become one. Because the fat is lighter then the rest of the milk, and floats, the milk companies force the to agents together to make what we call milk. This gets me thinking, what is in “Fat Free milk” and “Fat Free Cheese”?

I wonder this because all milks under go this process and cheese are made from milk fat. When the milk hasn’t gone through homogenization, and the fat floats to the top, the liquid is usually an off white color, almost a grey color and the fat is what is white. When looking at “Fat Free Milk” it looks exactly the same as the rest of the milks, so I start to wonder what the companies put in the milk. Also, if the fat free milk isn’t made of milk fat, like the normal cheeses are, then what does the dairy companies make cheese from?

Skim milk. If you are ingesting fat free dairy products, then you are ingesting skim milk. Of course it is easier to print “skim milk” on the labels, but not many people know that skim milk and fat free milk is all the same. Also, because society is more concerned with “fat free products,” they label it “fat free” to make profit.