We Are Paramore: The Trio’s NYC Comeback 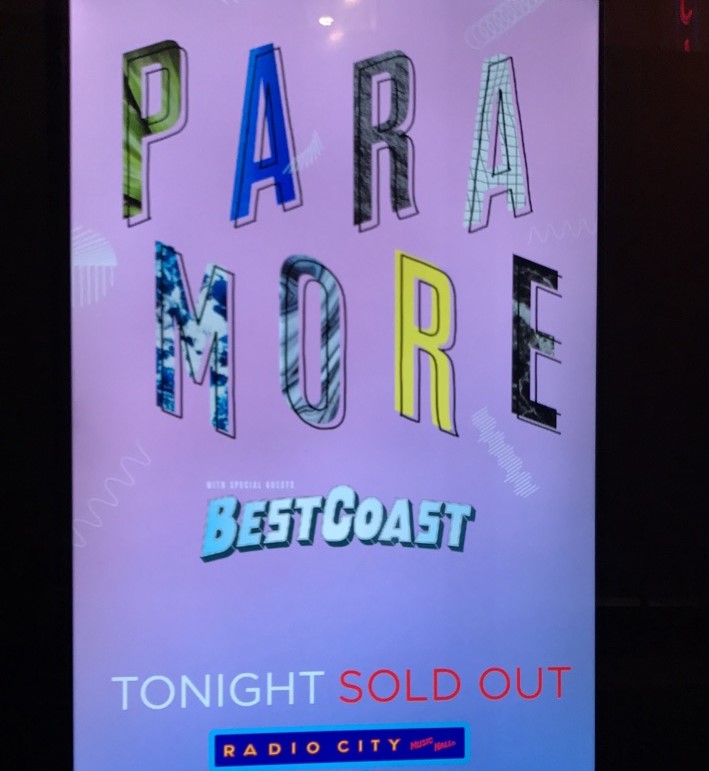 Its been about a month since my presence at the Paramore concert at Radio City Music Hall and I still can’t watch back my concert videos without almost throwing my phone against the wall from excitement.

Paramore decided to leave their NYC fandom “shook” when they announced their North American tour, which was creatively titled Tour Two.

Their North Ameican Tour was announced earlier this year on May 15, not long after their 5th studio album release of After Laughter on May 12.

I remember scrolling through Instagram the day the band’s official account released the tour poster with various North American dates. During that time many of the musical artists I was following announced their high volume tours but completely forgot to add a tour date in the city that never sleeps. Thanks for getting my hopes up Banks and Lana Del Rey.

With my luck, I had a feeling Paramore wasn’t going to perform in NYC. As I slowly zoomed into the Instagram post, I quickly referred my eyes to the cities closest to New York as a last resort in case they were ones to add to the list of weirdly ignoring NYC once again.

But there it was- Oct 4 New York, NY @ Radio City Music Hall. I was actually on the subway on my way home from work when I saw the news. As ecstatic as I was, I couldn’t really scream on the train, although if I did, people would most likely mind their business as other New Yorkers would pass this off as just another day in the big city.

Another reason for my pessimism is that Paramore hasn’t done a solo performance in NYC since 2013 in Madison Square Garden. The concert drought was now over.

Aside from lead singer, Hayley Williams being one of my ultimate girl crushes, Paramore is one of the only bands that fueled my love for music.

I have fallen into the deep hole of the rock/pop music scene beginning at only eight years old. I say eight years old since that was my age during the year of the release of Paramore’s first album, All We Know is Falling.

As a young girl this was one of the first times I actually understood the lyrics of a song instead of liking a song solely for it’s funky beat.

I know what you’re thinking, how could an eight year old girl understand anything along the lines of life struggles and love? Well you know what, I may have not fully understood the meaning the first time around but as I got older, you bet I re-listened to those lyrics time and time again.

Also, no other artist at the time, had the simultaneous mellow and hardcore rock sound as Paramore.

As the years went on, I greatly followed their discography. Soon after it was Riot! which I still remember playing 24/7  on my CD player, then my personal favorite Brand New Eyes, next their self-titled album Paramore, leading into today’s After Laughter.

After Laughter is one album that is greatly different from all the others. It still has a little of the dark rock vibe with heavy guitar, but is now more pop and filled with more ballad-like songs than before.

I was originally going to go to the concert with my best friend Arleen, but she wasn’t able to make it. We’ve bonded through many topics in high school, but when we first met in sophomore year, Paramore was one of them.

I thought it was finally going to be the day we got to experience the one thing we truly love together, but it didn’t happen. Hopefully, if Paramore decides to not wait another four years to return to NYC, we can finally head bang in the crowd alongside Hayley.

I was afraid I was going to end up going alone, or even worse, with somebody who doesn’t know any of their music for the purpose of me not going alone.

I ended up going with my younger sister, who isn’t really a fan to the extent I am, but at least she knew a few songs so that’s the bright side.

The setlist consisted of songs mainly from After Laughter, and being that this would be the first time I would see them live, I was hoping for more of a meshed setlist of all the albums to take me to a place where I would have been if I didn’t miss their previous tours.

Personally, I believe it would have been more enjoyable if they removed the two covered songs from the playlist and played some of their original work.

I had no idea what either of the songs they were covering was beforehand, and was pretty much standing still the whole time. I mean yeah, some would say the songs had “jump-along” beats to them like “Scooby’s in the Back,” but it was so far from Paramore’s sound, I couldn’t even fake excitement.

Don’t get me wrong, I totally understand wanting to change it up at your own concert but as a first timer, I would rather have a quick taste of 2005 Paramore.

I did enjoy their performances of my favorite Paramore throwbacks such as, “Playing God.” “Ignorance,” “Brick by Boring Brick” and the iconic “Misery Business.” “Misery Business” is the song that everyone knows even if they aren’t dedicated members of the Paramore fandom.

Hayley Williams’ mesmerizing head banging took my soul away. Don’t ask me how she makes something as crazy as that look as cute as she does.

Stage effects and lighting are basically one of the main aspects of a concert that make me want to actually photograph aside from taking 10 million videos that will eventually take up all my phone storage.

In Paramore’s case, the stage lighting was on another level. The eclectic range of colors and slow to rapid transitions of the light show made for some great images. The room’s mood changed in instants, from a bright pop of neon green to circular hues of blue. 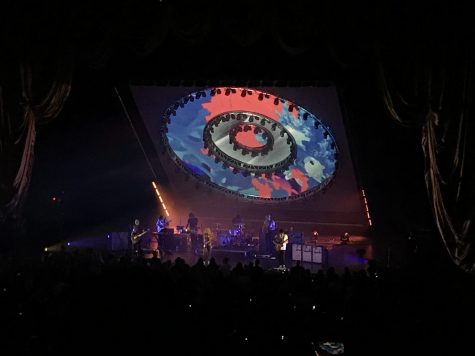 Little eight-year-old Nicole wouldn’t even have dreamed of this day actually coming true.

It’s one hell of an experience to still feel the energy of the performers radiate through the large venue, even if you’re not 10 feet away from them.

Overall, if you ask me to sing any song from any of their albums, I’ll recite all the lyrics from memory without a doubt. Also, give me the name of any Paramore song and I’ll tell you which album it’s from without hesitation.

Now that I’m 20, and wearing my Tour Two merchandise tee as I write this, Paramore clearly isn’t even close to fading from my life.
“If you don’t feel alive enough, just create something” – Hayley Williams