Why Netflix’s “Big Mouth” Is Actually Our Childhood

We've all blamed it on the hormone monster at least once. 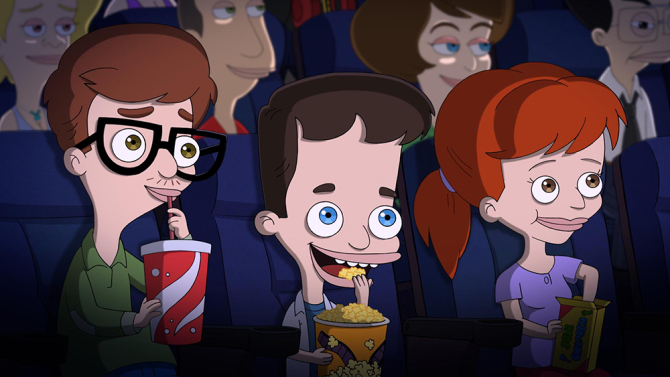 We’ve all had those moments when we were just beginning puberty and didn’t know what the hell anything means. Or in my case, seconds away from calling 911 to report impending death by exsanguination at the hands of my first period.

At one moment or another, we’re all young tweens that are confused about the new changes occurring in our bodies. Although some may have gotten the luxury of exchanging those type of conversations with a parent, many of us may be unlucky in that department.

Over the winter break, besides going to work, I binge watched a couple of shows, as per usual. Aside from re-watching Dexter for the millionth time, and deeply examining Black Mirror with my friends over text, I also felt the need to watch a show with more comedic elements similar to Family Guy and Archer.

I spotted Big Mouth under the “Trending Now” category and was automatically inclined to read the description of the show. Historically, shows that are animated were typically established for child audiences. The irony of altering a concept that was primarily for children and creating adult humor from it is truly captivating—it provides a sense of nostalgia, but with dirty jokes.

This series is unique in the fact that it is still considered a show for mature audiences despite the primary cast being children, more specifically middle schoolers. The show follows tweens during the most confusing years of their life: puberty.

Creators Nick Kroll and Andrew Goldberg, who are also childhood friends, emulate their adolescent years growing up in the suburbs of New York. Kroll voices his fictional self, Nick Birch, and comedian John Mulaney voices his best friend, Andrew Glouberman, in place of Goldberg.

Although most of the characters are inexperienced, Nick is shown as a pre-adolescent boy who is a late bloomer compared to his best friend Andrew. He feels underwhelmed most of the time knowing his body is much “smaller” compared to Andrew’s after accidentally seeing him naked at a sleepover in the first episode.

His parents are extremely open to discussions of any matter, and do not dismiss any of their children’s exploratory actions. Nick is the youngest and finds himself hesitant but interested in asking his older sister Leah and older brother Judd about life after puberty. Being the youngest of the pack, Nick is constantly babied by his mother Diane and his oversharing father Elliot, which in turn makes Nick more eager to experience the unknown.

Jay Bilzerian, the one friend of the crew that nobody actually likes but still sticks around anyway, only has two topics of conversation each time he opens his mouth—sex and magic. He is the overactive one of the group and has no real ambition. He could care less about acting in a proper manner in public and respecting the space of others around him. He’d much rather be intimate with his pillow that he turned into a sex toy by cutting a slit and stuffing it with ziplock bags of soup. At one point in the season, the pillow even gets pregnant which makes for great comedy.

Jessi Glaser is a sarcastic character and isn’t presented as the typical “girly girl.” She is strong-willed and doesn’t take any disrespect from her peers. Her journey with puberty begins after her experience with getting her first period on a school trip. She, unfortunately, wound up wearing white shorts that day which is a fear that was instilled into every young girl’s mind as a child. As she bears dealing with an embarrassment most girls may experience in their lifetime, the hormone monstress, “Connie”, soon arrives to her aid. Connie—voiced by Maya Rudolph—is much less crude than Maurice, is also a personified version of Jessi’s hormones. We then follow her journey through female exploration, whether it’s forcing her mother to purchase a racy red bra, or her first “meeting” with her chatty vagina—voiced by Kristen Wiig—for the first time through a handheld mirror.

Missy, also perceived as the nerd, isn’t shown much in the series until she becomes Andrew’s first girlfriend. She has intense feelings for Andrew, but tends to stifle her sexual desires as her interracial parents are very strict.

Big Mouth is a series unlike any other and isn’t afraid to break barriers on the topic of puberty without any elements of sugarcoating. Out of the 10 episodes in the series, there is bound to be an element one will relate to their own personal childhood experience. After the pilot aired in Sept. of 2017, it was announced only a month later, that Big Mouth would be renewed for a second season, which is planned to be released sometime this year. Until then, I’ll keep rewatching the same 30 minute episodes like its the first time I’ve ever heard of it.