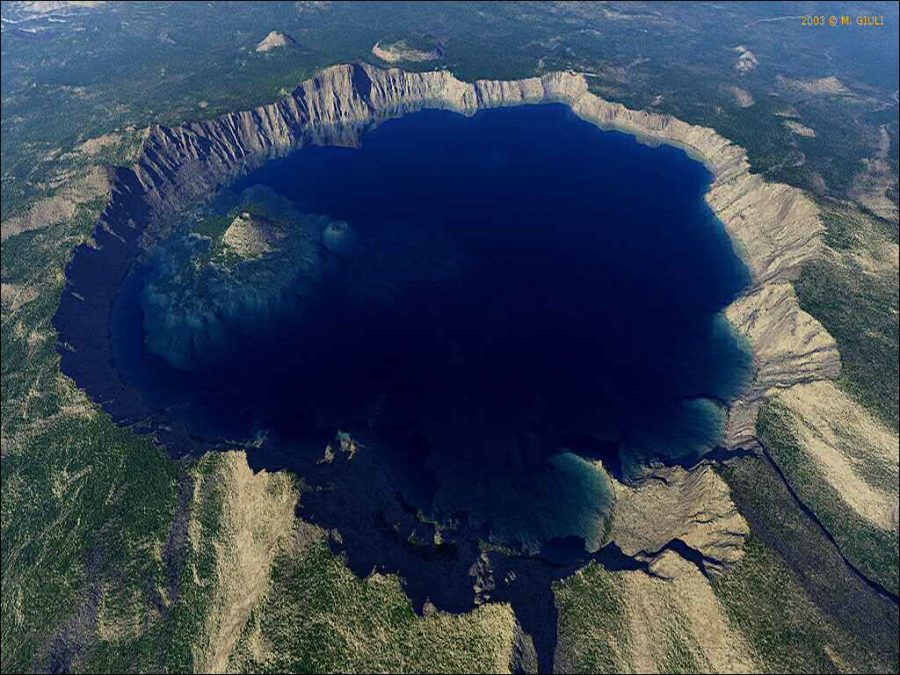 Ever seen something so jaw dropping it takes your breath away? Ever experience just what Mother Nature can do? Crater Lake is all land made and is breathtaking.

Crater Lake is classified as a caldera lake, a lake that is formed when a volcano erupts and collapses in on itself, leaving a crater behind, that was formed around 8,000 years ago when Mount Mazama collapsed from its famous eruption. The lake is located in south-central Oregon. Crater Lake is most famous for its deep blue color and water clarity. There are no rivers flowing into or out of the lake; the evaporation is compensated for by rainfall and snowfall at the rate of total replacement of the water at every 250 years. At its deepest point the lake is 1,946 feet deep and that makes it the deepest lake in the United States.

Crater Lake is also known for the “Old Man of the Lake,” a full-sized tree which is now a stump that has been bobbing vertically in the lake for well over a century. The low temperature of the water has slowed down the decomposition of the wood. The lake has 2 small islands; Wizard Island, which is located near the western shore of the lake. Wizard Island is approximately 316 acres in size and the National Park offers boat rides out to the island for a fee. Finally, there is Phantom Ship, a natural rock pillar that is near the southern shore. 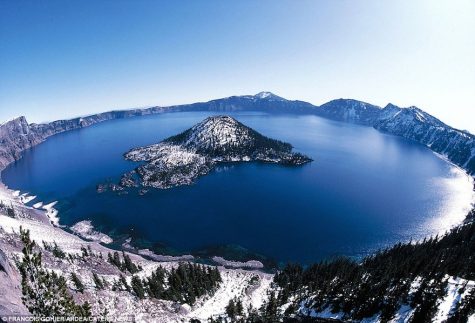 I learned about Crater Lake in the 4th Grade. There is a children’s story that goes with the formation of the lake and Mount Mazama. There is a phrase that goes with the story; ‘Grew, Blew, Fell, and Fill. Each word has a meaning, Grew, has in Mount Mazama rose to an approximate height of 12,000 feet above sea level. The caldera wall displays the geologic layering of lava flows through time. Blew; When Mount Mazama erupted catastrophically, blowing out about 12 miles wide of magma as pyroclastic materials. A volume of about 10-13 miles of mountaintop had disappeared. Fell; Mount Mazama did not blow its top off, it collapsed in on itself. Leaving no support for this massive dome, the roof of the magma chamber collapsed, forming the bowl-shape depression there is today. Finally, the Fill; About 5,000 to 6,000 years ago, the accumulation of rain and snow filled the caldera. It took perhaps 250 years for the caldera to fill to its present-day lake level, which is maintained by a balance between precipitation and evaporation plus seepage.

In 2006, when I was 9 years old, I got the chance with my little brother’s cub scout troop to go to Crater Lake. First getting there takes a lot longer than I thought, it took around 4 hours with stops. The reason it felt so long was we were climbing a mountain, literally, in order to get to the lake, you have to drive up the mountain side to get to the top. We went from an elevation of 40 feet to 6,178 feet. Before we even took a step, we were all out of breath. The downside to going to Crater Lake was we couldn’t find somewhere to sleep for the night. The troop’s planned spot fell through so after an hour or two of searching we ended up in a little camping spot right by the park and slept in our cars. It was so cold my dad would have to turn the car on every few hours to keep us warm. By the next morning, after some PB&J, we all took the short walk over to the lake entrance, since the lake is in a crater you have to walk down the side of the caldera. That walk just about killed me, I told my dad to leave me on the trail, thank God there were benches on each corner. 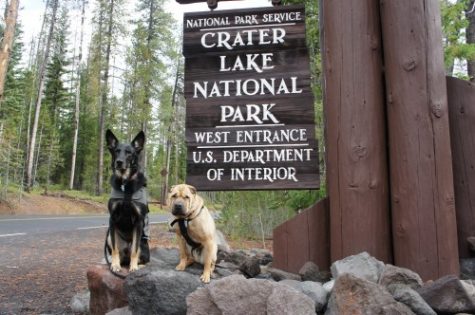 After what felt like an hour we finally made it down to the lake. The pictures don’t do the lake justice, grant it there are amazing pictures of the lake but it’s so blue and clear that no picture can truly get when someone experiences it in person. We went on a boot tour around the lake and got to see the difference in the depth and the different shades of blue. After our fun boot ride, we just hung out on the water’s edge having lunch when we heard some splashing. Turns out there is a rock cliff that you are allowed to drive off of. Of course, you have to be older and a good swimmer to jump of there, but we were able to swim around a little in the shallow area and hunt for salamanders. 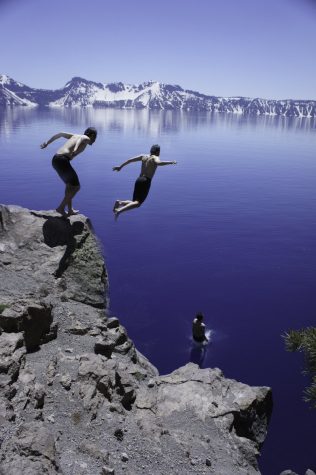 Even though I’ve only been to Crater Lake once I think it’s one of those places everyone has to see. I can’t wait to go back and get a chance to experience this insanely gorgeous lake with all its beauty!