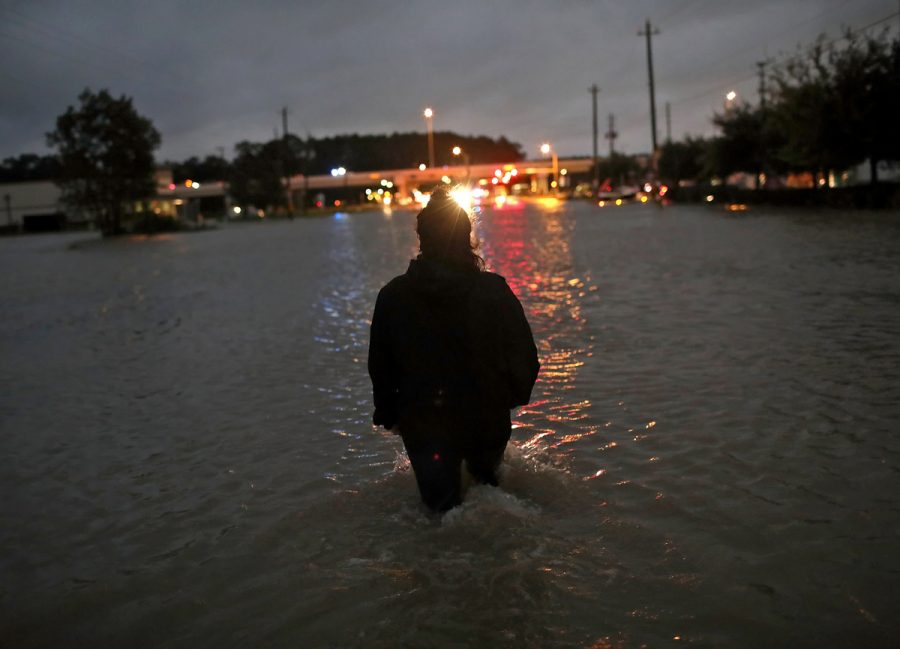 A Houston resident walks through waist-deep water while evacuating her home after severe flooding following Hurricane Harvey in north Houston.

Everything is moving so fast and I’m stuck in the middle of a massive cyclone, not moving an inch. Just looking up, as my life gets uprooted, rained on, and flooded. I watch as everything sinks all around me, as people float away. Everything I thought I needed, worked for, had in my possession, gets torn from my hands and is washed away and it leaves us with nothing.

Growing up, while everyone else had a job in high school, I still could not get one. I always had to depend on my parents, and I hated it. When I finally got my first job in college, I was over the moon with happiness. Being independent is what I longed for. It meant I was closer to being on my own and as the years went on and as I changed jobs; I made sure to never go without a job for too long. Mostly because I wanted to help my mom whenever I could. I noticed my mom was her happiest when she had my help. That’s all my mom ever needed was someone to acknowledge her need for help so it wouldn’t just be on her.

Since I had a job, I was able to be more social. I made time for my friends and even had a boyfriend. My social life was getting better. I only had to focus on work and school.

A hurricane is coming.

Since I started working, I noticed that Sundays in retail were very important. Some jobs gave you the day off, some jobs needed you every Sunday, other jobs: every other Sunday. If you’re a Christian, you go to church on Sunday. It was a constant battle to get those days off. It affected my spiritual life. I wasn’t at church as often, which meant my spiritual man was dying because it wasn’t being fed. I was concerned about helping myself and others, not about my well-being. My mental health was eroding, my spiritual man was depleting. I was making money, but I was dying inside.

A hurricane is brewing.

College was something I looked forward to. I have never been an A+ student. I always just passed. In the fall semester, I wanted to give it my best. I wanted to excel. When I started that semester, I felt it. I felt like everything was coming together for my own good. I was balancing everything perfectly: my chores, work, school. I was on time and inventing new ways to work faster and better in my work environment.

While I was on my way to work, a car hit me.  The car tried to pass us but then ended up hitting us from the side. I was thrown forward, but I didn’t fall. We went to the side of the road. I was confused and laughing because it wasn’t that bad of an accident. Everyone asked if I was okay. I felt fine; just a slight pain in my back. I called a cab to go to work right after that. I did not want to be late. I was doing so well. Everything was going perfectly. I couldn’t mess it up. I called a Lyft, but he told me he wouldn’t take me and that I should wait for an ambulance.  Maybe he was sent to help me because I didn’t want to listen to anyone else but to him.

I was confused. He was saying the same thing, my boyfriend, my parents, and my aunt were telling me. I just wanted to go to work and not have to call out. At that moment, I wished the day could restart. There I was, on the side of a highway right by the park. People were passing me by as I walked through a field of grass getting bitten by bugs, close to tears. A guy on a bicycle riding by asked if I was okay. I told him “yes” and then broke down crying.

The hurricane has made landfall.

I spent most of my afternoon at the hospital. Everything was being tested, and the doctors said I was fine, so I went home.

A couple of days later:

My mom set me up with some new doctors, so I got checked out. I was in excruciating pain in the waiting room. When I was finished seeing my doctor, my spine was on fire. He said I would need multiple MRIs.

I went to get MRIs as my doctor suggested. It took a couple of weeks because it was multiple parts of my body. The results came back. They found tears in both of my shoulders and four dislocated disks in my spine. I had to go on leave from my job. I could not work, but I thought I would be back soon. With every month that passed, those chances became less and less. I began feeling depressed. I took pride in helping my mom and being able to help myself. Then a letter came saying I’d been let go.

What happens to you when the things you take pride in are taken away from you?

Anger, frustration, and guilt happen. The desire to control the surrounding things becomes a need. Sometimes you feel as if you are losing your mind.

My parents had to give me everything and do the things I couldn’t do. I could not lift things or bend over for a while. Some of my chores had to be done by them. They had to cover all my expenses. It was as if the clock went back and I became 15 again.

College was harder than ever because I could not concentrate. My already cluttered mind, that couldn’t remember most things, was filled with these new stresses. I was behind on work and I kept falling further behind, but I couldn’t get out of my head to actually work. I kept replaying scenarios in my head where I listened to my instinct and took the bus. I kept wondering if it would have been easier if I had just died that day. My mind was a cesspool filled with sewage, overflowing.

I cried every night as I realized how alone I was. My friends didn’t check up on me as I wanted them to. I put myself in their situation and as a friend, I would have done more if they were in my shoes. I felt like a burden to everyone was around me. It was obvious the pressure was getting to everyone, especially my parents, I couldn’t do anything but cry when they were angry at me. I wanted to disappear. If I’m being honest, I wanted to die.

I was drowning with tides rushing in and keeping me under. Coming up for air and floating every now and again.

In the brief moments that I was floating on top of the water, I looked at the sky searching for a silver lining; needing strength; needing patience; searching for hope. I’ve begged God countless times to help me. Then every time He spoke to me, I felt peace. My heart was at peace. I was in the storm’s eye. When I feel like the tides come in and the winds are blowing, I remember this verse.

“And we know that all things work together for good to them that love God, to those who are called according to his purpose.”

This hurricane was for my good. It has brought me closer to God because my job stopped me from evolving spiritually. I gained a sense of pride in worldly treasures, and I had no time for God. I put all my trust in myself and none in him. I was putting my job before my physical, mental, and spiritual health. That came to a stop when the hurricane destroyed everything, but then everything was revealed.

The new year came, and I was focused on getting better. I was finding creative ways to keep myself busy and having more happy days than sad ones. I am now focusing on healing and digging myself out of the destruction and recovering.