Diary of a Nutella Addict: 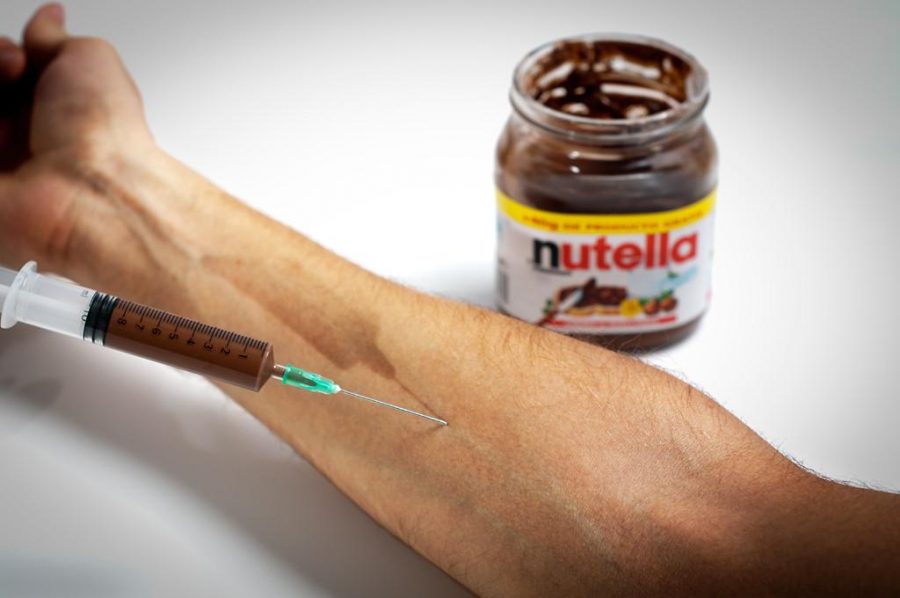 Then theirs me.
The girl who’s drug of choice, does not ooze out of a needle or breeze out of a rolled up substance. However my drug comes straight from a 13 ounce jar. No it is not liquor, yet it does make me warm inside.

I am apart of the 11 million people who purchase Nutella annually. Who knew all it took to make my tongue salivate like a 10 year old obese kid, was some Cocoa, Sugar, fats, oil and hazelnuts?

I can still remember the first time my lips touched that beautiful concoction.

It was an accident.

For about a year I would hear classmates, people on the train, or see Facebook posts about how amazing Nutella was, however i did not believe the hype.

I kept thinking “Eww, hazelnuts! who would eat that?”, not knowing i would soon be another to conform. Being that I am allergic to every nut except for Peanuts, i thought for sure my throat would swell up if i even thought about trying anything with hazelnuts. I cant eat Pistachios, Pecans, Walnuts, Pralines or any other nuts without my tongue swelling, or my throat feeling like i have 20 hair balls stuck inside.

So trying Nutella was definitely not on my list, until this summer.
While i was working as a senior counselor for Kafele Day camp, my boss came upstairs with a plate full of pastries, muffins, donuts and rolls.

After my campers ate pretty much every chocolate chip muffin or doughnut in site; there were only croissant pastries with filling in them.

I saw a brown like color and assumed my filling was either raspberry or chocolate. Boy was i wrong, the moment i bit into the pastry, i knew my life was changed forever.

I could not Quite figure out what i was tasting, at first I thought it was peanut butter and chocolate or maybe a Hershey’s spread. However it wasn’t until two minutes later that i blurted out, “Nutella!”, in front of my campers and staff; that I realized I finally understood why people dedicated their Facebook posts and tweets to such a marvelous spread.

After bulged eyes and laughter, one of my co workers confirmed it was indeed nutella that i just had the pleasure of devouring.

After that, the rest is history.

Since then my love for it has gotten so bad, I cant go a day without buying A toasted chocolate Chip bagel, with Nutella spread on it at the schools cafeteria. The Mercy Victory cafe staff member who i see everyday, doesn’t even take my order any more. At this point she just points at me and asks, “The usual?”. And like the addict i am, I just grin, stick out my chin, squint my eyes and nod proudly.

The cafe should pay me for advertising, because ever since i have bought the “ChocochipBageltella”, as i call it, more students have requested it. I even get high fives sometimes when i see people ordering it. Guess you can call me a trendsetter, by the time the clock strikes 3pm, there are no more chocolate chip bagels.

The fact that it was invented in 1946, baffles me. What have i been doing all my life, that i never realized one thing that adds joy to many days. I guarantee in a few years someone will make national Nutella day a thing. If Columbus can have his own day for stumbling upon land, nutella surely is worthy. I noticed on 23rd street in Manhattan, New York there are 3 nutella stores side by side of each other who sell huge jars of it. It is that important to people, that if one store would overflow with customers, they have two other ones to enter.

I recently read on the Dailymail.com, that A jar of nutella is sold every 2.5 seconds globally. The company produces enough each year to create a smear of spread that would circle the world 1.4 times. Stacked up, the jars would build 22,000 Big Bens, which is the famous clock tower in London.

I look forward to trying Nutella Ice cream, Cookies, Waffles, Muffins, Pancakes, Pizza and everything else nutella can be made with or smeared on. If i get sick, at least i will be satisfied.