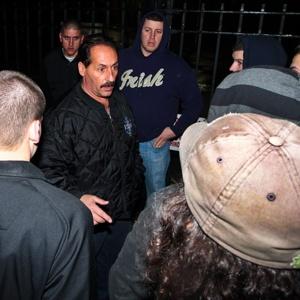 Since last night, I had no idea what kind of blog I was going to write this morning. No sense of direction.

When I woke up, I watched a disturbing video of my 18 year-old friend being turned away from the FDNY tutorial workshop that was being given in Jamaica, Queens last night. The reason seemed obvious, because he was white. Sixty other white males were turned away as well. According to the New York Post, there were about 110 black men only inside receiving test prep.

This is, of course, thanks to the Vulcan Society. The Vulcan Society was there turning away white males. One of the members told the New York Post, “he was told to admit people only if they had received a confirmation e-mail from the society, and that the decision had nothing to do with race.”

I’m sorry to burst their bubble, but my two friends and my boyfriend who are taking the FDNY exam, all received phone calls about the tutorial workshop, no email.

The events from last night are ridiculous. Especially coming from a group who has fought against the so called racism that the FDNY supposedly uses to keep black males away. For some odd reason, they won that case. Well they should not be racist the future white members.

I am going to make a valid point that everyone should consider.

If you could not fill out the application right to even take the exam, than you should not be a fire fighter. I do not want someone trying to save my life if you are incapable of filling out paper work.

I’ve seen practice FDNY books that they sell in Barnes & Noble (yes anyone could buy them, not just white people). The test is COMMON SENSE, which apparently most people are lacking these days. The test does not become extremely difficult until one gets into the Fire Department Academy.

Here is an example from the test that was discarded for being too bias against non-whites;

Q: When operating in a building which uses a standpipe system, it is necessary for a firefighter to maintain adequate pressure at the nozzle of the firefighting stream. The correct nozzle pressure is calculated by adding an additional 5 psi (pound per square inch) for each length of hose that is being used, to a constant starting base of 50 psi.

A: firefighting team is operating in a building with a standpipe system and is in the process of using 4 lengths of hose. The correct nozzle pressure that needs to be applied in this situation is: A) 50 psi, B) 60 psi, C) 70 psi, D) 80 psi.”

Basic math needs to be applied, not calculus or imaginary numbers (which I can’t stand, so I stopped taking math classes). If you haven’t gotten the answer already, it is C-70psi. Please, someone explain to me how this is in anyway bias. Every question on those types of exams, city exams, are about simple math and common sense. And the questions are almost the same, just in different wording to throw you off. If you can’t figure that out, please do not try to save my life.

The training and future exams after passing the entrance exams are only going to get harder.
I understand that the FDNY has been primarily white (especially Irish) but that does not mean that the whites have the upper hand. Honestly, the fire department is like a father-son relationship, a father (from strict families) always wants his boy to follow in his footsteps and that’s what it basically comes down too. Fire department is like a family run business, genorations following in their father’s steps. It has nothing to do with being racist, it’s just what’s been going on for years. It has been the norm for years. I agree it would be nice to see more non-whites in the force, but not at the cause of continuing this racism to whites now, because guess what, they did nothing wrong! They are not automatically cheating or what ever else people are saying just because they are white.
When inside, I hope the Vulcan Society doesn’t try to say that the course load and training is bias to non-whites. I’m getting extremely tired of hearing how things are still unfair to non-whites. Stay in school and make something of yourself. If school beyond high school isn’t your thing, then I get that, I know a lot of people like that. But education is key. Completing high school education will get you far within the civil service exams.

The FDNY took out it’s policy of having college credits to make things easier for people.

It’s all about common sense and basic math.

There are plenty of successful non-white Americans and non Americans out in the world today. They over came the obstacles and got where they needed to be. Stop trying to make this a racism issue. No one is trying to be racist, but to be honest, it makes it difficult to see everyone on a equal playing field to certain people want to throw the racism card out there. Then those certain people become racist to others. It’s a vicious cycle that needs to stop. Everyone needs to learn to let things go, especially if the grudge they hold did not even happen to them.

FDNY is about saving lives, not about being racist.

I want to make clear that these are my views, not the views of the IMPACT. It’s my blog and I wrote what I felt needed to be said.

Thank you and have a nice day.