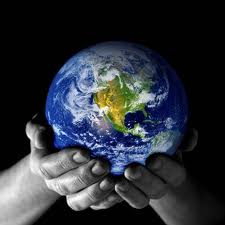 Earth Day!  The day of cleaning our planet began April 22, 1970. Since the hippies of the time lost their idol Jimi Hendrix and The Beatles released their final album, they needed something to do. The War in Vietnam was the main source of protest before the year 1970, but it wasn’t until 1970 that the hippies realized that air pollution was going to destroy the Earth.

Now we have Earth Day. Why am I bringing this up?

Well, Earth Day is almost upon us. This is the one day most of the world wants to pretend it cares about saving the Earth. When that should be 24/7, 365 days a year.

No, this is not a rant either.

As I was looking up random things on the internet. I came across a yahoo article about eco-friendly fashions. I clicked open the article.

What is a Solar Powered Bikini? Well it basically makes a women walking, talking, charging station.

The Solar Powered Bikini is made out of certain materials that can soak up the sun’s rays and women can use the bikini to charge their ipod or cell phone. Seems interesting enough.

Who came up with this idea for a solar powered bikini? Andrew Schneider, a Brooklyn native (figures all the trendy people live in Brooklyn!).

How much would it cost to own one of these bad boys? It cost just under $200. I would normally say that price is outrageous, but a swim suit from Victoria Secret’s cost almost that much and it does nothing spectacular!

It’s important to note that the bathing suit does not store the energy, the energy goes straight to the electronic. So you could bring your electronics dead or alive with you, and it will get charged.

Now if you are not into this bathing suit, I do not blame you. I’m not sure how I feel about it. People might ask to borrow your port and the wording could get out of hand. It could lead to sexual harassment and who wants that?

There are plenty of eco-friendly fashions out there but here is one that did not make it into production. There is an EPA dress that looks really pretty but not when it is in an area heavily polluted. Which is a lot of places. The EPA dress wrinkles up when it is in a area with bad air. I’m not sure if that would work in New York City, dressed would be going up everywhere.

If buying eco-friendly clothing is not your thing, I do suggest getting out there (even if it is just for that one day). There are plenty of things you could do to make you home eco-friendly if you are not about going out there and getting things done. Every little thing makes a difference.

Go see Chimpanzee, a documentary about Oscar, a young chimpanzee separated from his family. As with all the Disney documentaries that have been coming out every Earth day for the past couple of years. For every ticket bought, a certain amount of money will be donated to wildlife preservations.

If you’re on campus, April 20th, join Mercy in giving back on Service Day.  (It also looks good on a resume! But do not let that be your only motive).

There are plenty of things to do for Earth Day, instead of checking your Facebook for the millionth time, go Google Earth Day and get out there!