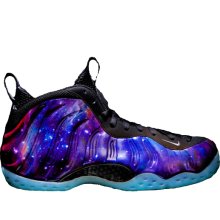 Sneaker fanatics have been sleeping on the streets of New York for days to snap up Nike’s newest item, a $220 glow-in-the-dark shoe.

The Foamposite Galaxy is being released Friday and dozens of excited fans have been camping outside shoe stores for days to ensure they snap up a pair.

After Jordan’s release of the Jordan 11 Concords, which was a few days before Christmas, the sneaker industry has made customers thirsty and hungry for more. Five people have been killed for their Concords here in New York City  alone and many had serious injuries.

The Galaxy shoe has created a frenzy as well.

At 10pm on Feb 24, hundreds of people packed in the Orlando, Florida Mall parking lot,  to buy the limited edition glow-in-the-dark shoe at midnight.   This weekend also happened to be the NBA All-Sstar weekend, which is the time most limited sneaker releases come out .

The Orlando mall parking lot turned into a riot that went into the early morning hours of the next day.  Police were there to attempt to secure the mall. Deputies lined up in front of the store, armed with shields, batons and tear gas. They even sent in a mounted patrol and a helicopter to monitor the crowds. Officers then blocked off the parking lot with their cruisers.

These people were ready to risk their lives for a pair of sneakers. What is this world coming to?

When the crowd refused to settle down, officials decided to call off the release of the limited edition Nike shoe. A deputy drove around the mall parking lot and made an announcement on a loudspeaker.

“Florida Mall is closed. Please leave the premises. This is an unlawful gathering. There is no shoe release tonight.”

That was when all the craziness began.  People started to jump over cops just to get into the line to guarantee a spot for purchase.

They were no death records but a few got arrested and there were also a handful of injuries. Most people who waited in line to buy a pair, weren’t actually  going to wear them but to sell them to make a profit.

On eBay and other websites the prices now range from $1500- $2000. Nike websites and all other websites who were having this item in stock had to cancel the release. In communities in Florida and New York all sneakers stores had to close down to make the community safe for others who live there.

It has also been reported that there has been a major amount of callouts from work and students skipping school to camp for a whole week living in the freezing cold with rations of food and water for a pair of sneakers.

How materialistic have some people become when they can spend $220 of their scarce resources on a pair of sneakers?

Nike shareholders and other stakeholders are laughing to the bank.