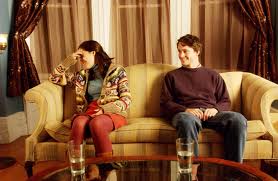 Adam, a lonely man with Asperger’s Syndrome, develops a relationship with his upstairs neighbor, Beth.

Welcome to the Valentine’s Day edition!

Yes, for most of us, it’s a day to remind us that while most of the world has someone to love, we have absolutely nothing. To celebrate this holiday created by a greeting card company I’ve decided to tackle one of my favorite romance films since it deals with a subject that I know all too well: Asperger’s Syndrome. Asperger’s Syndrome is a form of high functioning Autism. The symptoms of it are poor social behaviors, difficulty to look anyone in the eye, a fear of new places, new people and change and a fixation on one particular topic. I know this because I have Asperger’s, having been diagnosed with it for nearly a decade. When I found out about this film a few years back, I was incredibly excited and elated at the idea of it and in the five years since I saw it for the first time, it has always given me hope.

The story of Adam follows the titular character of Adam Raki, a man with Asperger’s syndrome who has recently lost his father. He soon meets Beth, a new tenant in his building who he soon starts a relationship with, all the while each one teaches the other something about life and love. The story is well made and incredibly endearing. The relationship between Adam and Beth is slowly built up as the two first get to know each other making it feel natural and all the while we learn more and more about our two main characters. The story follows the typical romance archetype: boy meets girl, boy losses girl at the end of the second act, boy… actually one great thing about the story is that it doesn’t end in the typical fashion as other films of its ilk. It manages to differentiate itself in a sea of similar, repetitive films and still manages to have a touching and happy ending. Another aspect that this film does very well is the obligatory end of second act break up. It’s a story technique that has been used numerous times throughout the many decades that film has existed and it’s one that has become predictable and painfully cliché. Adam does fall to this writing pitfall, however it handles itself perfectly, coming off as a situation that could happen rather than an eye rolling bad moment of writing. Not only that but it leads to a series of legitimately heart breaking moments that, for the most part, don’t have happy conclusions but for one moment in the film leads to a part in Adam’s development that’s truly uplifting. Lastly the film handles Adam’s Asperger’s very well. Adam’s personality, his routines and his approach to things such as meeting new people and doing things he’s never done before all feel very natural and the character does come off as truly having Asperger’s syndrome. It doesn’t get it’s information wrong, it doesn’t come off as showing Adam as a child or patronizes the character instead it shows that Asperger’s is a part of who Adam is and though I feel the film went over board when it came to Adam’s anger it pretty much got Asperger’s down to almost a tee.

The characters in Adam are likeable.

Adam is not only a likeable character but a character that I can greatly relate to. The moments that emphasize on his Asperger’s always seem real to me, there isn’t one moment that went by that I didn’t think about how I had gone through a similar situation. He’s a strong character that’s easy to latch on to and one that I always want to see win in the end.

Beth, in comparison, isn’t as much of a likeable character. For a majority of the film she’s very ignorant when it comes to Adam’s Asperger’s and even right off the bat assumes that he isn’t a dateable person. Even when she gets to know and falls in love with him it still mostly feels like she looks down at Adam like he’s some sort of child that has to be watched and disciplined if he does something that’s outside of her perceived norm. Even the obligatory second act break up is mostly her fault since she takes a situation that could have been easily diffused and made it worse. Still one cannot deny the strong motivation she is to Adam’s development, helping him come out of his shell and be a better person which he in turn does for her.

Acting for Adam is strong.

Hugh Dancy gives a great performance as Adam. Like his character he comes off as believable and never once falters in his performance.

Rose Byrne gives a good performance as Beth. Though good by herself, Byrne is much better when she’s with Dancy as the two work very well together and each manages to become one with their characters, especially in the moments when the two go through strenuous hardships.

Peter Gallagher does a good job as Marty Buchwald, Beth’s father. For the most part he plays his character as a nice guy but underneath it all he’s just a slimy, ignorant, SOB and as the film progresses you can see that Gallagher is playing his character as just that: A man who is hiding his true self under a visage that only comes out in his final moments in the film.

Frankie Faison does a very good job as Harlan, Adam’s closest and oldest friend. In a few scenes Faison is quite humorous but at many times he manages to give a moving and heartfelt performance, coming off as truly caring for Adam. His last scene in the film was one of his finer moments as he makes an already hard scene, one that I feel is even more difficult than Adam and Beth separating, even sadder.

Final Thoughts: Overall Adam is a well-made and truly endearing film. The acting is very good, the characters are mostly likeable and the story is good, having a true understanding of what Asperger’s is as well as giving both a touching and heart breaking story that has a silver lining at the end. I recommend this for anyone this Valentine’s Day be it a person who has someone else or someone who has no one at all, at least Adam can give you the hope that no matter who you are somewhere out there is a person for you.