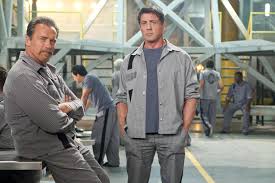 When a structural-security authority finds himself set up and incarcerated in the world’s most secret and secure prison, he has to use his skills to escape with help from the inside. Isn’t it just my luck that the film that has my name written all over it comes out at a time where it isn’t at all possible for me to see it? That unfortunately was the case with Escape Plan a film that teams up Stallone and Schwarzenegger for the first time. I’ve anticipated this film for the longest time and I’ve finally got my chance to see it. Did it match all the expectations I had of it or should it just do us all a favor and take a walk down the green mile? Let’s find out.

The story for Escape Plan isn’t the typical action flare that we’ve seen the film’s two star do over the past few years. It doesn’t have a tongue in cheek and self-knowing attitude and it doesn’t necessarily rely on corny clichés. In fact it doesn’t really have strong emphasis on action either, it instead focuses on its story. The story follows Ray Breslin, a man who breaks out of jails for a living to find out their weaknesses and to make them escape proof. After accepting an assignment to The Tomb, a prison that is believed to be inescapable, Breslin finds that he will never escape and must entrust the aid of a fellow inmate to help him escape. The best way I can describe the story in a whole is by comparing it to the portion of John Woo’s Face/Off when Archer finds himself locked in Erehwon prison; in fact the similarities are astounding such as each having roughly the same exact location for their inescapable prison. But I digress, comparing it to Face/Off isn’t a bad thing, that portion was one of my favorites in that film so to have a whole film dedicated to something like that is quite enjoyable. The story takes full advantage of its setting and its actors. We’re given intricate detail on how the prison works as well as Breslin’s plans to escape. While that might seem dull it’s actually the opposite, it’s interesting to see how everything works in the Tomb as well as Breslin’s clever ideas and attempts to escape. A majority of the story deals with both Breslin and Rottmayer (Schwarzenegger) working together so the actors can work off each other from start to finish and we’re thankfully given exactly what we paid for. The pacing is also well done; the film never rushes past anything and gives itself plenty of time to build up the plans and eventually delivering good payoff when the escape commences. There isn’t a lot of action in this story which I do feel works in its favor. The fact that I wasn’t bored with what was going on showed that it didn’t need nonstop action to be entertaining or to define itself. Unfortunately like the prisons Breslin breaks out of beforehand, this film has it’s escapable imperfections. For starters the film will occasionally go to the outside to focus on Breslin’s friends and co-workers trying to find him, however I feel we’re not given enough time to show how hard they’re looking or how difficult the search. Yes, the focus should be on Breslin, Rottmayer and their escape from the Tomb, however the uncaring focus on the characters working outside makes them feels underdeveloped and thus their time in this film pointless. The villains also have a surprising lack of back story which makes them feel rather weak. It does add an element of mystery, however it’s a mystery that’s never solved nor does the film give any effort to do so. There’s also a sort of surprise villain that not only comes off as obvious very quickly but his motivations are very confusing and in all honesty the film could have carried on more smoothly without him. All of that put together not only makes parts of the story feel weak but also makes the film feel unnecessarily padded out. Despite its flaws the story for Escape Plan is still an above average one for a film of this kind, opting to focus on a thinking story rather then relentless action and a meta personality.

The characters for Escape Plan are pretty good.

Breslin and Rottmayer are both pretty good characters. Like the story, the characters are different types then the actors are usually accustomed to. Breslin is a thinking man rather than a strong man, showing that he prefers to sit and wait as well as deceive his enemies rather than outright attacking them. Rottmayer mostly follows what Breslin tells him though his want to help Breslin does make him a valuable character. What I really like about the characters, especially in the case of Rottmayer, is that the story places bells throughout itself when it comes to them. The film will mostly be subtle with Breslin’s escape plans and Rottmayer’s character in a whole, however by a certain point or the end all the bells that have been placed are pulled and those certain things about the characters are explained which allows for some good rewatch value since now those things can be spotted on the first go and overall flow well with the characters and story.

Javed, a fellow inmate, is defined by one thing: His faith. Javed’s faith is constantly brought up in the film, he even uses it to deceive the system to help Breslin. He has no other defining traits other than the fact that he practices Islam… However that’s something that makes his character so good. Javed’s faith isn’t put into a bad light. Despite the violent acts he commits he never does so in the name of his religion and in fact for the most part it’s his faith that keeps him in line. Javed is a good character because he is not a violent stereotype that the media has built up over the years and in all honesty his final moments are actually very touching.

The remainder of the characters come off as weak, underdeveloped or forgettable. Hobbes, out main antagonist, has a good sadistic nature to him however that alone really isn’t enough to make him a good villain. He has no backstory, no real agenda and lacks the charisma that makes for a good villain. Drake, Hobbes’ right hand man, has even less to him just coming off as a simple, violent grunt. Dr. Kyrie is a character that actually has really good elements to him, being that he is a sympathetic character who doesn’t do anything out of evil, but we see so little of him that in the end he feels more like forced deus ex machina. Abigale and Hush, Breslin’s friends on the outside, also had the makings of some really interesting characters but overall there just wasn’t enough to them and they come off as severely underdeveloped.

Acting for Escape Plan is quite good.

Stallone and Schwarzenegger both do good jobs as Breslin and Rottmayer. Both actors work perfectly together and are at their best when they are, each working off the other naturally. Schwarzenegger has some very good moments, one especially where he had to bable incoherently in German to distract Hobbes, a scene that was both well done and quite humorous. Sadly though I feel that in a whole this is a Stallone vehicle. Most of the attention falls on Breslin and by the third act it’s Breslin who saves the day. Schwarzenegger isn’t even given permission to kill the lead henchman.

Faran Tahir does a great job as Javed. He manages to stand out from the rest the very moment he’s introduced. He manages to put real effort into every line of dialogue and every action in every scene he’s in.

Jim Caviezel does a good job as Hobbes. Despite what little he’s given to do Caviezel still manages to give an enjoyable and surprisingly intimidating performance as Hobbes.

Vinnie Jones, as always, does a fantastic job as Drake. Sadly there’s not a lot of real attention on him, for the most part he just stands around waiting to do something. However when he is allowed to actually do something he gives a very entertaining and unintentionally funny performance.

Despite his short performance, Sam Neil still managed to give a good performance as Dr. Kyrie. He comes off as conflicted and caring and though underused Neil’s presence is still appreciated.

I’m not fond of Curtis Jackson. Not as a musician and certainly not as an actor. I was afraid that every moment he was on screen I would be cringing non-stop. However his performance wasn’t half bad in Escape Plan. Perhaps it’s because he had very little screen time or perhaps it’s because his character had potential. Either way it was a surprisingly decent performance.

Lastly the action in Escape Plan is good. Despite lacking in action what little we get is good. There are a few fights laced here and there throughout the film and they’re pretty good, especially the first fight between Breslin and Rottmayer. The lack of action is more than made up by the end of the third act where we have a few good shootouts, a good, though brief, fight between Jones and Stallone and Schwarzengger having a tremendously memorable moment where he uses a powerful gun to take care of oncoming enemies. The last remaining action scenes are very exciting and satisfying and are am entertaining way to end this film.

Final Thoughts: Escape Plan, sadly didn’t meet all my expectations. Weak characters, some actors wasted and underdeveloped moments in the story kept this film from greatness. However, overall it was still a pretty good movie. The story focuses on the build up to the escape as well as the dynamic of the two lead actors over non-stop action, some characters are good enough to carry the film, the acting is good and the little action we get is solid and entertaining. It isn’t as good as Schwarzenegger’s returining film The Last Stand but it’s a Hell of a lot better than Stallone’s Bullet to the Head and I would recommend this to anyone who is a fan of either actor.