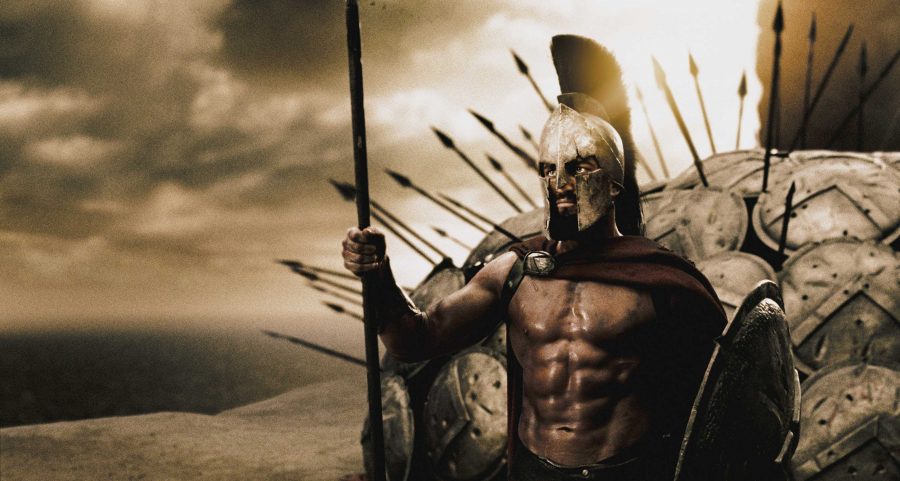 King Leonidas and a force of 300 men fight the Persians at Thermopylae in 480 B.C.  Several years after the release of 300 a sequel of sorts has been released. Though odd that they waited so long to make it I’m still nevertheless excited to see it. I remember seeing 300 in theaters with my dad when I was a young, stupid fourteen year old. I remember being wowed by the action scenes, mesmerized by the visuals and brought to tears by the ending. I adored 300 when it had come out seven years ago, however after watching it recently I came to a stunning revelation: Was 300 as good as the whole world had made it out to be back in the day?

The story for 300 is good. It follows the (historically inaccurate) battle of Thermopylae where 300 Spartans (in reality 7,000 combined Greeks that dwindled to 300 Spartans, 700 Thespians and 400 Thebans) held off a large force of Persian soldiers. The story centering on the Spartans is easily the film’s strongest suit as the plight that the Spartans face creates a strong conflict and the determination, bravery and camaraderie of the soldiers makes the story all the more engaging and dramatic. The film’s strong dialogue also adds to the engrossing nature of the story. The strong, moving speeches pulled me further and further into the film’s story and the regular dialogue itself was eloquent and well written. The story also has some very good moments of drama, so much so that at a few moments I forgot about the bloodshed and violence and was focused solely on the emotional moment that was happening. The story also has a very creative narrative structure. One strong criticism that the world has had with 300 is the depiction of the Persians. A majority of the Persian soldiers are shown to be ugly, barbaric and in many cases monstrous, such as the demonic look of the Immortals. People have criticized 300 for a racist and disgusting picture of Iranians and at a first glance I agreed. However, after some thinking I realized something: The story isn’t linear. We don’t go with Leonidas on his journey from the beginning to the end, instead we’re told about what happens from Dilios who in the present time is telling the story of the 300 Spartans. Leonidas at one point refers to Dilios as being a good story teller and that’s his role in the film as an unreliable narrator. As he tells the story he describes the Persians as being monsters when in reality they were normal men like him and the other Spartans. The story involving the battle of Thermopylae is well written and very riveting, unfortunately there’s a second aspect to the story involving Leonidas’ wife Queen Gorgo. Gorgo’s story involves her trying to convince the Spartan council to send reinforcements to aid Leonidas and though it adds more to the film I couldn’t help but be utterly bored by it. I find these parts of the film to be dull and uninteresting, having a very slow and monotonous pace. This part of the story also feels like nothing much gets done, with the same shtick happening again and again with Gorgo butting heads with the treacherous Theron. I can’t deny the necessity of these scenes however I can’t help but allow my mind to wander once we get to them.

The characters for 300 were possibly the most startling thing I realized upon rewatching.

In the whole film the one character that has the most developed, who solely has the spotlight on himself is Leonidas. Overall he is a good character, being a strong and selfless leader, however by having all the focus the remaining characters that are with him now suffer. There’s no emotional attachment to the other characters and as such when something bad happens to one I felt nothing. The main soldiers are very one dimensional, having no real personality or characteristics to themselves and exist just to take up space.

Xerxes is an imposing and memorable villain though even he lacks characters having only his arrogance and vanity to fall back on. Though having some strong moments with Leonidas, Xerxes is a one note villain who is only memorable due to the design of the character and the acting of Rodrigo Santoro.

Ephialtes, to me, is both a sympathetic character and a walking plot hole for the film. His sympathetic nature stems from being tossed aside by Leonidas when he had wanted to fight with the Spartans and despite his eventual betrayal I couldn’t help but understand and feel sorry for him. But the problem with his character deals with Leonidas’ decision. Leonidas angers Ephialtes and not moments after learning of the goat path behind the army’s division, something that Ephialtes told him about, states that he hopes no one finds it not seeming to care that the vengeful man who threatened him could betray their position. What also bothers me is Leonidas’ reasons for ending Ephialtes away. Due to his deformity Ephialtes cannot raise his shield and since that crucial in a phalanx he could fight with the Spartans. However we see that right after the first wave of Persians the Spartans quickly drop the phalanx strategy and opt instead to charge into battle, meaning he could have used Ephialtes. Yes, by the end Ephialtes had to betray the Spartans however everything leading up to his betrayal is just sloppy writing.

Queen Gorgo, despite having the hard luck of being in the dull potion of the film, is still nevertheless a good character. She’s not the most engaging or entertaining, in fact like her story she can be rather bland, however she has the admiring qualities of wanting to help both her husband and her home no matter the cost and that’s what makes her likeable.

Gerard Butler gives a good performance as Leonidas. In the action scene he is fierce, in moments duress he is energetic and loud and in dramatic moments he can give a surprising moving performance. His last scene in the film, to this day, still brings a tear to my eye.

Rodrigo Santoro gives a strong performance as Xerxes. He easily manages to be menacing and imposing, and this is when he’s calm and quiet. In his dire moments he can incredibly frightening and manages to give a pure, nightmarish personality to this otherwise one note character. But his finest moment as Xerxes comes at the end. Over the course of the film Xerxes fancied himself a god but when injured he’s shocked by his own mortality. In that one scene Santoro easily conveys Xerxes rage and fear with his facial expressions and by welling his eyes with tears.

Dominic West comes off as boring in this film, but that’s due to having not much to go on with his character Theron. It’s noticeable that he tries his best but sadly he comes off as dull and forgettable.

David Wenham gives a strong performance but in his narration. During the battle of Thermopylae Wenham is hardly noticeable, the means of how is character loses his eye are confusing and jarring. However his narration is very strong, adding a very human element to the narrative structure an once more pulling me further into the good parts of the story.

The action in 300 is beautifully made and very entertaining. Director Zack Snyder does a very good job with his action scenes, fully utilizing his style to his advantage. The action is visceral and energetic as is however Snyder manages to add more by using the slow motion camera effect. The slow motion makes the action more engaging by showing every detail of what’s happening even adding a feeling of pain when an enemy is hit. The slow motion isn’t over used so it’s never over done or unwelcomed. The music utilized greatly helps the action, making the energy even stronger. Sadly I can’t help but feel that as the action goes on it becomes shorter and shorter with many moments that could have been great only getting a small glance. I know that to have a good action film you have to blend story and action, too much of the latter makes for a dull film. However when you already have a strong enough story as is and the main draw being the battles it would make sense to show more rather than small bits and pieces.

The visual design of 300 is gorgeous. Despite a world that’s mostly CG everything comes out looking beautifully, making everything feel like a blend of reality and comic. The costumes are very well made and the creature designs are in many cases creative and frightful (which goes along splendidly with the film’s style of narration). Though if I must complain I’d have to say there’s too much brown in the film. The sky, the grass, the landscape, sure in some instances it looks nice and in some instances it makes sense. However it’s a problem because after a while it just starts to look drab which is unfortunate since everything is so well made and pleasing to look at.

Final thoughts: 300 isn’t the powerhouse film I remember being when I was younger. There’s a lack of characterization, a weak portion of the story as well as some plot holes and some acting and characters can be dull. However, there are good parts to the story and when they’re good they’re very good. The acting is good in many instances, the style is well made and pleasing to look at, if not a little repetitive after a while and the action is strong. Not as good as I remember and not as good as the world makes it out to be but overall 300 is still a creative and entertaining film.