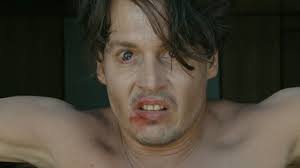 Careful over your spring break or you'll end up like Paul Kemp!

American journalist Paul Kemp takes on a freelance job in Puerto Rico for a local newspaper during the 1960s and struggles to find a balance between island culture and the expatriates who live there. I am not entirely familiar with the works of Hunter S. Thompson. I haven’t read any of his books or articles and I greatly detested the film Fear and Loathing in Las Vegas. To me it was nothing more than the vulgar escapades of two degenerate drug addicts that had no sense of the word story. True, it was the accounts of Thompson’s drug induced trip to Vegas but that is something that is better left as literature as the film itself was style over substance. The only thing that makes me happy about that movie is that fact that I saw it well over a year after seeing another adaptation of a Thompson novel, The Rum Diary. Had it been the other way around I may have never given this film a chance. And so, dear reader, since Spring Break has come to relieve us for a short time from studies and work, what better way to kick off our week of adventures and relaxation then with a story about one man’s adventure that is anything but relaxing.

The plot for The Rum Diary isn’t particularly strong. The story itself isn’t bad by any stretch of the word; in fact it has many interesting ideas to it. The story follows journalist Paul Kemp who has arrived in Puerto Rico to join the quickly failing San Juan Star. During his time he comes across corruption in the form of Hal Sanderson, a crooked land dealer whom Kemp soon wants to take down. It’s here that the story gets interesting as Kemp constantly runs into problems with journalism that mirror what’s happening today. Early on Kemp is told by his editor Lotterman to drop the cynicism of his stories, contempt for the tourist population and an investigation piece where he looks into the harsh, cruel lives of a village in favor of making it seem as if there are no problems or hardships in Puerto Rico since that’s what the readers and advertisers want. Lotterman himself soon becomes a symbol of everything that is wrong with journalism, caring only for selling papers instead of informing the masses and showing nothing but contempt and selfishness when to comes to the jobs and livelihood of his struggling employees. As with Lotterman, Kemp becomes a symbol of everything that journalism stands for, knowing when something is wrong and must be reported on and having to constantly fight those who want to put him down. The idea of journalism is a very interesting aspect of the story and adds a nice element of social commentary to the film but the main focus itself is relatively weak. Kemp is accosted by Sanderson not long after he lands in Puerto Rico. Throughout the first act Sanderson pulls Kemp deeper and deeper into a conspiracy to destroy the natural, beautiful land of Puerto Rico so he can makes hotels. This conspiracy soon boils down to Kemp and Sanderson becoming bitter enemies with the former wanting to bring down the latter. The thing is though; it feels as if the film doesn’t care much for this part of the story. When these moments are brought up it seems as if the film dials everything down and all the actions, dialogue and story developments feel like quite murmurs. As such there isn’t much strength to this aspect of the story. But in the end the story is still good. But how? If the main focus of the story doesn’t have much meat to it how is the story still good? How does it manage to bring me joy and keep me coming back for more? To put it plainly this is film that is not driven by it’s story but rather by it’s characters. The protagonists are incredibly likeable and a complete riot from start to finish. The dialogue for each character is unique and each one is funny in their own way. The characters have a good sense of depth to them and a level of intrigue. The antagonists are not likeable; however they still manage to spur a strong emotion from me every time. When we’re first introduced to Sanderson I can’t help but feel bile rising in my stomach. Even someone who hasn’t seen this movie knows what a sick, demented bastard he is. The characters easily manage to carry the entirety of the film and because of the sheer enjoyment each one brings the film does not, at all, feel like it’s two hour running time but surprisingly and sadly shorter. If there is anything else about the story I thought was actually strong and well made it would have to be the end. The ending is a real downer. Bad guys win; good guys lose, life sucks, Merry Christmas. However, despite that the ending is actually very refreshing to see the antagonist win even after the protagonists tried their hardest to get back. There is, however, a glimmer of hope in the end which overall adds a strong sense of realism to the story, essentially saying that no matter how bad things may be there’s always another day and always another chance to get back at the bad guys.

The characters, of course, are incredibly likeable for most and downright disgusting for some.

Paul Kemp is a very likeable character due to his honesty as a journalist and his tenacity to do what is right, to the point where, to borrow a line, he’s mad as Hell and won’t take it anymore. Kemp feels like an everyman, despite always wanting to do good he’s still a very imperfect man such as showing troubles with alcohol abuse. Despite his likeable tendencies Kemp comes off feeling like the story from time to time. There are moments where Kemp seems like he’s mumbling, like the film doesn’t seem to want to focus on him much and instead he gets drowned out by the supporting characters.

It took a few viewings of this film before I realized something about the character of Sanderson: He isn’t simply an arrogant, selfish, vicious, greedy man but rather a personification of the Devil. Throughout the first act Sanderson is very kind and charming, inviting Kemp to his home for lobster. But for a moment we see his true colors breakthrough in the form of threatening some men who are near his beach. He largely remains kind to Kemp, treating him as a friend but once Kemp is in his pocket, Sanderson drops the act. Just like the Devil, now that he has what he wants he can now be the spiteful bastard that he is, and every moment the character sickens me to no end.

Bob Sala has his moments of being a nuisance but overall is a likeable character. His kind, if not crude and short sighted, nature reveals itself the moment he meets Kemp and throughout the film shows what a good friend he is.

Lastly we have Moberg. Unfortunately Moberg doesn’t appear that often in the film but when he does an awkwardly hilarious scene is sure to ensue. Moberg is one of the closest things this film gets to being like Fear and Loathing: he’s a very bizarre and often times random character that often speaks gibberish but all the while makes sense when he does so. It isn’t long before Moberg is actually helpful to Kemp, a surprise since for a majority of his time he came off as random comic relief. Overall it doesn’t matter what Moberg does or what Moberg says, all that matters is that whenever he makes an appearance a hilariously quotable moment is bound to happen.

Acting for The Rum Diary is strong.

Over the past decade or so Johnny Depp has gotten into a rut with his acting abilities. He constantly plays the same one note performance, being very strange and surreal. It’s an act that was once praised but now seems to draw criticism since he’s playing the same character over and over again. Thankfully that isn’t the case with his performance in The Rum Diary. While the dialogue can drift into more surreal territory, Depp still manages to play his characters as calm and subdued, holding back from the absurd nature he has taken on in recent years. This allows him to give a much different and much needed performance that is both good and humorous.

Aaron Eckhart plays the role of Sanderson perfectly. He does manage to give the charade that he’s a nice guy but as the film goes on Eckhart’s performance becomes more and viler until finally he goes absolutely ballistic. There are people out there who will say that Eckhart’s most intimidating performance was Two Face in The Dark Knight, but the moments when he acts enraged in The Rum Diary, to me, are far more intimidating.

Michael Rispoli does a good job as Sala. He manages to play the role very convincingly and throughout the course of the film manages to work very well alongside Depp in both the comedic scenes and the dramatic scenes.

Giovanni Ribisi easily manages to steal the whole show with his performance as Moberg. Ribisi gives such intense commitment to his role that it feels like he completely becomes his character when he’s onscreen. Like his character Ribisi manages to be both memorable and hilarious without missing a step during the film.

Final Thoughts: Though the actual conflict of the story doesn’t carry much weight The Rum Diary, overall, is still a very good and entertaining film. The concepts of problems with journalism are interesting and well done, the humor is strong, the characters are very likeable and manage to carry the whole film and the acting is well done and hilarious. Easy to follow, well thought in some places and funny as all Hell, The Rum Diary is a film that any cautionary tourist should take with them during their spring break.