Do the Giants Regret Drafting Barkley over Darnold? 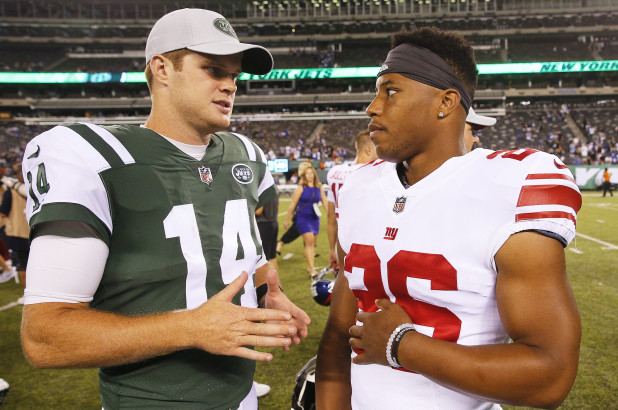 It’s been a rough first six weeks for the New York Giants. They are now in last place in the entire league with a record of 1-5 after getting crushed by the Philadelphia Eagles and over the last two seasons only the Cleveland Browns have a worse record than the Giants.

To make matters worse, they aren’t even getting good play out QB of Eli Manning. This leads me to believe that in this years draft when the Giants had the number two overall pick, they made a big mistake by drafting running back Saquon Barkley when they had an opportunity to draft a quarterback to set themselves up for the post Eli Manning era.

Without question Saquon Barkley was the best available player in the 2018 draft and will be an elite running back for years to come, but with a team like the Giants who were coming off a 3-13 season last year, and a quarterback who doesn’t have much time left in the league, it was the perfect chance for them to draft a young quarterback so that they could be set up to win in the future.

With their decision to draft Barkley, this showed that the front office believed that Eli had the ability to put together one or two more years of good football and that they were just a running back away from being a team that could possibly win nine or ten games and compete for a playoff spot. Obviously with their 1-5 record to start this season, they were way off with their expectations for this team.

Barkley has been the only bright spot for the Giants thus far. He has proven to this point why he will be one of the best backs in the league for the next 5-7 years. But what does any of that mean when you have a quarterback that often doesn’t look like he should be in the league anymore.

No matter how good Barkley will end up being, if you don’t have a quarterback the team will never be able to contend for championships. Just look at Barry Sanders who is the best running back of all time but no rings to show for it.

Now to be fair, a lot of Eli’s struggles have been a result of the offensive line which for the last three or four seasons has been one of the worst if not the worst in the entire league.

With the lack of protection that he has had he has been forced into making quick throws which has led to a lot of inaccurate passes and a lot of sacks. At 37 years old and someone who was never a mobile QB to begin with he just isn’t in any position to have success on the field.

Looking at all of the teams that took quarterbacks in the draft, it seems like they all have a lot of promise. With the Browns drafting Baker Mayfield it seems like they might have finally hit on a quarterback for the future. The Bills and Cardinals taking Josh Allen and Josh Rosen respectively, those two have also shown some bright spots for their teams.

And of course the elephant in the room with the team the Giants share a locker room with the New York Jets, taking Sam Darold, he seems to be the one that Giants fans would have most wanted to see them take.
If Darnold becomes an elite QB for the Jets for the next 10-12 years, Giants fans will never hear the end of it from the Jets fans on how he could have been their quarterback.

With the position the Giants are in right now it seems like they are heading towards getting one of the top picks in next years draft. Unfortunately to this point it does not appear that next years draft is going to have the depth at the quarterback position like this years did which would mean that the 2018 draft might have been their best chance to take a QB to have for the future.

Of course only time will tell whether or not drafting Barkley over a quarterback was right decision or not. Maybe none of the quarterbacks in the draft end up being stars in the league. But the odds of that happening are highly unlikely.