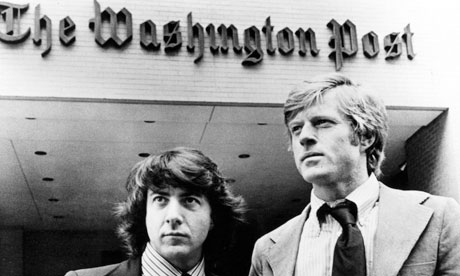 Journalism in the modern era has changed exponentially in the last century and it is difficult to say where it will be in the next decade or two, which leaves the modern journalist with a very hard decision to make. Do they continue down the same path that has been inclining ever since the turn of the Millennium or do they take drastic action to change the future of journalism and the way that modern society consumes news?

During the late 70’s and 80’s journalism in America was enjoying a boom period of interest and active participation in the industry due to the Washington Post breaking the Watergate story to the country. Woodward and Bernstein were they key individuals at the Post who managed to bring down the entire Nixon government and overnight became national heroes and advocates for investigative journalism and showed that not even the administration was safe. This had heads turning at colleges and news desks across the world and in a study in 1984 85% of Americans believed that everything they were reading in the newspaper was true and accurate to the better judgement of the journalist, and the remaining 15% said that human errors and mistakes led to them having doubts about the industry. In stark contract the same poll in 2005 showed that only 54% of the American people believed that what they were reading was the truth and that it was an agenda driven business with media bias and influence evident across the country. With the incessant need for speed the American public were demanding, it put a huge amount of pressure on the journalists to get a story out to them before anyone else did and this led to the having the highest amount of errors ever in American publishing. Breaking news used to be of national importance and could (but rarely) flash on American screens at any time regardless of what they were watching, whereas in todays society any news could be classed as breaking news and this was evident in the last few weeks when CNN cut off a congress woman when the ‘Breaking’ news of Justin Bieber’s arrest was occurring.

So is it safe to say that Journalism has changed for the worse in the last few decades? Newspaper sales are declining in a rapid free-fall that started only a few years ago and now everything is going digital, so is this better? Many of the old fashioned journalists out there are adamant that the only form of ‘true journalism’ is printed with ink onto paper and that’s that; the next generation however know that the public gets what the public wants and that is a high speed source of news media that they can quickly look at rather than having to take time out of their hectic lives to actually sit and read something like a newspaper. The older generation actually wanted to provide a public service and many of them spent entire careers devoted to the cause of a free and accurate press, they wanted to prove a point, they wanted to help and they wanted to exploit the fat cats in charge who were committing daylight robbery of the public at large. The generation Y journalists on the other hand are obsessed with a celebrity status, having thousands of followers on Twitter, attending all of the A-list parties and maybe one day getting to interview the stars, it’s a load of nonsense and we know it.

Journalism is changing and the killer edge that journalists used to have when it came to sniffing out a big story, getting the good quotes and the important news has become slicing things down to 140 characters and hoping some idiot clicks on the link. Modern journalists are constantly pumping out content on a daily basis and the majority of them don’t even care if people read the story they just want them to click the link so that they can show advertisers “look how many people read my post about the 7 things you’re doing wrong when you go to the bathroom”. The problem with Twitter is that people mindlessly retweet content without citing the original source and then a whole months work could be lost because some idiot with 4,000 followers tweeted your story and failed to mention it was you that wrote it, sure they can see that it’s your article on the actual site, but they only really care about that guy on Twitter. The news can also lose credibility when it comes to Twitter, when it comes to the real breaking news the hard hitting stuff people start to ‘live tweet’ about it and claim that it’s their story when really they are taking a conglomerate of news media tweets and updates and mashing them together to create their own version. Anyone can be a journalist on twitter and this is the key problem with current journalism but ironically it’s also one of the best because it gives real reporters a huge range of ideas and insights onto how to write a real news story.

Print media isn’t the only output that has been affected, television news has also changed drastically since the introduction of 24 hour news stations and huge company mergers. Journalism doesn’t really work without some elements of fear in the story and TV news has based it’s entire ethos around this constantly pumping out images and stories of crimes, hate and disaster, the public eats right out of the palm of the fat cats that run the stations and it’s now difficult to differ between reality and agenda. News used to be run by the people, for the people and now it’s controlled by one person and spoon fed to the nation like a mother only choosing one brand of baby food to give to her baby because the other brands contain some shit that Fox News says causes baby cancer. People now have predispositions about news stations and what they stand for and the companies are always coming up with new ways to get you to believe and actively participate with their output, this could be deemed as a success because we aren’t letting the news companies maintain a constant equilibrium when it comes to producing stories, they are actively trying to gain attention so they they can be funded by the advertisers, because when it boils down to it, that is what they depend on.

So to conclude it’s impossible to predict the future of journalism even in the next five or six years or so everything could change. In my opinion something has to happen to create a spark within the journalism community again, Woodward & Bernstein were the catalyst in the 1970’s and now I think modern journalism needs that kind of boost. The information is out there and Edward Snowdon has showed how easy it can be to call out the big government powers just like in the 70’s with the Watergate scandal. The only thing that is certain is that anyone taking steps into the journalism field now had better up their game because it’s a mine field out there, ready to explode.